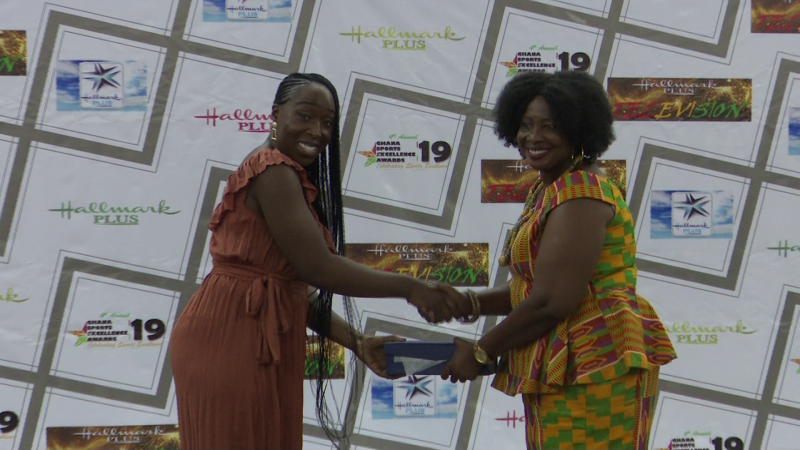 She emerged the Exceptional Diasporan Journalist at the 4th Annual Ghana Sports Excellence Awards, with Vincent Torgah and Benjamin Kwaku Azamati as the Unsung Hero and Exceptional Student Athlete, respectively.

Jeanette, an ex-world medal winning athlete under the umbrella of the United Kingdom has covered major sporting events around the globe.

She is arguably a genius, having written for the Guardian Newspaper, Daily Mirror and BT Sport.

She has also made contributions to various radio and TV shows including BBC Radio 1, Five Live and Colourful Radio.

The Ghanaian-Brit became the first British woman to reach the 100 metres final since Heather Oakes in 1984.

The athlete turned journalist was also the only African-European athlete to appear in the final.

In the final, she clocked 11.14, a personal best, to finish in sixth place.

Kwakye was the lead trainer on the set for 2012 British film Fast Girls, training Lily James and Lenora Crichlow for their respective roles as athletes.

In October 2016 Jeanette was part of a consortium involved with a takeover of English National League football team Dagenham & Redbridge.

Also, Vincent Torgah is currently a great force in West Africa’s golf fraternity, in view of his incredible victories.

In 2019, Vincent Torgah won The Masters on The African Tour for the third consecutive time, bringing his total win for 2019 to 6 and in the top two among ten tournaments in the 2019 season.

Vincent Torgah is currently the most successful golfer on the African Tour.

Last year, Azamati swept all the medals in the 100 meters race and 100x 4 heat from inter hall athletics to the West African University Games( WAUG) which was held in Port Harcourt in Nigeria and then to The Mini Ghana University Sports Association (GUSA).

He was a member of the male quartet (Sean Safo-Antwi, Martin Owusu-Antwi, Joseph Amoah and Benjamin Azamati) of the Black Spikes that won 4x100m gold medal at the African Games 2019 in Morocco.

The 4x100m team however was crowned the Exceptional Team of 2019.

Also, Total Ghana and Nestle Ghana were recognised for their Exceptional Contribution to sports development and promotions in the country.

The National Sports Authority (NSA) under the leadership of Professor Peter Twumasi was elugised for placing the state institution on track after torrid times, while Philippina Frimpong, an NSA administrator was acclaimed the Exceptional Female Sports Administrator of the Decade.

The event is held each year to honour outstanding sporting personalities who ensure that sports, in all various and myriad forms, happen successfully (administrators, media, athletes, volunteers, and other stakeholders of Ghanaian parentage, worldwide).

The Annual Ghana Sports Excellence awards scheme is proudly powered by its founder, Hallmark Plus, with support from local and international partners.