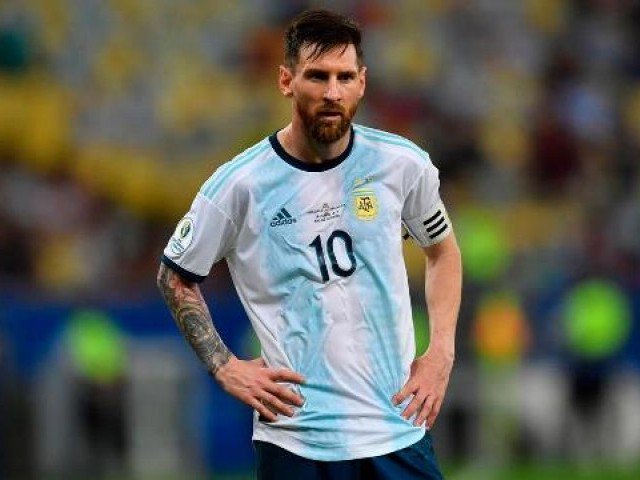 Football star, Lionel Messi has been handed a $1500 fine by South America’s football governing body, CONMEBOL, over his comments about the federation’s corruption during the recently concluded COPA America.

Messi will also be serving a game suspension for the red card he received against Chile in the tournament’s third-fourth playoff match, Goal.com reported. Messi was given his first red-card in a 14-year-long span and this decision did not go down well with the striker as he blasted CONMEBOL, saying the whole tournament was set up for Brazil’s win.

“There is no doubt, the whole thing is set up for Brazil. I hope the VAR (video assistant referee) and referees don’t play any part in the final and that Peru can compete but it looks tough to me.

I did not want to be part of this corruption, we shouldn’t have to be part of this disrespect we suffered during the Copa America. We could have gone further but we weren’t allowed into the final. Corruption, referees and all the rest stopped people from enjoying the football,” he had said.

Chile’s Gary Medal and Messi were handed red cards in the 37th minute of the match. The video footage showed that Medal was clearly the aggressor and the decision of the referee was challenged by Messi. The Argentine striker, thereafter, walked off the field.

During the medal receiving ceremony, Messi did show up on the field. Earlier in the tournament, Messi criticised the ground conditions for the competition and also questioned refereeing decisions.  Messi was also critical of the referees after the team’s 2-0 loss against Brazil in the semi-final.

“I always tell the truth and I’m honest, that is what keeps me calm…If what I say has repercussions that is not my business. I think that what happened is because of what I said against Brazil,” Messi had said.

‘You fight because you have to, I fight when I want to’ – Floyd Mayweather replies Manny Pacquiao’s call for rematch

R.Kelly has been removed from suicide watch after a face-off with federal authorities in the United States. END_OF_DOCUMENT_TOKEN_TO_BE_REPLACED

A multi-millionaire Russian businessman has been found shot dead at his mansion. END_OF_DOCUMENT_TOKEN_TO_BE_REPLACED

Cheryl, 61, and Quran McCain, 24, who became TikTok sensations by sharing details about their relationship with more than 2.3 million followers on just one account (@Kingqurannewpage), have revealed they are willing to spend up to £120,000 on a surrogate to have a baby together. END_OF_DOCUMENT_TOKEN_TO_BE_REPLACED

The BBC has received six complaints against disgraced DJ Tim Westwood over alleged bullying and sexual misconduct, including a historical one that was referred to the police, despite previously insisting it was unaware of any concerns about the DJ’s behaviour. END_OF_DOCUMENT_TOKEN_TO_BE_REPLACED