High school prodigy, Malcolm Nunana Hehetror simply known as Malcolm Nuna has the whole of Ghana on red alert with anticipation for his first album. The 19-year old has thrilled fans since his burst onto the scene in 2019 when he dropped his first single “Staircase” under the platform of Alkians Entertainment and ignited a frenzy across the Ghanaian music sphere.

Known for his peculiar multi-colored hoodies and expressive personality, Malcolm Nuna has been on various top concerts and stages, and wields versatility as one of his core strengths, as he weaves through Afrobeat, Pop & Hip-Hop flawlessly with mastery and effortlessness which belies his age and experience in the industry. Songs like his debut “Staircase” and subsequent offerings like “Here to Stay” & “Make up Your Mind” served to make 2019 an amazing year for the Accra-born star.

He titles his debut album “Hasta La Vista” which is literally Spanish for “Bye” or “See You Later” but was later popularized by the 1980s movie icon, Terminator. Just like the Terminator, Malcolm Nuna transforms into some sort of lyrical assassin on this album as he teams up with Hotkid, Phronesis, Larusso, Big Chris, Dead Peepol, Fameye, Tulenkey, Kofi Mole, and Yaw Tog on this 17-track beauty. 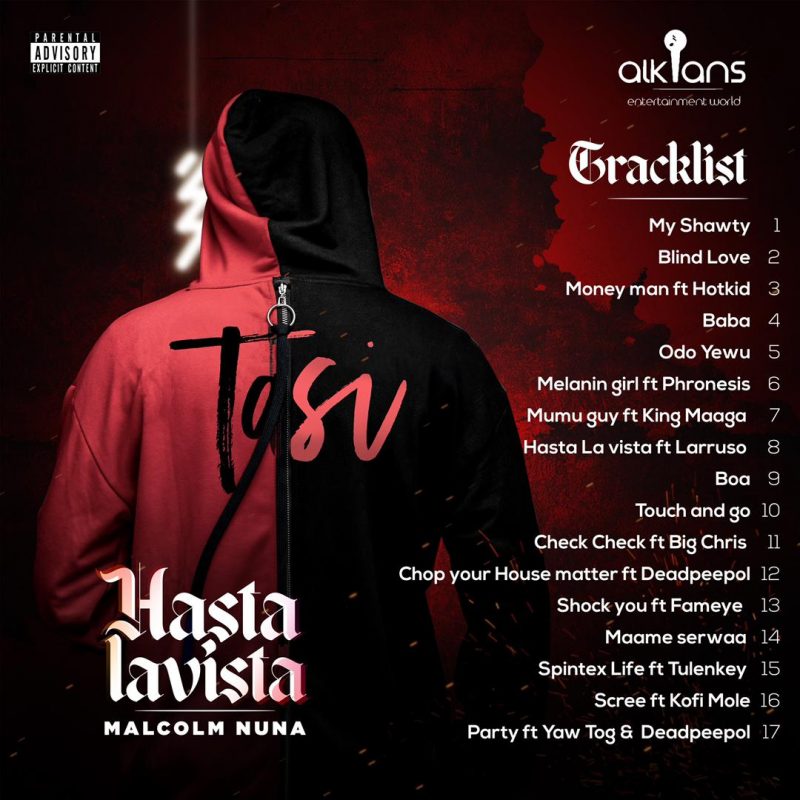 Malcolm Nuna expresses his afro-highlife side on “Odo Yewu”, pays homage to his Spintex upbringing on “Spintex Life” while tapping into some dancehall for “Mumu Guy”. On “Chop Your House Matter”, Malcolm Nuna and Dead Peepol go ham on a sick trap beat further stamping his place as one of the best talents to emerge from the Ghanaian scene in recent times.

The future is bright for Malcolm Nuna, “Hasta La Vista” is the first step and the man from Spintex has laid it all on the line on this one.

Related Topics:Malcolm Nuna
Up Next

Your stay-at-home wives give up their dreams for you, respect them- Nigerian actress Mary Njoku to husbands

Eric Jeshrun graduates with Master of Arts in Ministry

Ghanaian singer Habyba is among the high-profile list of artistes that performed at the Afrika Tage Festival in Austria, Vienna on August 5, 2022. END_OF_DOCUMENT_TOKEN_TO_BE_REPLACED

Hiplife Grandpapa, Reggie Rockstone has reacted to claims by music duo Akatakyie that they are the originators of the Hiplife music genre in Ghana. END_OF_DOCUMENT_TOKEN_TO_BE_REPLACED

Nigerian singer Kizz Daniel has tendered an apology to his Tanzanian fans for failing to appear at a Summer Amplified Show, where he was scheduled to perform. END_OF_DOCUMENT_TOKEN_TO_BE_REPLACED