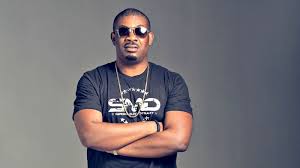 Don Jazzy[/caption] They say it’s never too late to pursue your dreams and father of Nigerian Musician and C.E.O of Mavin Records, Don Jazzy has just proven that to us. “MavinGrandpa” as he is affectionately called just graduated with his first degree in Film and Television production. Don Jazzy, who could not hide his excitement, took to his Instagram to congratulate his dad. He wrote, “Everybody plssss help me congratulate my super dad @MAVINgrandpa as he just got his BA Hons Film and Television production. I am soooooo proud of you dad. 4 years of learning at this age is not beans. But you did it and did it well. You have set an example for me to follow. I might just go back to Uni too. 🤔🙌🏽🙌🏽🙌🏽”. https://www.instagram.com/p/BppMpIVlBq_/ Don Jazzy was also quick to add that he may just follow his dad’s footsteps and go back to school. Well we hope you do soon!]]>

#Pictures: Mr May D gets Married to Swedish Fiancee

From the battlefield to the studio: Ghanaian US-based DJ BIG SAM doing big things in Ohio