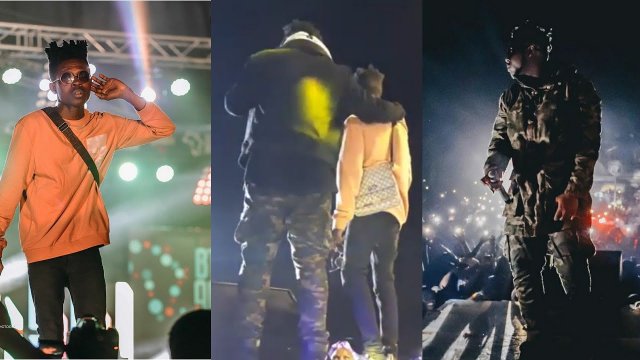 Medikal’s ‘Welcome to Sowutuom’ concert proved to be a welcoming platform for reunions.

After heavily battling with back to back song releases filled with arguably impenetrable lyrics Strongman and Medikal have officially called a truce.

This was after the two rappers were seen performing together at the ‘Welcome to Sowutuom’ concert organized by Medikal.

Strongman surprisingly made an appearance at Medikal’s show to show support.

Medikal, overwhelmed with the support during their performance, called Strongman his brother.

This is the first time the two have performed together since June 2019.

Other reunions that took place was between Medikal and his ex-girlfriend Sister Derby.

Sister Derby to the surprise of many graced the stage to perform their hit song ‘Too Risky’.

Ghanaian Reggae and Dancehall artist, Stonebwoy has been captured in a studio with American singer, Jordin Sparks following their recent meeting in Los Angeles. END_OF_DOCUMENT_TOKEN_TO_BE_REPLACED

A Lagos State High Court, Southwest Nigeria has awarded N5m damages against a singer, Ikuforijimi Abdulrahman, aka Oxlade, over a leaked explicit sex tape with a woman on a social media app, Snapchat. END_OF_DOCUMENT_TOKEN_TO_BE_REPLACED

Ghanaian rapper, Kwaw Kese has recounted his contribution to the success of Stonebwoy’s career. END_OF_DOCUMENT_TOKEN_TO_BE_REPLACED

Ghanaian Afropop and R&b singer, Camidoh has stated that he dropped an EP instead of an album to further solidify his brand some more. END_OF_DOCUMENT_TOKEN_TO_BE_REPLACED

Ghanaian Radio/Television Personality, Deloris Frimpong Manso, popularly known as Delay, has revealed that she has been blocked on Twitter by her colleague Abeiku Santaana. END_OF_DOCUMENT_TOKEN_TO_BE_REPLACED