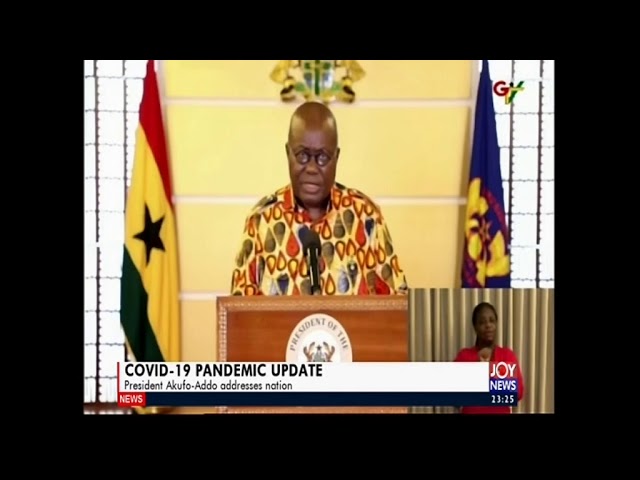 President Nana Akufo-Addo has delivered his fourth national televised address on Friday evening to give updates on government’s preemptive strategy as cases of Covid-19 soars.

The address outlined government moves and strategies to deal with the spread of the dreaded pandemic which has now claimed three lives in the country and more than 20,000 worldwide.

The president announced the establishment of a Covid-19 fund, to be managed by an independent Board of Trustees, and chaired by former Chief Justice, Sophia Akuffo. The fund will receive donations and contributions from the public to assist the welfare of the needy and the vulnerable.

“I have directed the Controller General to pay my next three salaries i.e April, May and June into this fund. Let me also thank from the bottom of my heart, the church, financial institutions and indivudlas who’ve  already made donations to help in this fight,” he said.

Highlights of the address

President Akufo-Addo announced that effective Monday, 30th March, 2020 at 1 am under the Imposition of Restrictions Act, 2020 (Act 1012), there will be restrictions on the movement of persons in the Greater Accra Metropolitan Area (GAMA, which include Awutu Senya East ), and the Greater Kumasi Metropolitan Area and contiguous districts, for a period of two (2) weeks or 14 days subject to review.

2. In Greater Accra, the following areas will be affected:

4. This means that everyone resident in these areas must stay at home for the next two weeks or 14 days, However, if you must go out, it must only be to get essential items such as food, water, medicine, undertake banking transactions, or to use public toilet facilities. But, as much as possible, stay at, h.ome.

6.-Riders of motorbikes are not allowed to carry any additional person, and all intra-city passenger vehicles, such as trotros and taxis, must reduce the number of passengers in order to observe appropriate social distancing and hygiene protocols.

In Akufo-Addo’s last address on Saturday, he announced the closure of all the nation’s borders.

All passengers arriving into the country from midnight of March 22 were also put under mandatory quarantine and screened for the virus.

A later directive was issued for all arrivals from March 12 to be traced and tested for virus.

Since then, pressure has mounted on the Jubilee House to lockdown the country.

Government has, however, been reluctant to do so citing economic concerns.

Related Topics:Nana Addo
Up Next

5 things you need to know about the partial lockdown in Ghana, and how it would affect you

For the 6th time in 2022, Chief One has copped another major nomination! END_OF_DOCUMENT_TOKEN_TO_BE_REPLACED

Nigerian singer Kizz Daniel has been reportedly arrested by the Tanzanian Police for refusing to perform at an event. END_OF_DOCUMENT_TOKEN_TO_BE_REPLACED

Member of Parliament for the Dome-Kwabenya Constituenc, Sarah Adwoa Safe has penned a sweet message to her partner as they celebrate four years of marital bliss.  END_OF_DOCUMENT_TOKEN_TO_BE_REPLACED