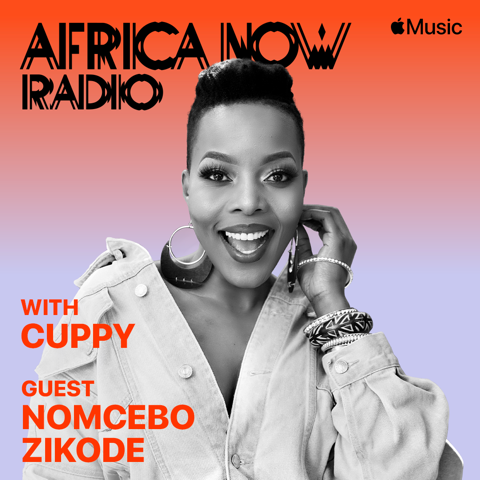 This Week’s Episode Features a Conversation With Nomcebo Zikode, the 5 Hottest Tracks of the Week, and Denola Grey’s Favorite African Proverb!

Tune in to Africa Now Radio With Cuppy This Sunday, October 18th at 2p Lagos/London / 3p Johannesburg/Paris / 6a La / 9a NYC
Only on Apple Music 1

Cover Star Interview
South African vocalist and the voice behind Master KG’s Shazam Global No. 1, Nomcebo Zikode joins Cuppy via FaceTime on Apple Music 1 to talk about her debut album ‘Xola Moya Wam,’ the worldwide success of “Jerusalema,” going Platinum in a month and wanting to work with Beyonce and Davido.

Africa Rising
South African hip-hop artist Costa Titch is this week’s Africa Rising artist, a campaign which shines a light on the next generation of African superstars https://apple.co/32v7zX4

Proverb of the Week
Nigerian actor, content creator and fashion consultant, Denola Grey, shares his favorite African proverb in Yoruba which translates to “you are the company you keep”.

Tune in and listen to the full episode this Sunday, October 18th at 2p Lagos/London / 3p Johannesburg/Paris / 6a LA / 9a NYC only on Apple Music at apple.co/_AfricaNow

Nomcebo Zikode on “Jerusalema” reaching No. 1 on Shazam’s Global Chart

God is amazing. Every time I always say, God can take a nobody and make him a hero or make him a king. Like right now, honestly, I’ve never thought that my voice or the song that is written by me can be all over, like it’s happening with “Jerusalema” because I’ve been asking God that, “God, can you allow me to sing to the world? Can you actually… Not even to the world, to South Africans.” But only what God did for me is not only to sing for South Africans, but to sing to the world because “Jerusalema” is global.

After Jerusalema, I’ve released an album which has nine tracks. The single, “Xola Moya Wami,” on that album, just reach gold in two weeks. In a month, reach platinum.

Nomcebo Zikode on her dream collaborations

It’s a proverb that a friend of mine said, and it’s actually a pretty popular one in that people say in English, but I’m going to say it’s in Yoruba because Yoruba just sounds sweeter.

So this one is “Bi ewe ba pe lara ose a di ose.” So it means “If a leaf spends enough time on soap, it becomes part of the soap itself.” So basically you become the company you keep. And I think that, that is so true, especially now, I’m surrounded by so many amazing people who are standing up to fight for our country.

Related Topics:Nomcebo Zikode
Up Next