A joint meeting in Moscow to prepare for the holding of an international press conference for the Russian Grand Prix for Arab Boxing.

The meeting was chaired by Mr. Al-Hadi Al-Sudairy, Minister Plenipotentiary for Youth and Sports at the Council of the League of Arab States and President of the International Boxing Federation. The Civil Federation, the Mahdi, vice-president of the International Federation, and Dr Hussein Mustafa, head of public relations of the Federation, and Dr Al-Sudairy said in a special statement that the meeting discussed preparations for the press conference for the championship. in the capital, Moscow, from July 27 to August 12, and it was agreed that this conference will be held next week in the Duma’s media center unless there are sudden and unexpected changes or changes.

He said the conference will be held in the presence of many Russian media and foreign correspondents to explain the program of the Russian Grand Prix for Arab Boxing, which will be attended by about 320 international boxers of both sexes and from all over the world.

Dr Al-Sudairy explained that the meeting considered the participation of more than 1000 media professionals from Arab and African countries, and many ministers of youth and sports from Arab and African countries, and that the lists of names were been approved in principle and coordinated with the Russian Foreign Ministry. to grant facilities for this participation.

He said the Russian side welcomed all the heroes, heroines, journalists, ministers and parliamentarians participating in the tournament, which is mainly aimed at Arab and African rapprochement in many areas. 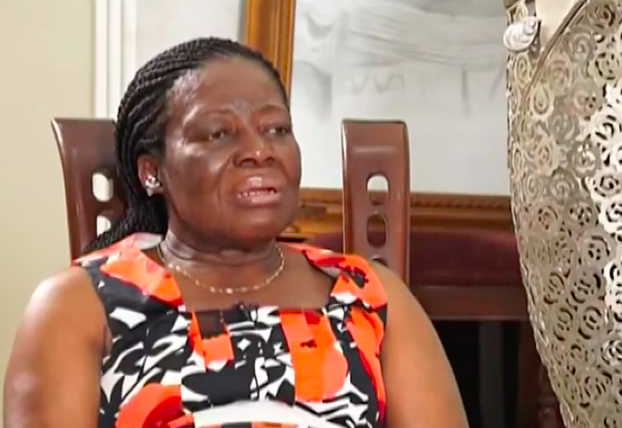 Former MP for Gomoa West and Central Regional Minister, Ama Benyiwa Doe, has passed on, a family source has confirmed to Joy News.

The vociferous politician served as National Democratic Congress MP from 1992 to 2004.

In May this year, she commented on the disagreement between the party involving Bernard Allottey Jacobs.

The former member of the Council of State during late President Atta Mills’ era said the party’s former Regional Chairman recent rants would not affect the party in any way.

“Allotey doesn’t have any influence on the NDC; he only adds up to the numbers,” she told Akoma FM.

She said the suspended member of the party only joined the NDC to enrich himself.

“Allotey Jacobs’ sole interest was to make money [and] now he feels he is okay, so he is biting the hand that fed him,” she said.

She was once a National Women’s Organiser of the NDC. 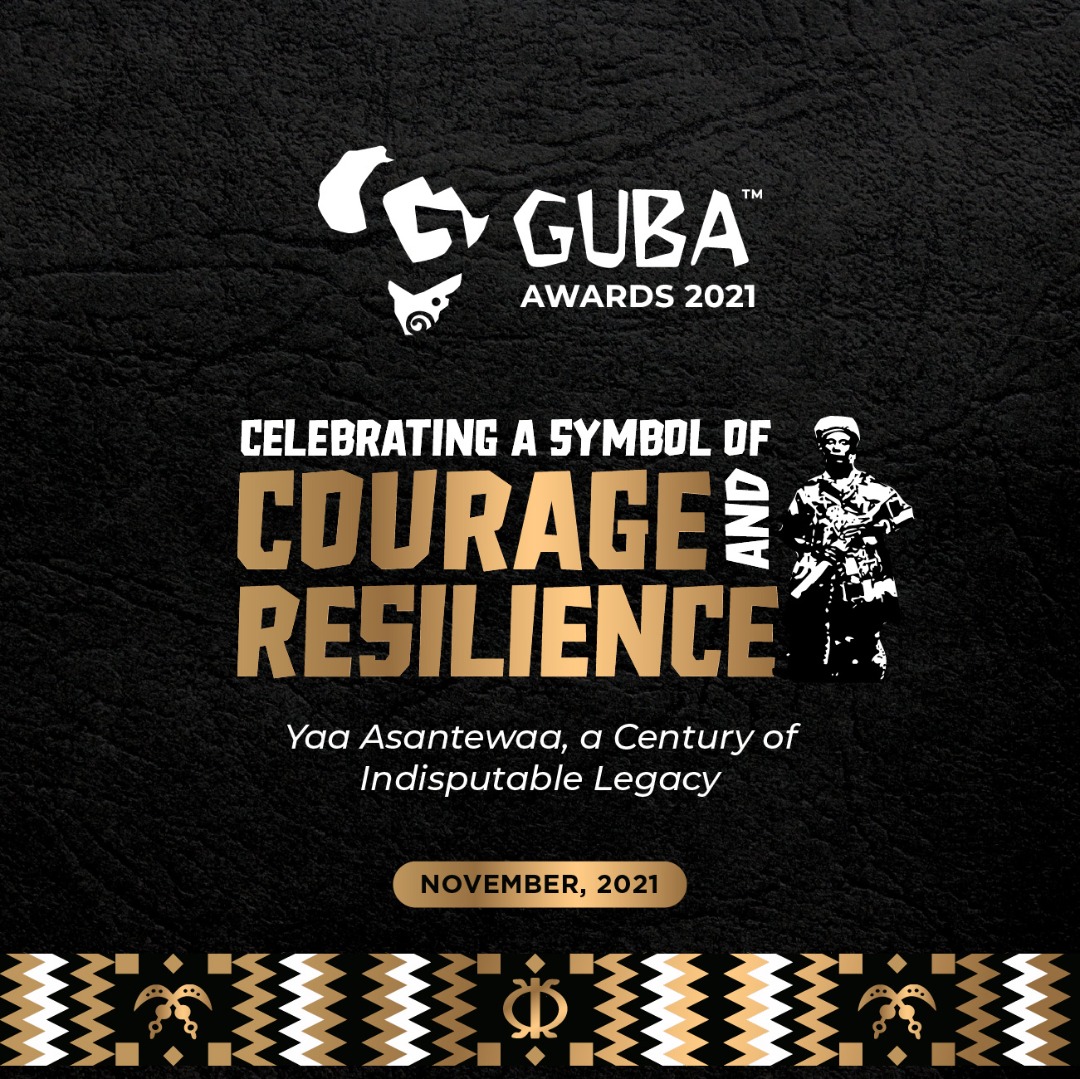 Grow, Unite, Build, Africa (GUBA) will dedicate its 2021 Awards to the celebration of a century of the passage of Yaa Asantewaa, the influential warrior and Queen mother of Ejisu, who rose to lead an Asante army against the invading British. This event will be in Accra, a first in Ghana.

This year’s Awards, is a celebration of an important moment in African history, one that is unique to the relations between the Republic of Ghana and the Republic of Seychelles and also to celebrate the resilience of the African woman. The theme for GUBA Awards 2021 is “Celebrating a Symbol of Courage and Resilience.”

The Awards, which will be held on Monday, November 8, 2021, in Accra, is expected to host several high-profile personalities in Ghana and from the diaspora. The plethora of dignitaries and personalities expected to grace this year’s Awards, reflects the shift from an event celebrating the Ghanaian diaspora to a truly Pan-African occasion.

“More importantly, the event will also mark the centenary of the death of Yaa Asantewaa, an Asante Queen Mother and the last African woman to lead a major war against the then colonial powers. Yaa Asantewaa is honoured across Africa and the African diaspora for her resistance to then British imperialism and she is widely considered as a symbol of courage, strength, and resilience. She was a critical figure in recognizing and using the power of women to mobilize both men and women to resist colonial power.” GUBA Enterprise’s President and CEO, Dentaa Amoateng MBE, indicated.

Dentaa noted, “GUBA awardees are the modern day representation of Yaa Asantewaa; at the time the world was faced with an unprecedented pandemic, they took up the mantle of leadership, and with courage and resilience, helped to steer the world back onto the path of progress”.

While celebrating the contribution of Black women, the GUBA Awards 2021 will also raise awareness on maternal mortality and call for measures to ensure safe child delivery across the continent. GUBA Enterprise believes that every child, born and unborn, has great potential and must be given the opportunity to fulfill this potential.

GUBA Enterprise seeks to promote greater economic, social and cultural cooperation between Africa and the African diaspora through harnessing the power of the African youth to advance the socio-economic interests of the continent. 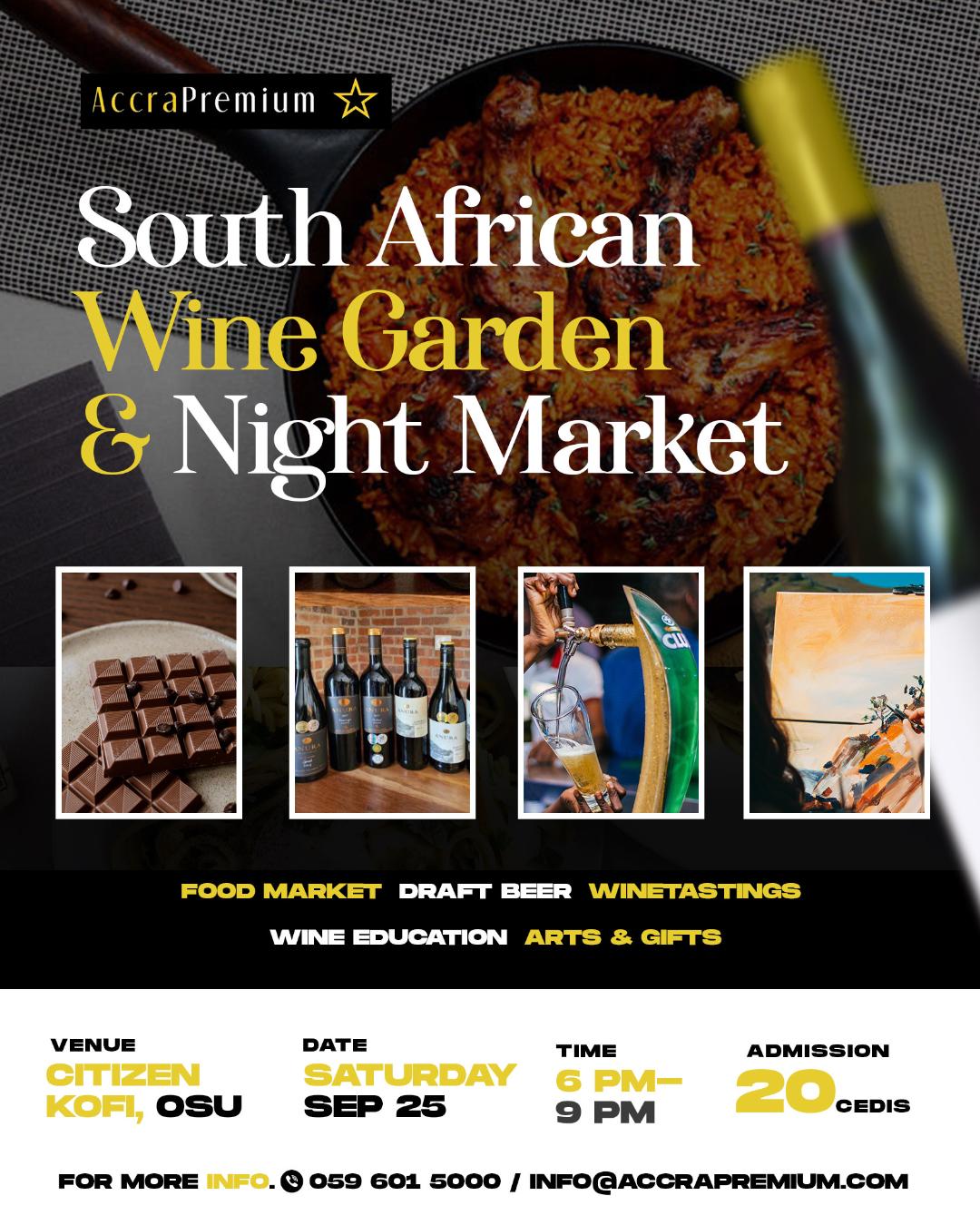 WESGRO, Capetown and Western Cape Tourism, Trade and Investment and AccraPremium are hosting a special weekend of activities for Ghana’s Food & Wine Lovers. Experience exquisite varietals from 10 top South African Wineries at next Weekend’s AccraPremium Market.
Meet the Makers of the following Wines, Niuba, Riebeek Valley, Clos Malverne, La Ricmal and Nice, in person. The Makers of Gun Bay, Holden Manz, Thokozani, African Roots Wine and Anura will be with us virtually. There will be wine sampling and education on both days of the AccraPremium Market.
The AccraPremium Market will be hosted at Citizen Kofi Entertainment Center in Osu over 2 days. A Wine Tasting Night Market on Saturday September 25 from 6-9pm and a Sunday Afternoon Food Market from 11a-6p. Admission is GHS20 per person.
Over 25 Vendors will be showcasing a delicious variety of Food, Drinks, Wine, Beer, Desserts, Fashion, Art and more.
All COVID precautions will be enforced, with temperature checks, hand sanitization, mask requirements and crowd size carefully managed.
For information contact info@accrapremium.com
AccraPremium
www.AccraPremium.com
Tel:  059 601 5000
Accra Food Festival 2019 Video CLICK HERE
Continue Reading 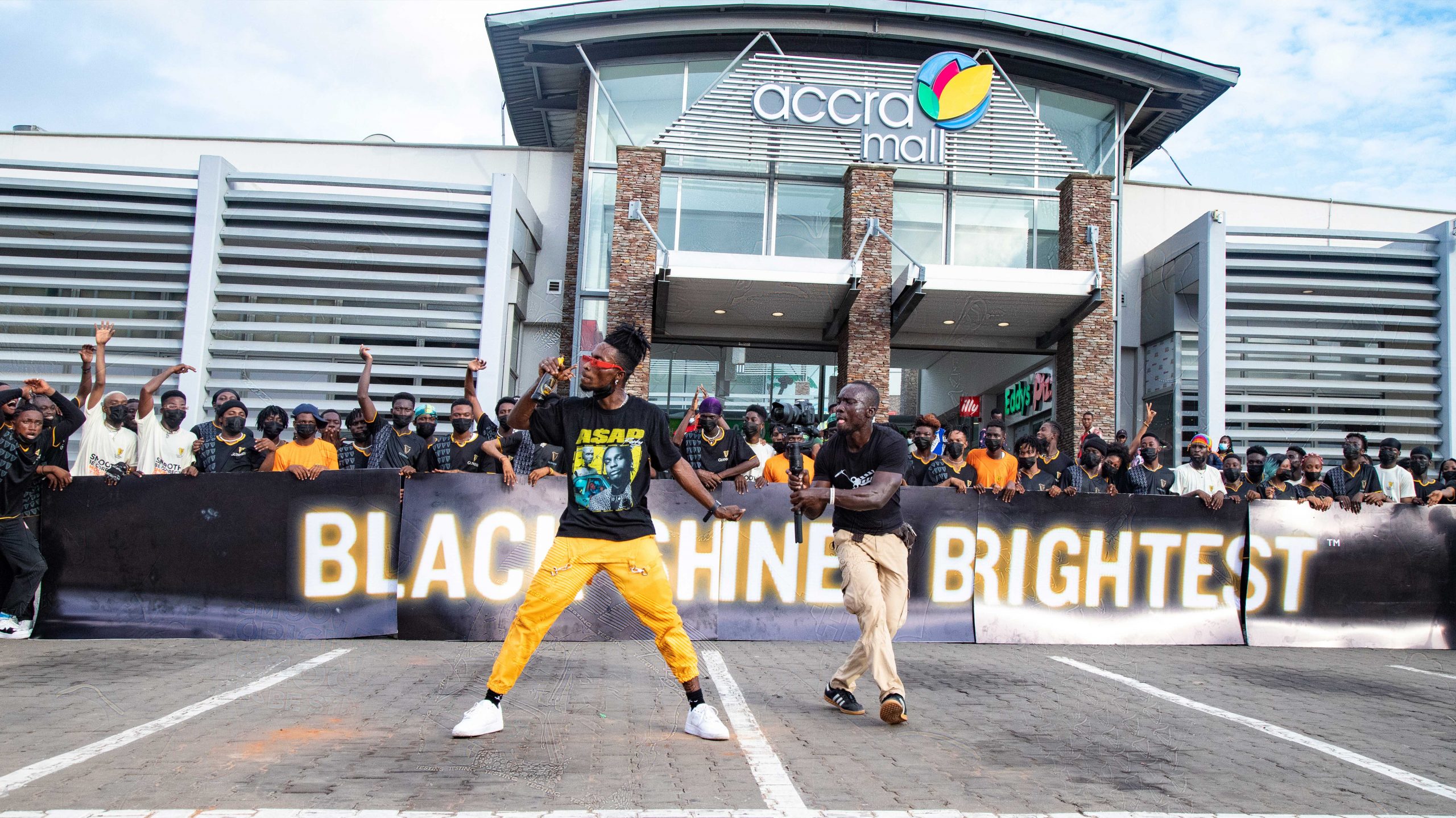 In between the daily deluge of late afternoon stress, shoppers, workers, and passersby at the Accra Mall were entertained to an energetic flash mob performance led by none other than Ghana’s dancing sensation, Incredible Zigi.

The flash mob which generated waves and trended on social media is an ode to Guinness Ghana’s Black Shines Brightest Campaign and a means to call on Ghanaians to join the new and exciting wave of up-and-coming cultural change makers within Ghana and Africa at large.

Onlookers could not hide their amazement and excitement as many who were present pulled out their phone cameras to record a moment that would never come back but only be etched in their minds as one of the most memorable.

‘Black Shines Brightest’ is a new Pan African campaign celebrating the iconic black liquid enjoyed all over the continent for over a century.

Throughout the campaign, Guinness is working with real culture makers from across the continent who demonstrate how Black Shines Brightest in a range of different ways.

These individuals will create moments, events, and content to be enjoyed by everyone and as the Ghanaian brand influencer, Incredible Zigi has proved that he is indeed a real culture maker through his recently gone viral dance challenge and storming Accra Mall with arguably the most energetic flash mob performance ever seen in Accra. Ghanaian Highlife sensation Akwaboah has declared that his fans should not be surprised if he releases a video for every song on the Lighthouse album.

According to the Akwaboah, all the songs on the Lighthouse album are so good that each deserves to be appreciated as a standalone work of art.

A video for the first single Ensesa has already been released to extremely positive reviews on YouTube. Akwaboah is also scheduled to release the second singe ‘Ntro Naa’ exclusively to boomplay on 24th September 2021.

‘I see lighthouse as a rebirth for me as a musician. I am therefore searching very deep within to bring out songs that will be timeless.’

Akwaboah who counts to his credit song writing and production of Sarkodie’s critically acclaimed ‘Mary’ album, is set to collaborate with Strongman, Sarkodie, Cina Soul, Efya and Adina on the Lighthouse Album.

It remains to be seen whether he will indeed carry out the promise of releasing a video for every song on the album. 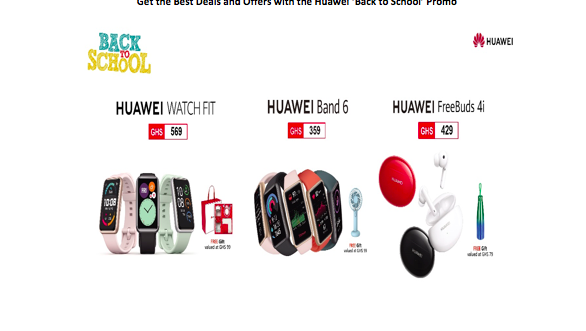 School Season is here again! Huawei is giving you amazing offers when you buy any of these Huawei wearables as you go back to school .Buy a Band 6, Freebuds 4i or a Watch Fit and enjoy instant gifts ranging from Mini Portable fans, Stainless Steel Bottles and Gift Boxes.

Buy Band 6 and Get a mini portable fan

Keeping track of your heart rate is one of the best things you can do for your fitness and health as you go back to school. The TruSeen™ 4.0 heart rate monitoring technology on the Huawei Band 6 uses an optical lens and AI-based data processing to accurately monitor your heart rate 24 hours a day. Be alerted instantly when your heart rate drops below or rises above safe levels. With just GHS 359 you can still maintain a healthy lifestyle on a budget with Huawei Band 6.

Buy  Freebuds 4i and Get a stainless steel bottle

Studying is very vital in achieving your academic goals. However, this can be interrupted by outside factors from friends chatting to loud music playing. With Huawei Freebuds 4i active noise cancellation feature, you can join in your online lectures without being overly bothered with outside distractions. The sensors in HUAWEI FreeBuds 4i actively detect and reduce ambient noise. HUAWEI FreeBuds 4i also has remarkable endurance. It can play music for 10 hours continuously on a full charge and also gives you 4 hours’ audio enjoyment from a 10-minute charge – perfect when you’re in a hurry. For only GHS 429 you can grab yourself a Freebuds 4i.

Buy Huawei Watch Fit and get a gift box

School sometimes can be stressful from all that hard work of learning and completing assignments. HUAWEI TruRelax™ technology and all-day stress tracking algorithm can effectively monitor your stress levels to see if you are feeling tense. Try to follow the suggested guided breathing exercises to release your stress when you are stressed out. HUAWEI WATCH FIT is also the perfect smartwatch that blends technology with fashion.  With just GHS 569 you can match your fashion style whilst keeping fit with this smart watch.