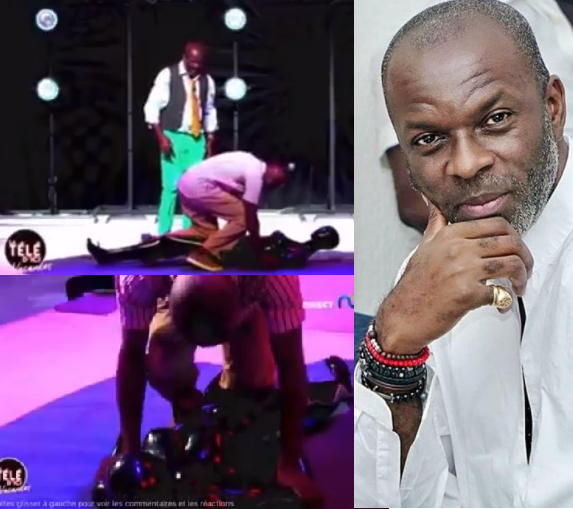 A television presenter in Ivory Coast was suspended on Tuesday for 30 days after he invited a convicted rapist onto his prime-time show and asked him to simulate a rape using a mannequin.

The Nouvelle Chaine Ivoirienne private television station apologized for airing it and canceled the final episode of this particular show, which had been scheduled for Friday.
“I’m sincerely sorry to have shocked everyone while trying to raise awareness,” de Mbella wrote on Facebook. “I made an error.”

“I’m also sorry for everything that was said or done during that sequence of the program yesterday that hurt,” he wrote. “I beg for forgiveness from all victims of rape.”

In the segment, broadcast on Monday, de Mbella asked his guest to demonstrate how he raped women using a female mannequin.

At one point, de Mbella helped the guest adjust the mannequin and asked him how he chose his victims, whether he preferred them “slim or fat” and whether the victims “enjoyed it.”

The segment was swiftly condemned on social media platforms in Ivory Coast and across West and Central Africa.
Telecoms operator MTN, the sponsor of the Miss Ivory Coast pageant that de Mbella is scheduled to host on September 4, said in a statement it would take firm measures in response to the segment but did not say whether de Mbella would still host.

Ghanaian actress, Bisa Gbekle has revealed that it’s not all rosy when going under the knife to get your body enhanced. END_OF_DOCUMENT_TOKEN_TO_BE_REPLACED

Ghanaian actress, Bisa Gbekle became the talk of town over the past few weeks after she flew all the way to Turkey to undergo body enhancing surgery. END_OF_DOCUMENT_TOKEN_TO_BE_REPLACED

Ghanaian actress, Bisa Gbekle became the talk of town over the past few weeks after she flew all the way to Turkey to undergo body enhancing surgery. END_OF_DOCUMENT_TOKEN_TO_BE_REPLACED

Ghanaian actress, Yvonne Nelson, has come to the defence of veteran actor, Psalm Ajetefio (TT), over his “plead for leftovers” scandal that has hit the country over the past couple of days. END_OF_DOCUMENT_TOKEN_TO_BE_REPLACED

Despite public opinion that actress Yvonne Nelson has gone silent on the current ruling party, the New Patriotic Party (NPP), she begs to differ. END_OF_DOCUMENT_TOKEN_TO_BE_REPLACED