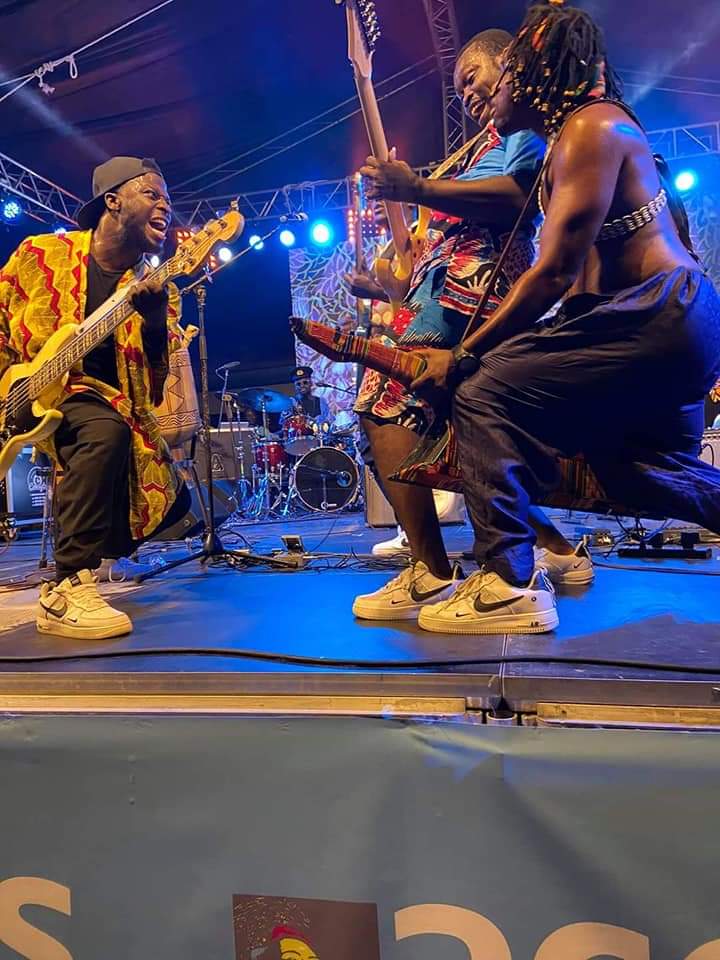 After topping World Music Charts Europe in 2020 and chalking other great successes, the video of Santrofi’s ‘Alewa’ is out.

Songlines Magazine and French-based major music digital distributor, Pan African Music, have already declared Santrofi’s album as one of the Best Albums of 2020.

Since its release a few weeks ago, the music video directed by Salifu Abdul Hafiz continues to receive praise from fans and critics.
The video is quintessential Santrofi, featuring an envelope-pushing wardrobe, a colourful cultural setting (iconic Aburi Gardens), and a few gritty scenes.

The video emphasises vibrant dance and choreography, featuring an eclectic mixture of Black and White dancers.
In the empowering video, Santrofi is clad in custom couture looks. The production concept, scenery, costume, lighting, and sound rhyme very well with the silky lyrics of the song.

The lyrics chronicle the biggest cultural happenings globally – racial segregation and discrimination.
The music video captures a white young man and an African young man dancing to the ‘Alewa’ song and exchanging infectious pleasantries, in a moving bus.
As the bus journeys to its destination, it is stopped along the police check-points by a white policewoman for signs of defective equipment, expired vehicle license, and road worthiness.

The policewoman without finding faults greets the singer and dances heartily to the song, gets down, and bids the passengers a safe journey.

Santrofi takes viewers beyond the LED screen to explore a contentious theory that continues to puzzle the world – racism. The reactions of Blackman and the Whites are directly opposite to the famous moments in modern American civil rights history – when Rosa Parks (a 42-year-old Black seamstress) in 1955 boarded a segregated bus to return home after a long day of work and refused to give up her seat to the White man; leading to her arrest and conviction.

Incidentally, the song released in 2020 was during the period of global shutdown – COVID-19. And as there were attempts to find a vaccine, a racist professor, Jean-Paul Mira, shamefully said: “shouldn’t we do this study in Africa where there are no masks, no treatment, no resuscitation?”

The lyrics of the song, therefore, preach love and unity as there is no difference between ‘Black’ and ‘White’. The Whites can “dance” so as the Blacks; Blacks can also “walk” so as the Whites, which metaphorically means Alewa, a popular black-and-white boiled sweet.

Currently, Santrofi is rocking the stages of major music festivals and concerts in many European countries.

Watch the official music video for Santrofi’s ‘Alewa’ on YouTube:

Actor-turned-musician, Frank Naro’s latest single, “I Like It” sees him experimenting with the trending ‘Amapiano’ music phenomenon. END_OF_DOCUMENT_TOKEN_TO_BE_REPLACED

Mista Myles is in with his first release of the year today, ‘Toxic Love’ – a song about what would easily pass as an intense night in the Sin City, Vegas. Stream or download ‘Toxic Love’ across all major digital platforms here: https://ffm.to/6vr4ra9 END_OF_DOCUMENT_TOKEN_TO_BE_REPLACED