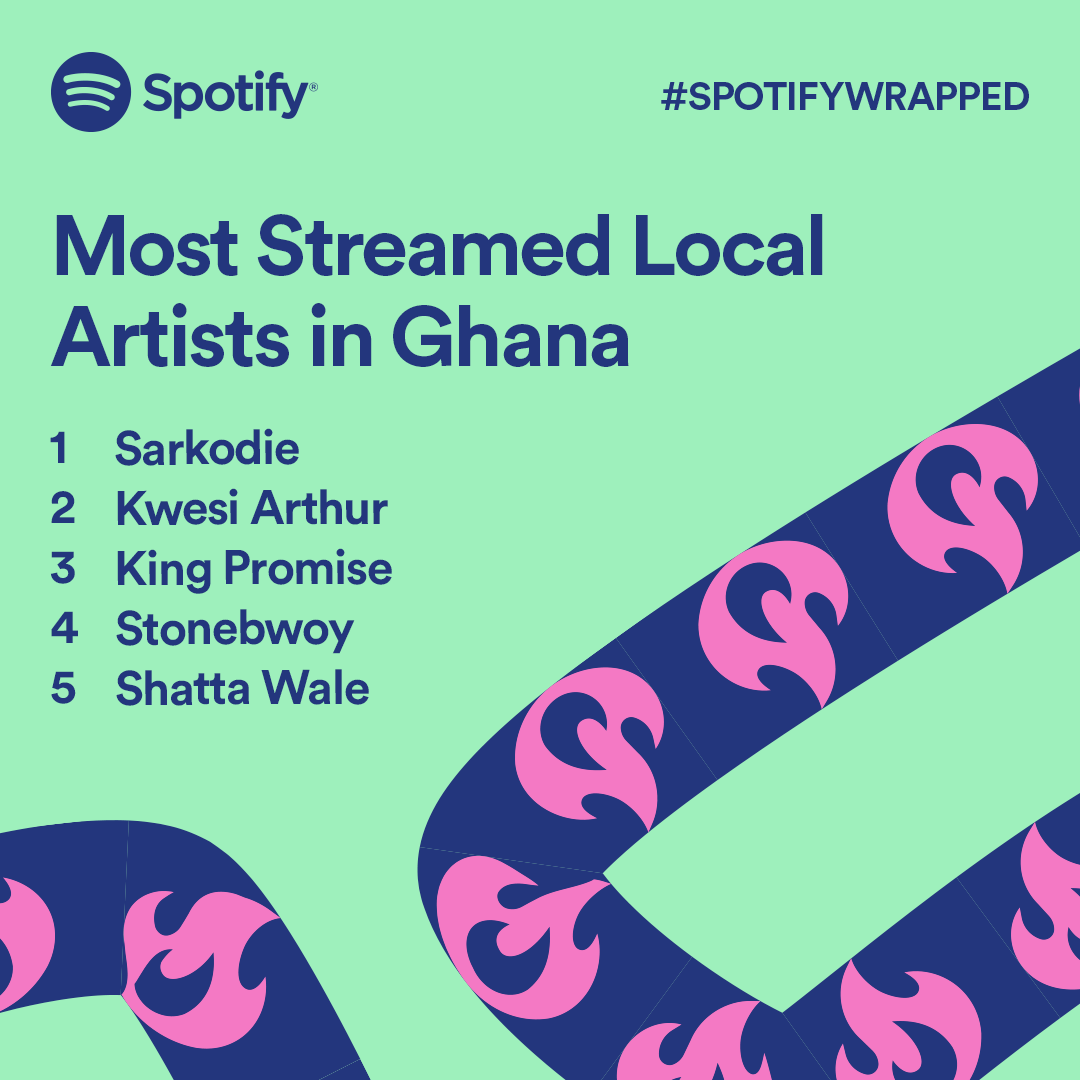 As Spotify’s Wrapped data for Ghana came out in the first week of December, two artists are drawing special interest –  one for the pole position he claimed on Wrapped, the other for Wrapped’s overnight positive effect on her fan base.

Rapper Sarkodie (also known as King Sark) claimed top artist of the year (with just two other Ghanaians in the shape of Kwesi Arthur and King Promise in the top 10), and took the top album spot for No Pressure, a 16-track album that represents a return to a more pure style of hip-hop for the acclaimed artist.

Sarkodie is not only one of the most awarded artists in Ghana, but also on the African continent, having received 107 awards from 191 nominations – including 25 Ghana Music Awards – over the past decade.

Less established, but trending ever upwards, is Ghanaian-American sensation Amaarae, in whom Ghanian music may have found the gem it’s been looking for to propel the country onto the global stage.

Ama Serwah Genfi, professionally known as Amaarae, has almost 230,000 combined followers across Instagram and Twitter, and these numbers are set to explode as the 27-year-old star shoots for the moon. With her track “Sad Girlz Luv Money Remix” featuring Kali Uchis and Moliy amassing over 70 million Spotify streams as of today — 20 million more since breaking the 50 million milestone mark in late November — “The Angel You Don’t Know” album-maker is fast becoming the Ghanaian musician the world knows.

On the local scene, the New York-born performer was nowhere to be found in Spotify’s Ghana Top 10 Most  Female Artists. It was Gyakie who stood as the sole Ghana flagbearer in second position, behind Tems and ahead of Nicky Minaj, Doja Cat, Adele, Rihanna, Teni, Beyoncé, Tiwa Savage, Ariana Grande.

However, Amaarae has only started building steam locally and her almost-whispering vocal style may soon resound loudly on speakers across Ghana’s most vibrant areas and in the ears of the country’s Spotify users.

Her incredible rise on mega audio streaming platform Spotify is expanding into the realms of social media thanks to her army of fans. Celebrating Wrapped 2021 on December 1st, Amaarae tweeted:

“All the fountain babies worldwide. My sad girlz & sad boyz. Thank you all so much for streaming TAYDK so crazy. The love & support I receive from you all is second to none & I love u so much. Let’s make another classic next year & shake the world. Iove 4ever.”

On the launch of Spotify Wrapped 2021, Amaarae had 11.9 million monthly listeners. She has racked up over a million more and counting, since then.

Returning to Sarkodie, No Pressure’s popularity doesn’t appear to have come off the back of a host of bankable singles. Only “Coachella” (feat. Kwesi Arthur) is among the top 10 tracks for Ghana this year. Its position, at seventh, is four below the most-streamed single by a Ghanaian artist in 2021, in the shape of King Promise’ “Slowdown”. This suggests that the album’s success lies in what it presents as a coherent whole, rather than as a series of tracks.

Ultimately then, it’s yet further proof that albums still have a significant role to play on streaming platforms. The fact that Sarkodie is one of Ghana’s most decorated artists only underlines how important a great album can be and that if you have something worth saying (or rapping as the case may be), people will listen.

Ghanaian actress, Yvonne Nelson, has come to the defence of veteran actor, Psalm Ajetefio (TT), over his “plead for leftovers” scandal that has hit the country over the past couple of days. END_OF_DOCUMENT_TOKEN_TO_BE_REPLACED

Despite public opinion that actress Yvonne Nelson has gone silent on the current ruling party, the New Patriotic Party (NPP), she begs to differ. END_OF_DOCUMENT_TOKEN_TO_BE_REPLACED

Caring Volunteers Network (CAVNET), INC, a Ghanaian based Non-Governmental Organization has received approval as a tax-exempt organization under the Internal Revenue Code (IRC) section 501 ( c ) (3) of the United States. END_OF_DOCUMENT_TOKEN_TO_BE_REPLACED