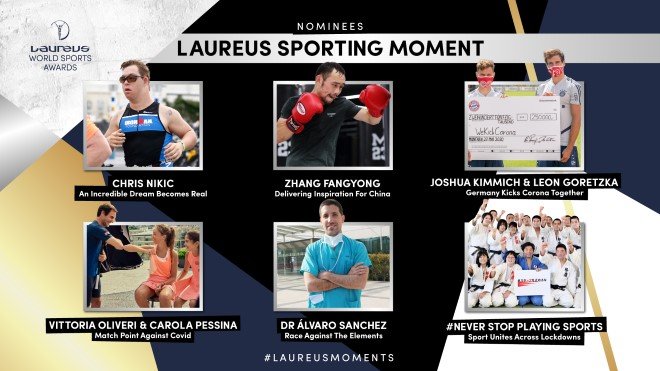 Sports fans around the world can be part of next month’s Laureus World Sports Awards by voting in a global online poll to pick the Laureus Sporting Moment of the Year. Voting opens today!

Recent winners have included the FC Barcelona Under 12 team (2017), who consoled their losing Japanese opponents after the final of the World Challenge Cup, the Brazilian Chapecoense side (2018), who returned to football after the disastrous air crash which wiped out almost all the team, and Chinese double amputee Xia Boyu (2019) who reached the summit of Mt Everest.

Each of this year’s shortlisted moments, below, symbolises the true value of sport and brings to life the message that sport has the power to change the world and can unite us all.

Zhang Fangyong has never given up his dream of becoming a boxer, no matter what the obstacles. Now he works as a delivery man to support his family and to allow him to afford to train. In China delivery men have made a great contribution to normal life during Covid-19, and his determination has made him a national sporting hero.

Bayern Munich players Joshua Kimmich and Leon Goretzka set up the ‘We Kick Corona’ initiative to support charities, groups and organisations, who have struggled during the coronavirus pandemic.  So far it has raised more than €5 million.

An improbable tennis match between two young girls staged on the rooftops of Finale Ligure in Italy showed that not even Covid-19 lockdown rules could stop their spirit of friendship and love of sport. Their reward was an unexpected visit by Roger Federer.

RACE AGAINST THE ELEMENTS

When Storm Filomena brought the heaviest snowfall in decades to Spain, everything stopped. But Dr Álvaro Sanchez was typical of the resolute spirit of health care workers, walking 17km (10.5 miles) to reach his Covid-19 patients in hospital.

When sport was cancelled in Japan because of Covid-19, many high school boys and girls lost the chance to showcase their performances for applications to universities and sports teams. #NeverStopPlayingSports, founded by two rugby internationals, has filled the gap.

To view these emotional and inspirational clips and to VOTE for your favourite, visit www.laureus.com/sporting-moments. Voting is open until MAY 6, when the winner will be announced in the Laureus Awards Show in Seville.

Sean Fitzpatrick, Chairman of the Laureus World Sports Academy, said: “In the last five years this Award has given us a new impetus. Firstly it has involved the sports fans of the world who can now have their own voice and pick their own Award winner. But also, it has moved away from the scoreboard or the winner’s rostrum and celebrates something very special in sport, something very special in life.”

Founded in 2000 as the Laureus World Sports Awards, Laureus has now also become one of the most influential and active sports-driven social enterprises through its charitable arm, Laureus Sport for Good.

Since its inception Laureus has helped to improve the lives of more than six million children and young adults, and now supports more than 250 sports-based community programmes around the world, fulfilling the visionary words of its First Patron Nelson Mandela – ‘Sport has the power to change the world’.