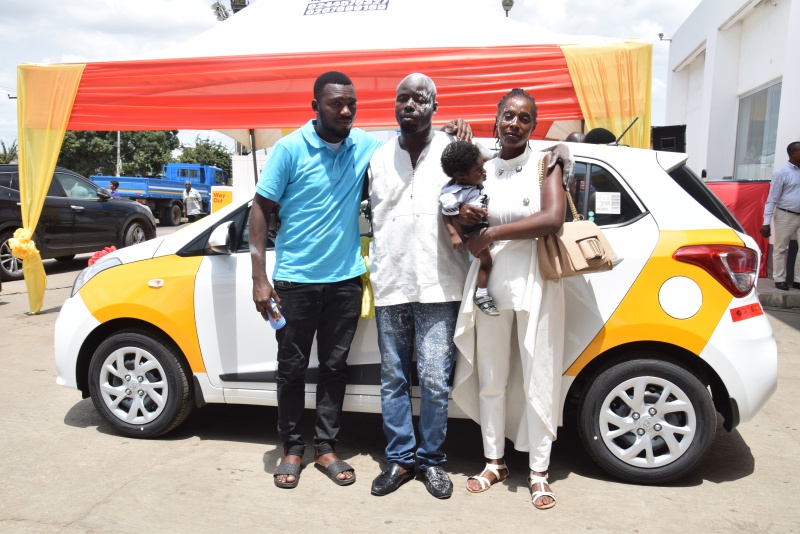 An Awoshie-Pokuasi bound taxi driver, Samuel Agbesi, is the lucky winner of a brand new Hyundai Grand i10 taxi in the first mini draw of the ongoing Shell Filling No Y3 Deep Taxi Bonanza. The draw, which was supervised by the National Lottery Authority (NLA), also saw Benedict Agyemang, a trotro driver based in Asanti Bekwai and William Segbefia, a pastor winning one year and six months’ free fuel respectively. About 293 motorists also won other amazing prizes including one month’s free fuel, lubricants and shopping vouchers. Vivo Energy Ghana, the company that markets and distributes Shell branded products, is giving away six brand new Hyundai Grand i10 taxis for customers who buy at least GH₵60 worth of fuel at any Shell service station nationwide. Customers also stand a chance of winning about 75,000 prizes during the three month promotion. Receiving the prize, Samuel Agbesi could not hide his emotions as he talked about his ordeal and frustrations with his current taxi which is faulty and currently parked at a mechanic shop. Having won a star prize through the promotion, he urged his colleague taxi drivers and other motorists to fully get involved. “I never believed this could happen to me! When I got the call, I thought it was one of those fraudsters until it dawned on me that the call was real after series of questions and engagement with the official. I don’t know anyone from Shell, no one knows me there until today. I am grateful to God and my family for their support. Today, I am a car owner.” said Samuel Agbesi. The Retail Manager of Vivo Energy Ghana, Mr. Kwame Ackah, who presented the taxi to the winner reassured customers of the company’s commitment to rewarding their loyalty to the Shell brand. “You have been part of our growth and success story and this promotion is to say thank you for your loyalty. We want to encourage all motorists to buy from Shell service stations nationwide to stand a chance of winning big in the promotion. This is just the beginning. There are five more taxis to be won and I encourage you to start your entry now,” he said. The ‘Shell Filling No Y3 Deep Taxi Bonanza’ is being run in partnership with the National Lotteries Authority (NLA) on the Caritas platform and Hyundai World by Hyundai Motors & Investments Ghana Limited. https://ameyawdebrah.com/shop-n-save-launches-promo-mark-one-year-anniversary-adenta-branch/]]>