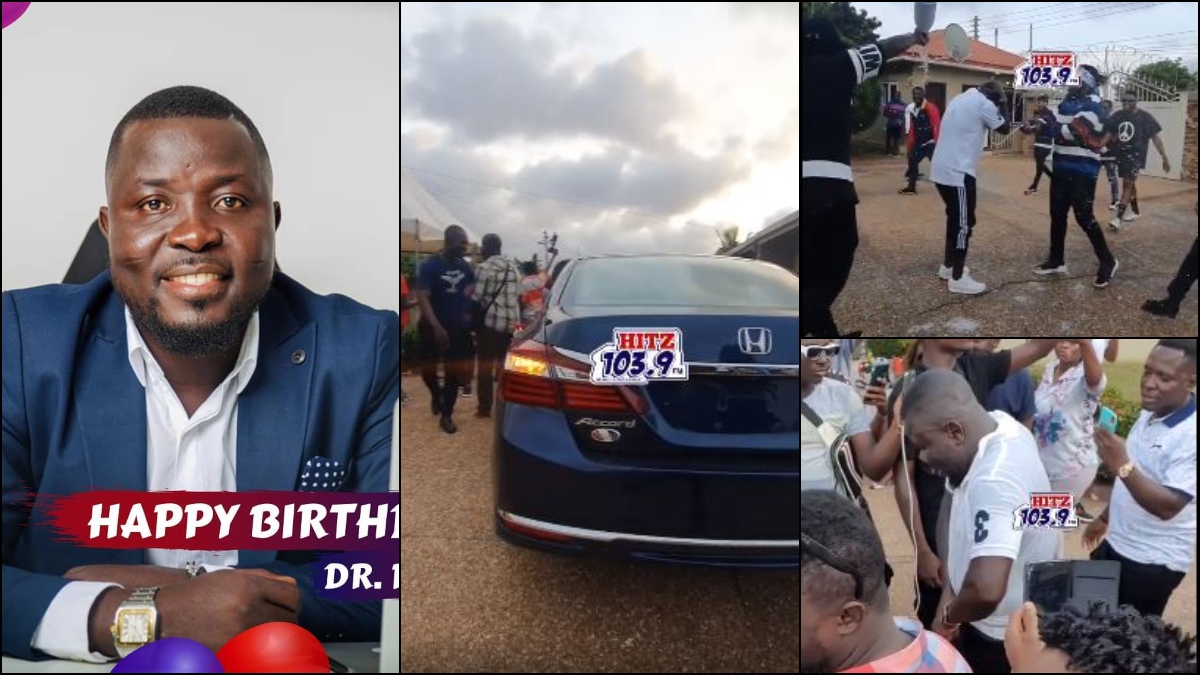 Hitz FM’s presenter, Dr Pounds got a big surprise on his birthday after his friends bought him a brand-new Honda Accord car to celebrate his new age. Born Maximous Addae Mensah, Dr Pounds turned a year older yesterday and organized a birthday party to celebrate. The party was a star-studded one as Asamoah Gyan, Kuami Eugene, Kyrimi, Dope Nation, Andy Dosty, Coded of 4×4, Stephen Appiah among others were in attendance.

The media personality was utterly surprised when the MC, actor Prince David Osei, revealed the car was given to him by his friends.

One of the friends, who had the opportunity to explain why he was being gifted the vehicle, said Dr Pounds has been like a family to them.

“Pounds has been a brother and we think he deserves the best so we thought to come together and surprise him” he said.

Dr Pounds started radio in 2003 at Cape Coast based Eagle 87.7 FM where he hosted the drive time program with Kwabena Marfo. He also hosted a Rap show at the same station and he won the best DJ in the Central region in 2007.

Men deserve to be spoiled too- Efia Odo to the ladies

Ghanaian actress, Yvonne Nelson, has come to the defence of veteran actor, Psalm Ajetefio (TT), over his “plead for leftovers” scandal that has hit the country over the past couple of days. END_OF_DOCUMENT_TOKEN_TO_BE_REPLACED

Despite public opinion that actress Yvonne Nelson has gone silent on the current ruling party, the New Patriotic Party (NPP), she begs to differ. END_OF_DOCUMENT_TOKEN_TO_BE_REPLACED

Caring Volunteers Network (CAVNET), INC, a Ghanaian based Non-Governmental Organization has received approval as a tax-exempt organization under the Internal Revenue Code (IRC) section 501 ( c ) (3) of the United States. END_OF_DOCUMENT_TOKEN_TO_BE_REPLACED