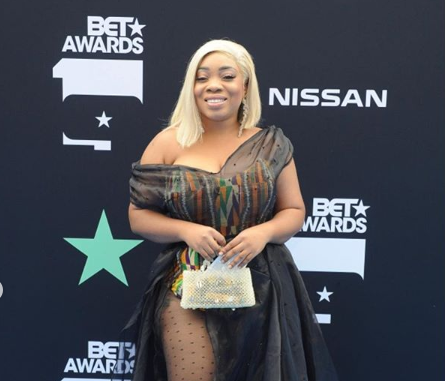 Ghanaian actress, Moesha Bodoung has made shocking revelations about Sandra Ankobiah in a bizarre apology on Instagram.

The now born again actress, in an apology to Sandra on a post on Instagram, made shocking revelations about her relationship with the popular Lawyer.

According to Moesha, she helped spread rumours about Sandra in the past, however, she did so because it was a “thing” in their industry.

“Sandra I’m very sorry for telling people that you had a boyfriend that was in jail for drugs and I also heard it from people and I never said it to make you look bad ,everyone talks about everyone in our industry and I know you’ve also spoken about me and laughed at my fake designers,” she wrote.

Moesha continued stating that she knows Sandra has forgiven her while revealing a prophecy on Sandra’s future.

“I know you love me because God brought you into my life and you will marry my uncle and you two will love each other and No one will ever cheat on their partners and I will pray for God to protect your marriage and God will provide for you and my uncle. You will go back to being a lawyer and you will defend prisoners and I will take people out of jail by the help of God Almighty, ” Moesha revealed.

Moesha however, concluded her apology with a shocking revelation about her past life with Sandra.

“… I will help many prostitutes to find a job and they will love us because we both date men for money and I will defend you because you are my in-law,” she concluded. Ghanaian rapper, Kwaw Kese has reacted to the trending purported copy of a will of Kwadwo Owusu Afriyie, popularly known as Sir John. END_OF_DOCUMENT_TOKEN_TO_BE_REPLACED

Nigerian actress, Eucharia Anunobi, has revealed she urgently needs a man to settle down with. END_OF_DOCUMENT_TOKEN_TO_BE_REPLACED

General Manager of GhOne TV, Nana Aba Anamoah and Broadcaster, Serwaa Amihere have chided supporters of the New Patriotic Party (NPP) for defending the purported copy of a will of Kwadwo Owusu Afriyie, popularly known as Sir John. END_OF_DOCUMENT_TOKEN_TO_BE_REPLACED

Kourtney Kardashian and Travis Barker have got married – again. END_OF_DOCUMENT_TOKEN_TO_BE_REPLACED