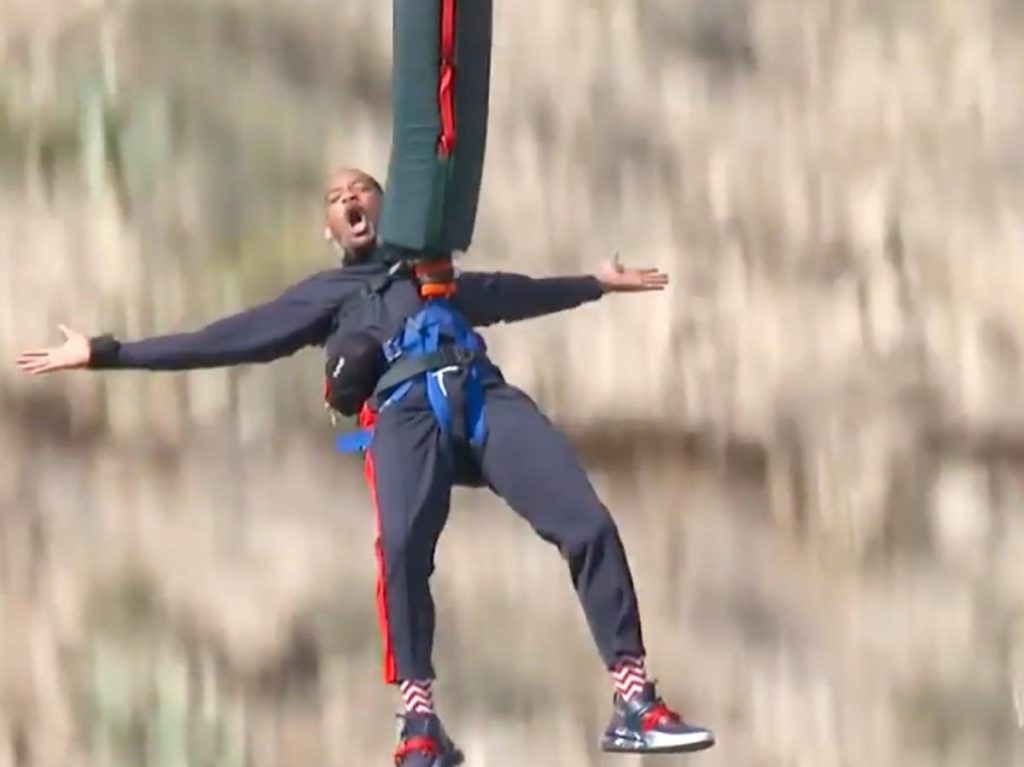 Will Smith bungee jumping[/caption] Will Smith has celebrated turning 50 in style. Bungee jumping probably isn’t everyone’s cup of tea, but at least he won’t forget his big day in a hurry. And this wasn’t a standard bungee jump, the star decided to do it out of a helicopter over the Grand Canyon, watched by his family and friends. Will shared the moment on his YouTube channel and once he’d made the jump but was still dangling he said: “It goes from pure terror to pure bliss.” The video is called Will Smith: The Jump. A warning, there’s some language in the video that you might find offensive. https://www.youtube.com/watch?v=ay_kwpgXpcQ Just before the jump he seemed a little nervous, but he soon got into it and blew kisses to the crowd. His wife Jada Pinkett Smith and his three kids Trey, Jaden and Willow were watching, along with his friend Alfonso Ribeiro, who played Carlton in The Fresh Prince of Bel-Air. Doing a bungee while attached to a helicopter added an extra element of danger because the helicopter is constantly moving. Hanging off the edge of the helicopter, Will took a little sneak peek down the canyon and shook his head, shouting: “Never look down!” But once he’d taken the plunge he seemed to have forgotten his fear and what happened during the test. He posted on Instagram before the jump that they were testing with a dummy, but the dummy’s leg fell off during it. Once he made it on the crash mat and was detached from the helicopter his family and friends looked relieved. They then watched a video of the jump, with Will and Alfonso doing some post-jump analysis. Will said: “You have to commit. “Life is hard, you might get hurt, your heart might get broken, you might lose your job, but you’ve still got to commit.” And commit he did, he was challenged by Yes theory to do the jump. He performed the bungee jump to raise awareness of the charity Global Citizen, which aims to end extreme poverty by 2030. Will’s jump is raising money to support a project called Education Cannot Wait. It provides access to education for children in crisis-affected areas.   Source: BBC

Bose Ogulu has told her son Burna Boy to “tone down the madness” as she celebrated his birthday. END_OF_DOCUMENT_TOKEN_TO_BE_REPLACED

The Hewale Lala (Song Of strength) hit maker Perez Musik gets ready to have his first-ever major concert. END_OF_DOCUMENT_TOKEN_TO_BE_REPLACED

Kofi Sonny, CEO of 610Music, a direct representative for Universal Music Group in Africa, unveiled two of his newly signed artistes to the world over the weekend. The event pulled in dignitaries from all over the globe to witness what many have dubbed “the birth of greatness.” END_OF_DOCUMENT_TOKEN_TO_BE_REPLACED

GuiltyBeatz is ringing in the summer! The Grammy-nominated Ghanaian producer and DJ is back with another dazzling solo effort – an Amapiano-infused dance anthem ‘Universe’ featuring Pop sensation, Mr Hudson and buzzing Ghanaian singer, Twitch 4EVA. END_OF_DOCUMENT_TOKEN_TO_BE_REPLACED