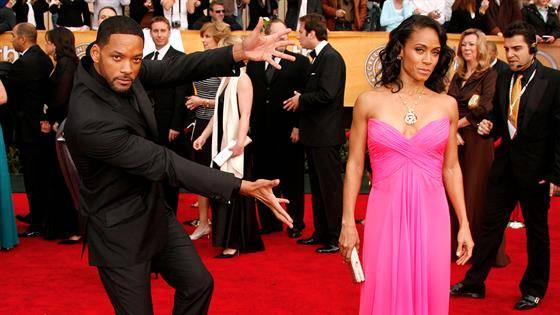 Will Smith x Jada Pinkett-Smith[/caption] Will Smith is getting candid about some difficult times he and his wife Jada Pinkett Smith have had during their marriage. In a clip from Jada’s daytime talk show Red Table Talk, Will discusses how he felt he was “failing miserably” at one point.  Other than Jada, the other two Red Table Talk hosts are also members of the family. Jada is joined by her daughter Willow Smith and mother Adrienne Banfield-Jones on set. Will told the three women, “There was a period of time when mommy woke up and cried for 45 days straight.” He added, “That was the worst I’ve felt in our marriage. I was failing miserably.” Will and Jada have been married for 20 years and over the course of their marriage have discussed seeing other unions dissolve and how they keep their own bond strong. Before his twentieth anniversary with Jada, he told E! News, “Two decades. When you’re married with somebody that long and we were talking about it, we was like, ‘You know, it’s 20 years, what are we gonna do?’ She was like, ‘We’re gonna high-five and keep it moving.'”

In August, Jada posted an Instagram photo of herself, Will, Willow and Trey Smith as they’re all laughing and walking down a sunshine-filled street. “I’ve been watching a lot marriages dissolve around me. It’s been really painful. Marriages change,” she wrote. “Sometimes they need to be reimagined and transformed. Sometimes they are simply over …” Red Table Talk, which is a finalist for an E! People’s Choice Award for Daytime Talk Show of 2018, often features raw and emotional discussions about family, love and forgiveness. In one of her first episodes in May, Jada brought on Will’s ex-wife and mother of Trey, Sheree Fletcher. Jada and Will began dating before his divorce to Sheree was finalized, and Jada apologized for that on her show. She told Sheree, “Here’s the one thing I will say in hindsight, because I did not understand marriage, I didn’t understand divorce, I will say that I probably should’ve fell back.”
Throughout their 20-years as a couple, Will and Jada have continued to rock red carpets and praise each other all over social media but also talk about their relatable parenting moments. “I’ve done some screwy things with my kids, but they’ve survived,” Jada said on one episode. “Some things have worked, and some things haven’t. But in the long run. the one thing that I do know to be true is that when we can talk to our kids openly and honestly—and with love—you rarely go wrong.” She also explained how she and Will were in “constant conflict” after Jaden Smith got cast in The Karate Kid. Overall, the Smith family continues to prove they’re a tight-knit bunch who support each other left and right, even if that means watching Will bungee jump over the Grand Canyon for his birthday. Red Table Talk returns to Facebook Watch on Oct. 22.
Source: eonline.com
]]>
Related Topics:
Up Next

Grammy award-winning Nigerian artist, Wizkid is currently trending after making some statements about the status of the rap genre in Nigeria. END_OF_DOCUMENT_TOKEN_TO_BE_REPLACED

Nigerian Disc Jockey and daughter to billionaire Femi Otedola, DJ Cuppy has outdoored the man in her life for the very first time on social media. END_OF_DOCUMENT_TOKEN_TO_BE_REPLACED

On Air Personality and YouTuber, Jessica Opare Saforo has responded to Shatta Wale’s desire to marry her. END_OF_DOCUMENT_TOKEN_TO_BE_REPLACED

Ghanaian model and entrepreneur, Hamamat Montia has welcomed a baby, months after announcing her pregnancy on Instagram.  END_OF_DOCUMENT_TOKEN_TO_BE_REPLACED