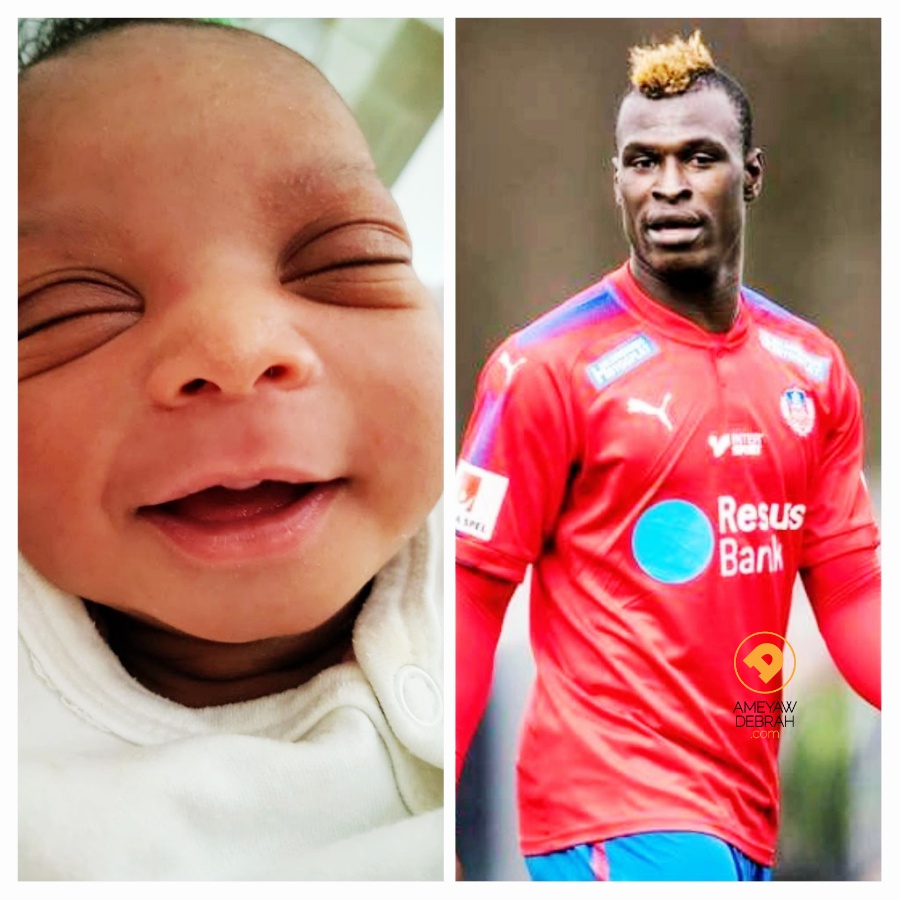 Ghana is not new to scandalous news about footballers, getting women pregnant all over the world. Ghanaian professional footballer, Edwin Gyimah, who currently plays for South African side, Bidvest Wits is the latest on the list. Nora, a woman based in Belgium is accusing him of giving birth for the footballer, who is now refusing his daddy duties. According to her, she only found out later after her pregnancy that Gyimah was already married. 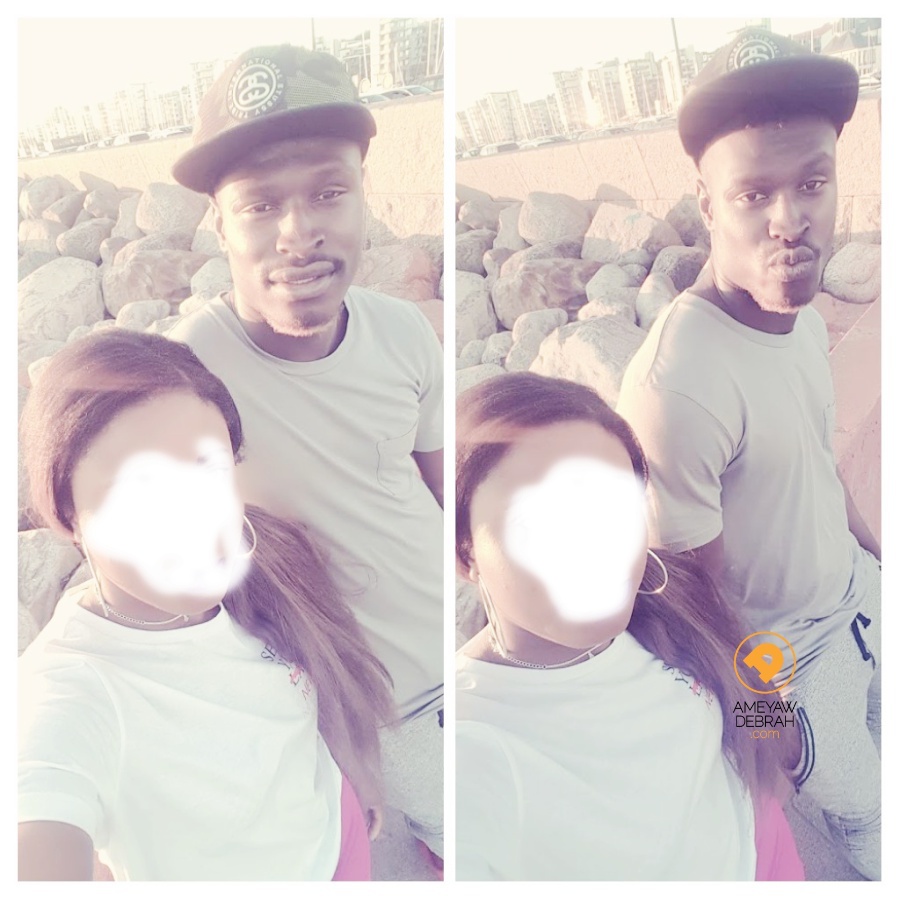 Narrating her story to AmeyawDebrah.com, Nora wrote: “It was September 6 2016, and I went to Russia to watch a friendly game between Ghana and Russia in Moscow. So be the match, I went to the Kempiski hotel Moscow where black stars of Ghana lodge. So I say some of the players and officials. I Met a player by the name Edwin Gyimah. I didn’t know he was a player. We talked and exchange contact. I left the following day after the match to Belgium where I based. I didn’t write or spoke with him for some time, so one day I was going though my contacts and texted him, so we started talking he was playing in south Africa, he asked to come over and a lot but I didn’t pay attention to him. We stopped chatting for a while till when he came to Sweden to play for a new club. We came in contact again, and he decided we should hook up, I didn’t want to but because of his words I believed and went to see him on the 7th of may 2017 in Sweden, he bought my flight ticket. I thought am going to see him and return. He didn’t allow me, we got to know ourselves a whole lots, and he told me he wants to marry me a lot. So something happened and through that I got pregnant, he promised a lot to care about the pregnancy and buy the uborn child things, he promised to come and see my family, but when I left his place, everything changed. I got to know he’s married with kids, and I asked before he said yes. Since I got pregnant. That’s all he doesn’t care about me again, all my hospital bills, he doesn’t even care about my condition. And I don’t know any family member of him. Now I have given birth to a baby girl for about 2 months now. Not even a dipper or a cedi, he has refuse to take care of his own child and has blocked me on every social media platforms. I don’t need his money I just want him to care for his daughter”   In some WhatsApp conversations Edwin tried to give Nora some reassurance that he would be supporting the baby, while in others, he just couldn’t be bothered. Here are some excerpts: 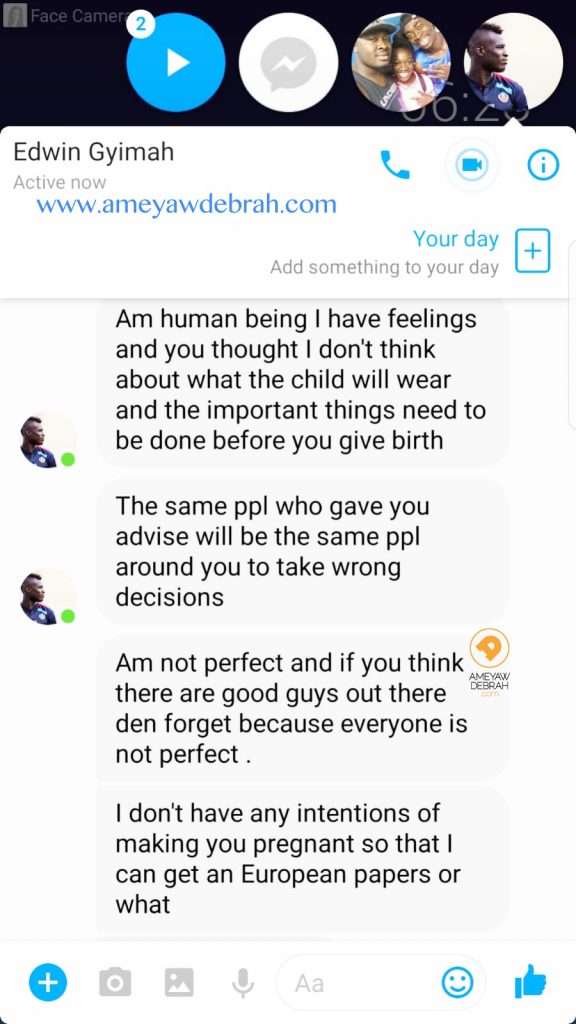 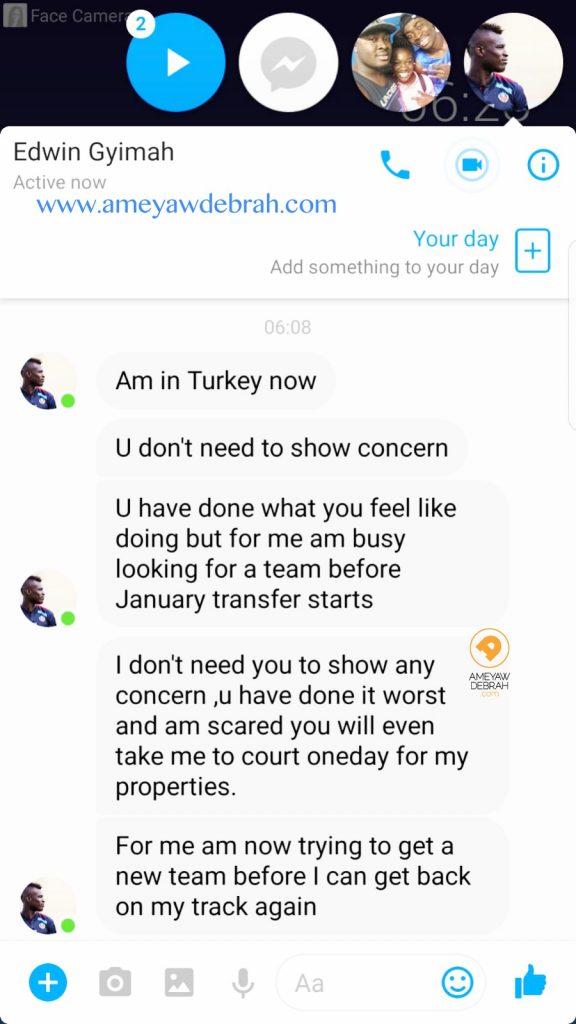 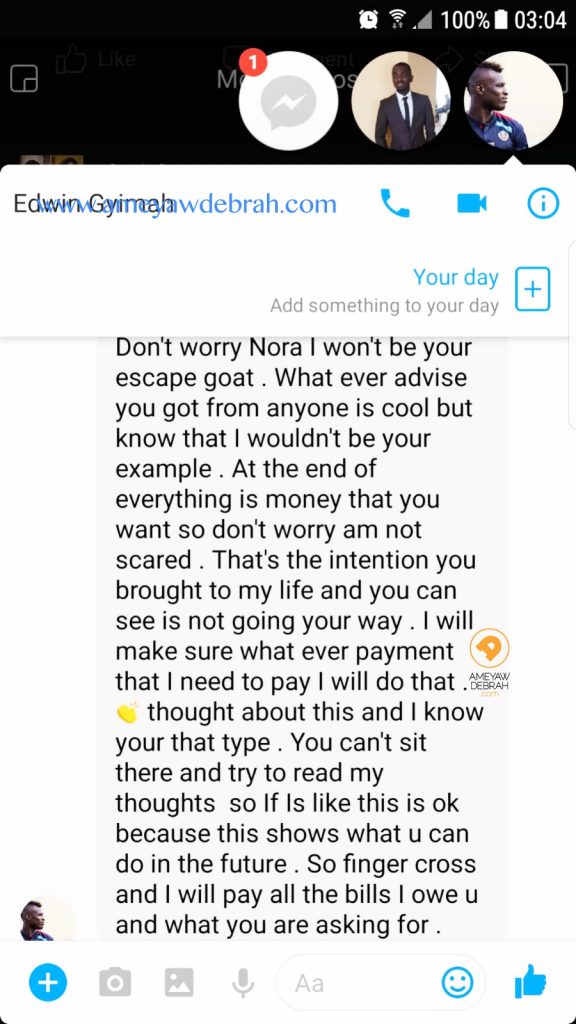 “Let me take care of the baby I will get back to you very soon please”   “My wife has ask for a divorce because she saw the messages and what’s happening between us . Is been two weeks now not seeing them because she left deosnt and me want me to see them. “   “U can go around telling the whole world about me but if my problems are not fix how can I fix someone’s own. She has send me to court for a divorce so the court has urge me not to touch anything that I hv with her because everything that I hv has been joint to her”   Below are excerpts from a WhatsApp conversation Edwin had with Nora’s cousin, who is a mutual friend.   “Hi morning, Nora came in my and showed me love , the luv she had for me was real, so I don’t hv any intentions of treating her bad or not attending to her needs . There are somethings happening now and is affecting me . Is not everything that I can tell Nora but sometimes she feels like I hv ignored her and not fulfilling my promise . I repeat again that I hv no right to treat her like this because she hasn’t done me wrong. I also hv an affection for her, I know how it is in her situation even thou am not a woman . There are something’s that’s holding me back . And is hard to explain to Nora because she wouldn’t believe me. I hv a broken home now because of what is happening between me and Nora . I can’t be so wicked not to even send her 100 erous , just saying. There are something’s I need to tell her and discuss with her and I promise I will tell u the same thing. I couldn’t sleep the whole of last night. Because I hv been thinking about so many things expercially Nora.”  ]]>

Here we go again! Woman who claims she's been dating John Dumelo for the 4 years pops up ahead of his wedding

Bose Ogulu has told her son Burna Boy to “tone down the madness” as she celebrated his birthday. END_OF_DOCUMENT_TOKEN_TO_BE_REPLACED

The Hewale Lala (Song Of strength) hit maker Perez Musik gets ready to have his first-ever major concert. END_OF_DOCUMENT_TOKEN_TO_BE_REPLACED

Kofi Sonny, CEO of 610Music, a direct representative for Universal Music Group in Africa, unveiled two of his newly signed artistes to the world over the weekend. The event pulled in dignitaries from all over the globe to witness what many have dubbed “the birth of greatness.” END_OF_DOCUMENT_TOKEN_TO_BE_REPLACED