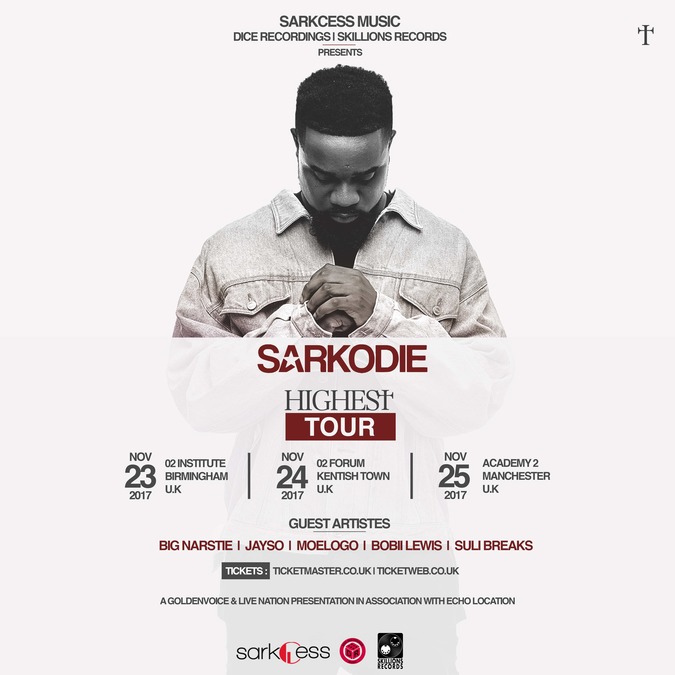 Following the successful release of his fifth studio album Highest which dominated iTunes album charts around the world, Sarkodie is proud to announce that he will be embarking on a UK nationwide ‘Highest’ tour in November, with some special guests including Big Narstie, Jayso, Moelogo, Bobii Lewis and Suli Breaks.

The nationwide tour, presented by Sarkcess Music and Dice Recordings, in conjuction with Live Nation, GoldenVoice and Echo Location, will see the legendary Ghanaian rap star headline the O2 Institute in Birmingham on November 23, before heading to London to headline at the O2 Forum Kentish Town on November 24, and rounding up the tour in Manchester, headling Academy 2 on November 25.
In other news, Sarkodie, who released six music videos on the same day as his Highest album all at the same time, in an unprecedented move that was first of its kind for any African artist, is already gearing up to release his next music video from the Highest album, for early fan-favourite ‘Far Away’ featuring Mavin Records’ very own Korede Bello. You can watch the behind-the-scenes footage from the upcoming visuals here.
Tickets for Sarkodie’s ‘Highest’ UK tour are now available via Ticketmaster here.
]]>
Related Topics:sarkodie
Up Next

Ghanaian rapper, Okyeame Kwame has opined that the new crop of rappers in the industry are far “better” than him and others who have been in the game for two decades. END_OF_DOCUMENT_TOKEN_TO_BE_REPLACED

Ghanaian rapper, Sarkodie may be gearing up to speak against the governance of the nation by the ruling New Patriotic Party (NPP). END_OF_DOCUMENT_TOKEN_TO_BE_REPLACED

Ghana’s social media has been buzzing after a video showing a young  Ghanaian in police escort to go and buy a burger went viral! END_OF_DOCUMENT_TOKEN_TO_BE_REPLACED

Broadcast Journalist at Metro TV, Bridget Otoo has come after employers who fail to pay their workers, yet live lavishly. END_OF_DOCUMENT_TOKEN_TO_BE_REPLACED