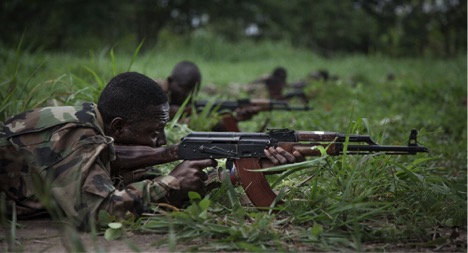 The end of July 2021 is marked by several important UN meetings concerning the fate of the Central African Republic. The sanctions measures imposed by the UN resolution 2127, which also established an arms embargo, sanctions committee and panel of experts, are expiring at the end of the month. The mandate of the Panel of Experts supporting the 2127 CAR Sanctions Committee, which expires on 31 August, is also have to be renewed in July.

This meeting of the UN Security Counsel is an opportunity for the Central African authorities to try to persuade the UN once again to lift the arms embargo, that keeps the national army underequipped.

The UNSC has imposed an arms embargo on the Central African Republic (CAR) since 2013. It bans all supplies of arms and related materiel to the country except to the CAR security forces if approved in advance by the relevant UN Sanctions Committee. The armed conflict of 2013 led to increasing violence and widespread human rights abuses in the Republic, so the embargo seemed to be an appropriate step back then. But is it still working to ameliorate situation in the country?

The recent events in the CAR has shown that the national defense and security structures has evolved greatly since the times when arms embargo was introduced. The reformation of the national army led to strengthening the force: when the coalition of armed groups known as CPC tried to disrupt the electoral process in the Republic in 2020-2021, the swift and professional response from the national forces (the FACA), supported by Russian and Rwandan allies, allowed not only to shatter this assault, but to launch a successful counterattack that resulted in liberation of the territories that had been under control of the armed groups for years.

The biggest challenge for the FACA, as cited by many military researchers, is dire underequipment of the regular defense forces, compared to the CPC fighters. The core of the problem is that the government, bound by the UN’s resolutions, cannot provide enough weaponry and ammunition to its soldiers, while the armed groups get their supplies via shadow arms trafficking routs, that use the porous African borders with less stable countries, like Chad or Sudan.

The CAR Government argued for year that the requirement for advanced approval by the relevant UN sanctions committee for arms supplies to government forces posed a barrier to solving the country’s security crisis. On January 31, 2021, despite the growing violence from CPC armed groups in the CAR, the Security Council decided to renew its Central African Republic sanctions regime for six months — including an arms and ammunition embargo, — while renewing the mandate its related Panel of Experts for seven months. However, there was a range of exemptions to the arms embargo: supplies intended solely to support the United Nations Multidimensional Integrated Stabilization Mission in the Central African Republic (MINUSCA) and training missions deployed by the European Union and France.

The representatives of the Russian Federation and China have always been the only ones to urge UN Security Council to respect the CAR’s vison of the situation, but recently Angola has joined their position. Angolan President Joao Lourenco, speaking as the acting president of the International Conference on the Great Lakes Region, argued for the lifting of an arms embargo, pointing out that “it is now while the country counts on the presence of MINUSCA troops and other foreign forces on the ground, the appropriate time to help the Central African Republic to train its troops so as to guarantee its own defense and security, when the foreign forces finish their mission and withdraw”.

The mandate of the UN Multidimensional Integrated Stabilization Mission in the Central African Republic (MINUSCA), which will on be on the agenda for the recent meetings, expires on 15 November 2021. The Mission has been constantly losing popularity with the locals, who consider MINUSCA to be rather inefficient. Their opinion is supported by human right experts, who argue that the mandate of the Mission should be thoroughly revised taking into account how pricy is the deployment of the UN force in the CAR.

The security situation in the Central African Republic has change greatly since the last UN Security Council meeting in January. CAR’s authorities have worked hard to attain the revision of sanction measures, ideally with the total lift of the embargo. But the is for the Security Council to make and it will tell a lot about their vision of the present and the future of the Central African Republic.