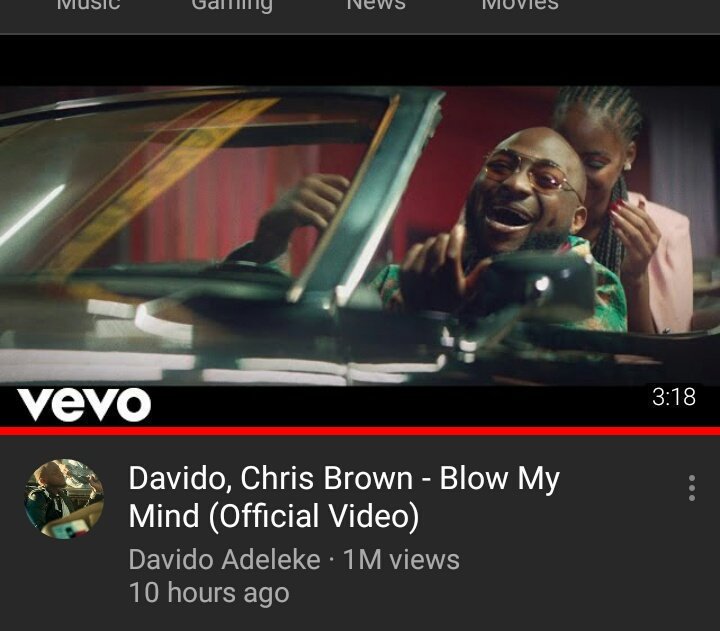 Nigerian pop star, Davido’s visual clip for his latest song “Blow My Mind” has broken the record for the fastest music video To hit 1 million YouTube Views in Nigeria just 10hrs after its release.

Davido’s Blow My Mind ft. Chris Brown has broken the record for the Fastest Music Video To Hit 1 million YouTube Views in Nigeria. The video amassed 1 million views 11 hours after it was released. pic.twitter.com/rb9Wj656TV

The video opens up with Davido singing his verse in a motel room with a girl chilling on the bed behind him. While Chris Brown pulled off some impressive choreography in front of the motel in the video.

The video was directed by Edgar Esteves and shot in California.

Blow my mind also sits at number one on Apple Music’s top 100 songs in Nigeria.

‘I lied, God never gave me that medicine’ – Brother Sammy says as he begs FDA for forgiveness

Viola Davis makes a stunning transformation in the new trailer for ‘The Woman King’, in which she plays Nanisca, leader of the all-female warriors known as the Agojie. END_OF_DOCUMENT_TOKEN_TO_BE_REPLACED

African-American businessman and jet broker Kelvin Mensah, popularly known as PJKev has added his voice to the many people against the building of the National Cathedral. END_OF_DOCUMENT_TOKEN_TO_BE_REPLACED

Nigerian hip-hop artiste, Eedris Abdulkareem has disclosed that he is battling kidney failure and will have a surgical operation at the end of July. END_OF_DOCUMENT_TOKEN_TO_BE_REPLACED

According to reports from Nigeria, unidentified gunmen have attacked an ‘advance team’ of President Buhari’s presidential aides leading to injuries to two people. END_OF_DOCUMENT_TOKEN_TO_BE_REPLACED

Sensational highlife/afrobeat artist KiDi has said that his dream is to collaborate with Daddy Lumba on a song. END_OF_DOCUMENT_TOKEN_TO_BE_REPLACED