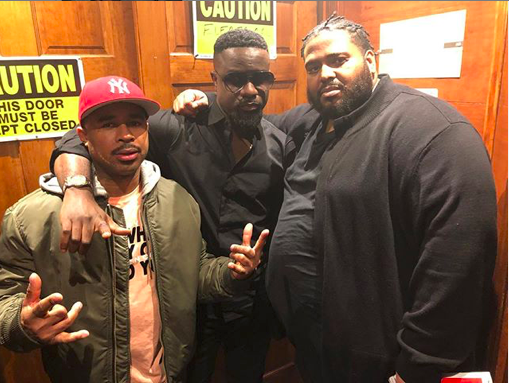 DC-based music executive, Emmit ‘E-Class’ Walker has given a shout out to Sarkodie for passing through an ‘Adult Nightclub’ in Washington DC.

It appears that when Sarkodie posted on social media that he was doing a late step out on Saturday night, it was coded for going to the strip club.

Emmit gave it all out when he posted on Instagram: “Big ups to the homie @sarkodie came through @thehousenightclub_ aka @thehousestripclub him and the whole fam showed love tonight. Make sure y’all link with my brother @deejaypopkorn when you in my city fellas”

Emmitt earlier in the day promoted Sarkodie’s appearance at the club saying:

In December 2017, Emmitt Walker made the news when he shamed a white woman who told him he was “in the wrong place” while queuing for priority boarding – but apologised when his post went viral.

Emmit Walker had bought a first-class ticket to fly from Ronald Reagan Washington National Airport in DC to the Dominican Republic to celebrate his 37th birthday.

But celebrations got off to a rocky start when he claimed a fellow passenger tried to cut in front of him in the queue after assuming he wouldn’t be in first class.

Furious Emmit ranted about the confrontation on Facebook, saying: “Her: excuse me I believe you may be in the wrong place you need to let us thru. This line is for priority boarding.

“Her: Yes…now excuse me they will call y’all after we board.

WATCH: Son of Kwame Despite, Kennedy announces proposal to his girlfriend on a plane