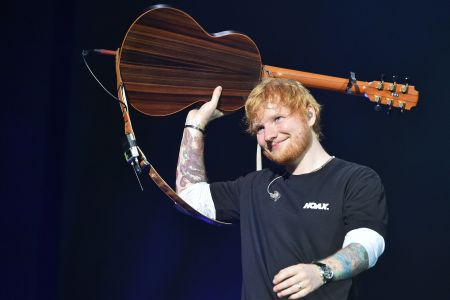 British pop star, Ed Sheeran has announced he is taking a “break” from music and social media until he has lived a little more to actually have something to write about.

The singer made the announcement on Christmas Eve in an Instagram statement captioned “BRB”.

Ed wrote: “Hello all. Gonna go on another break again. The Divide era and tour changed my life in so many ways, but now it’s all over it’s time to go out and see some more of the world.

“I’ve been a bit non-stop since 2017 so I’m just gonna take a breather to travel, write and read. I’ll be off all social media until it’s time to come back.

He announced a similar break from social media this time four years ago, saying he found himself “seeing the world through a screen and not my eyes”.

But after his first return, the 28-year-old managed to rack up 32 million followers on Instagram.

Related Topics:Ed Sheeran
Up Next

Dr. Dre beats Taylor Swift to top the list of music earners of the decade

Amber Heard’s legal teams filed an official motion in court on Friday that the verdict in her blockbuster case against Johnny Depp is thrown out. END_OF_DOCUMENT_TOKEN_TO_BE_REPLACED

US clergyman, Creflo Dollar, has denounced his position on tithing. For many years, Creflo had preached on the importance of Tithing and had informed his congregation that failing to tithe opens the door for devourers to come in and destroy a person’s life. END_OF_DOCUMENT_TOKEN_TO_BE_REPLACED

David Beckham and Victoria Beckham have taken to Instagram to profess their love for each other on their 23rd wedding anniversary. END_OF_DOCUMENT_TOKEN_TO_BE_REPLACED

Chris Brown has said the public is only interested in negative news about him but go silent when he drops an album. END_OF_DOCUMENT_TOKEN_TO_BE_REPLACED

Congratulations are in order for singer Jhené Aiko and rapper Big Sean as they are reportedly expecting their first child together. END_OF_DOCUMENT_TOKEN_TO_BE_REPLACED

Videos have emerged of the moment a Russian ice hockey star who signed a million-dollar contract with an American team was rounded up by Russian policemen and taken to an army enlistment office before he is sent to fight in the war in Ukraine. END_OF_DOCUMENT_TOKEN_TO_BE_REPLACED