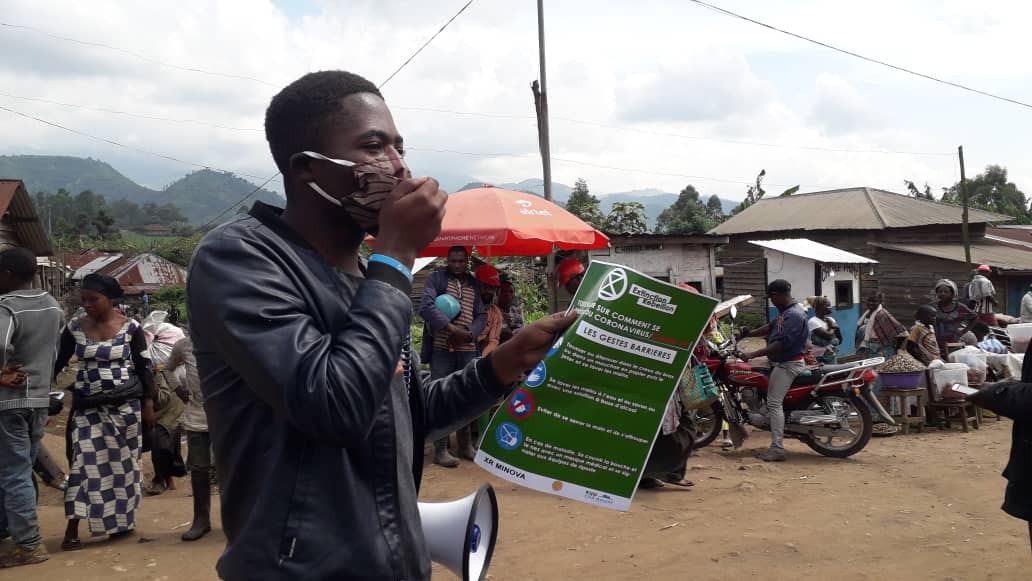 XR Minova in the Democratic Republic of Congo group visited the local markeet to sensitize their on how to protect themsselves against CoViD-19. Credit: Extinction Rebellion Minova

Just like reacting to a global pandemic is crucial, so is reacting to the impact of the Climate and Ecological Crisis on Africa, the region of the earth least responsible for it but condemned to bear the brunt of it. On this years’ Africa Day, commemorating 57 years since the founding of the Organisation of African Unity (OAU), now  African Union(AU), Extinction Rebellion takes a look at the state of African climate affairs with Love and Rage in the Times of the Coronavirus.

Drastically changing weather patterns, droughts, floods, locusts and even pandemics, are manifestations of a growing threat to the long-term health, safety and prosperity of the people of Africa, particularly the most vulnerable. Despite reeling, like everyone else, from the pandemic, Extinction Rebellion (XR) Africa continues to act as a watchdog for that other great Emergency the continent faces.

Extinction Rebellion Kenya defines the Coronavirus as the perfect distraction, enabling Kenya’s Wildlife Service (KWS) to forge ahead with its proposal to build luxury hotels, swimming pools and lodges within the Nairobi National Park (NNP). “The proposal was met with shock and outcries from environmental conservationists and the general public alike. We decry how the park is being dismantled, bit by bit. Profits are being put before life, found in irreplaceable ecosystems,” says Brian, Media Coordinator for XR Nairobi. Government and private investors steadily eat away at large swathes of the conservation area for financial benefit. Given the fragile ecosystem of the park and the diminished territory left available for wildlife, any further damage will have dire consequences not only for the animal population but also, for adjacent indigenous communities whose ancestral lands lie within the reserve. What’s left of them.

The proposed development within NNP serves only the interest of the wealthy and politicians, who stand to obtain considerable financial gain while destroying the national commons. This Coronavirus push is just one more example of wildlife reserve erosion experienced across the country through land sub-division, selling-off and mining, directly linked to a decrease in its animal populations. Lynnette Kiboro and Christopher Kiboro, whose findings were published in the International Journal of Science and Research, warn of its negative impact, underlining how “it is crucial for the government and other stakeholders to formulate legislation on conservation and protection of dispersal areas.”

XR Uganda has witnessed massively destructive floods across large parts of the country. Crops, such as cassava and ground nuts, have been decimated. Severe food shortages are reported, as prices of essential goods soar because of climbing transport costs and increasing inaccessibility. Some 300,000 Ugandans have been converted into climate refugees as they flee the effects of the above average rainfall. “According to the Uganda Meteorological Department, unusually heavy rains are expected to continue in the coming weeks across the country. District upon district are being laid to waste by rising  waters, as the Coronavirus rages in the background.” describes Anette, XR Kigali’s Regional Coordinator.

Meanwhile, in Africa’s dirtiest Greenhouse Gas emitter coal guzzling South Africa, just decided to plunge a whole lot further into filthy energy by signing a huge environmentally devastating 90-year deal to produce energy for China, according to the Amabungani Energy Research Centre. The proposed 4600-megawatt coal fired power station in Limpopo will involve mineral extraction of chrome, manganese, coking coal and lime, creating fewer jobs than renewables and spurring on global warming and up to 3 million premature deaths annually by the year 2100. “That South Africa is building a coal station, financed by China, in the midst of a scientifically proven Climate and Ecological Emergency, is akin to asking people to go to a soccer match, with China sponsoring the teams on the field during a scientifically proven pandemic,” laments Media Coordinator Orthalia from XR Gauteng in South Africa.

World Health Organization experts are fearful Africa will suffer a prolonged outbreak of Covid-19 set to linger for a few years. International Panel on Climate Change experts worry the impact of Climate and Ecological Breakdown will also run deeper here.  The still ensuing 2020 locust plague ravishing both Kenya and Uganda, among other places, demonstrates how the African climate and ecosystems are controlled by a complex mix of large-scale weather systems, many from distant parts of the planet, in comparison with almost all other inhabited regions.

Extinction Rebellion has verified how the huge focus on containing the virus has led to other health issues being neglected, not least of which, the climate and environment. One of the hidden lights in the darkness of the pandemic is how XR Africa has had a chance to test and fine tune its international and local network of members who reached out to local communities and helped mitigate and prepare for the outbreak. The movement will take advantage of this newfound state of alarm among citizens and governments and demand no return to business as usual, the real Emergency. “XR Africa will be vigilant using its international network, more resilient than ever, thanks to our coming together by helping each other during the global Coronavirus crisis. Just because we are wearing face masks, doesn’t mean we are gagged,” says Moses media coordinator with XR Benue in Nigeria.

Extinction Rebellion cannot think of a better way to celebrate Africa Day, the birth of unity promised by the OAU, than to hold the AU and global governments accountable by raising African voices across the planet.

Present in over 20 African countries, XR Africa will ensure the impact of coronavirus is not an excuse to forget about a far more serious crisis. Its African based PR team pledges to provide the world’s media with regular updatesto ensure the planet is aware of how the Climate and Ecological Emergency plays out across the continent.

3.  A return to African democratic values, historically egalitarian societies in which government was more a matter of consensus among the entire adult population, through the introduction of citizen’s assemblies to guide a response to the Climate and Ecological Emergency, unhindered by economic or political interests, in the interest of all life.

Related Topics:Extinction Rebellion Africa
Up Next