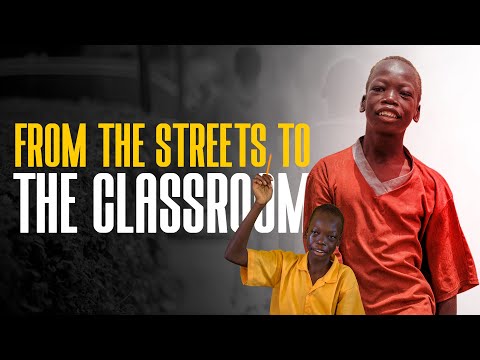 Joseph Boateng Porbi, popularly known by his street name “Ahoɔfɛ”, who hails from Swedru in the central region of Ghana, sneaked his way under a passenger bus to make a living on the streets of Accra at a tender age of ten. The decision came up after Porbi’s parents got divorced, and life became quiet unbearable for him.

Speaking to Benabi Discovery, Porbi mentioned that he’s been on the streets for four years, soliciting for financial assistance from passerby in traffic. Porbi engaged in theft, Tramadol intake and other social vices.

As part of a mandate to tackle streetism in Ghana, Benabi Discovery, a humanitarian advocacy group, decided to change the fate of young street-connected boy. Porbi, whose dream is to become a bank manager in future, agreed to pursue his academics, after rendering an apology to all he might have hurt one way or the other when he was on the street.

The team led by Mr. Benjamin Kumi (founder of Benabi Discovery), proceeded to have young Porbi, who looked quite un-kept, to go under grooming and counselling, before enrolment. Young Porbi was taken to Aboso Benso LA Primary school, and upon the advice of the head teacher, he was made to start from class one, to enable him attain a mastering on phonetics and the alphabets.

Initially, it was envisaged that Porbi will exhibit some traits of aggressiveness and bullying of his peers, but he proved the teaching staff wrong by portraying the best of attitude in class and outside the corridors of the school, which won him the admiration of all and sundry within the school compound. 15years old Porbi seems to be making good progress with no trace of truancy and notoriety as expected from the onset. Head teacher at Aboso Benso LA Primary School asserted.

Delve into the full story by watching the full documentary on Life Changing Story of Abandoned Child, from the street to the classroom. A street boy whose notoriety was believed to be a curse or spiritual connotation.

Benabi Discovery is grateful to all who rendered support in taking Joseph Boateng Porbi off the streets and the headway made in realizing his dreams of becoming a bank manager.

Benabi Discovery Foundation welcomes friends and family who are willing to support Joseph Boateng Porbi aka Ahoɔfɛ through his education in aspiring his dreams.

The Situation of Online Gambling in Ghana