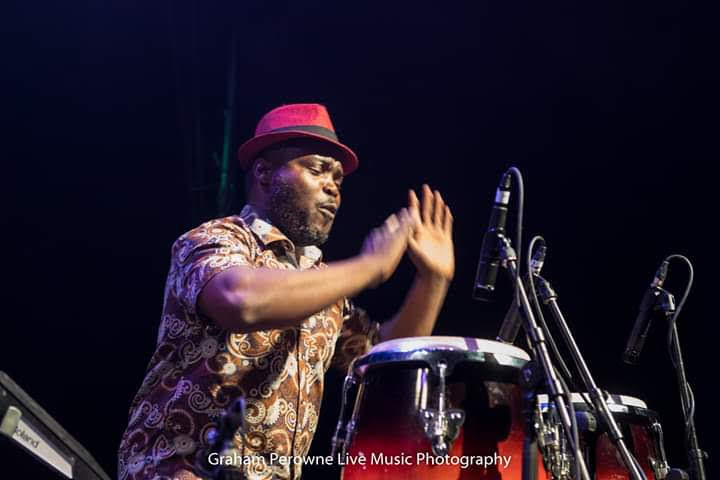 With over 27 years of music experience and working with the likes of the late Michael Jackson, David Bowie, Ginger Baker and other celebrated figures in the music world. Nii Afla Sackey better known as Afla is described as a gingered up self driven Ghanaian performing artist, producer, dancer, an impeccable drummer / instrumentalist filled with fervor to breath a new life of value and relevance through African sounds.

Born and raised in Accra – Ghana to the late Ransford Sackey & Harriet Nelson on 27th October. Afla lived most of his life as a child with his mum and sister at Korle-Gonno/Mamprobi.

He had his basic education at Korle Gonno Methodist School, continued at Ebenezer Secondary School in Accra. Later, he traveled to the UK to do his degree and masters in music at the Guildhall School of Music and Drama. Life as a child for him was filled with ups and down but he remains grateful for every step in the way. Because it has shaped him to be the person he is today.

His stage name Afla is a traditional name given to every first grandson in the family in the Ga community. He launched his career as an artist during his childhood days at Korle Gonno Methodist School when a destiny helper / teacher discovered his ability to play drums dexterously. The teacher recruited him to be part of his professional drumming and dancing group. This sparked his interest in drumming, dancing and later music.

He is associated with Afro fusion, Afro funk, Afro beat and Afro jazz. The icing on the cake is, he has added hip life to his music catalogue. With 2 albums and several singles, Afla has solidified his stand as a Ghanaian living abroad, making praiseworthy impact with African sounds. He is one of the best selling afrobeats artist in UK spreading African sounds across the globe to effect great impact.

Respectively, he has performed to a whole sea of crowd at different venues in Western world. Aside that, he has a strong orchestra that vibrates on stage whenever they perform. This has led to so many successful music collaborations with many musicians. The drum specialist looks forward in collaborating with Shatta Wale, Samini, Kwame Eugene, Stonebwoy, Manifest and a host of other talented acts because of his love for their sounds.

It’s important to note that, he fathoms music in a dynamic manner therefore he produces his own music. He recently started working with a producer called Raz Olsher in the UK. Truth be told, he can’t wait to work with renowned producers like Possi Gee, MOG Beats, Chensee Beats, Fortune Dane, etc.

Best known for his own unique blend of sounds, he expresses his thoughts, ideas and inspirations through drumming. Just by the sound of his drum, you’ll know Afla is on fire. Away from that, he uses sounds to connect people from different walks of life under one umbrella.

Nobody is exempted from enjoying his or fair share of lives challenges. Touring for a long period of time and not seeing his family for a while is one of his greatest challenge. Also, moving from one music venue to the other without enough sleep to him is a herculean task sometimes.

Yet, since music is his chosen field he got no excuses to make. Managing a whole bunch of musicians all by himself is equally a major challenge. Life has been quite challenging but it taught him how to hustle and work hard. As an artist, challenges has helped develop his intellect and enhanced his career.

He has been working on his forthcoming album titled ‘Destination’ which will be released soon in April. Away from that, he has 2 interesting collaborative music albums that will be released later this year. Finally, he’s also preparing to shoot his second video for his second single ‘Lets Party’.

Been able to keep his band actively running for 13 years is his biggest achievement.

Working with the younger generation in music inspires the creative genius in him.

Building a foundation that will help the less fortunate younger generation to gain knowledge in any field of their choice academically that will help shape their future.

His advise to upcoming acts and youths in general is, they should dream big, believe in it, work hard towards it with the attitude of not giving up no matter what happens along the way and it will definitely yield great results with time. Also, they must always put hard work and focus in whatever endeavour they embark on.

And be very honest in the way they relate to people they deal with along the way and that will open so many doors for them as everyone loves to work with a trustworthy and hard working person.

Connect with him on;

40 pictures that prove Independence Day celebrations in Kumasi was one of the best yet!!!

A little over a month after winning the “Female Songwriter of Excellence” award at the famous Maranatha Awards in the USA, Yvonne Asamoah-Tawiah popularly known as Minister Yvonne has been nominated by the Ghana National Gospel Music Awards for their upcoming Christian music awards. END_OF_DOCUMENT_TOKEN_TO_BE_REPLACED

The leadership of University of Ghana Students’ Representative Council are spearheading plans for the 64th UGSRC week celebration. END_OF_DOCUMENT_TOKEN_TO_BE_REPLACED

Experiencing acid refluxes once in a while is not too uncommon. However, when this problem persists and shows up every time you eat, it needs special attention and diagnosis. END_OF_DOCUMENT_TOKEN_TO_BE_REPLACED

Slots are the most attractive casino games, and have been so for a while, according to data from Statista. Studies show that 70% of real money casino games on the internet are slots, as of late 2019.  END_OF_DOCUMENT_TOKEN_TO_BE_REPLACED