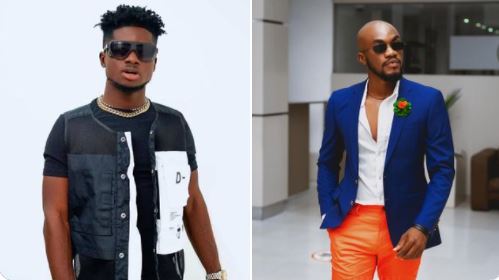 Responding to this accusation in an interview on HITZ FM, Kuami Eugene said:

“This is not the first time Mr Drew has been coming at me, I don;t know what he wants but me dierr I no go mind you. I think he needs that attention and he wishes I give it to him.”

He will get there, he’s new and he just came, They should allow him to explore himself and if this is how he wants to do it then he has the room to himself. He should have fun.” he added.

In accord with information obtained by @yencomgh, @mrdrewofficial said in an interview that @kuamieugene is an expert when it comes to stealing other artiste’s songs.

No plans of relocating to Ghana yet – Twitter CEO, Jack Dorsey responds

KiDi has responded to the heavy social media trolling he was subjected to after losing the VGMA ‘Artiste Of The Year’ to Diana Hamilton. END_OF_DOCUMENT_TOKEN_TO_BE_REPLACED

Wiyaala has dropped “Coming With Fire”, her first single for 2022, and follow up to last year’s popular “Yaga Yaga,” and it is an explosive cocktail of positive energy heavily influenced by the work of K.O.G (Kweku of Ghana), an internationally renowned professional UK based musician, artist, songwriter, percussionist, and multi-instrumentalist from Elmina in Ghana. END_OF_DOCUMENT_TOKEN_TO_BE_REPLACED