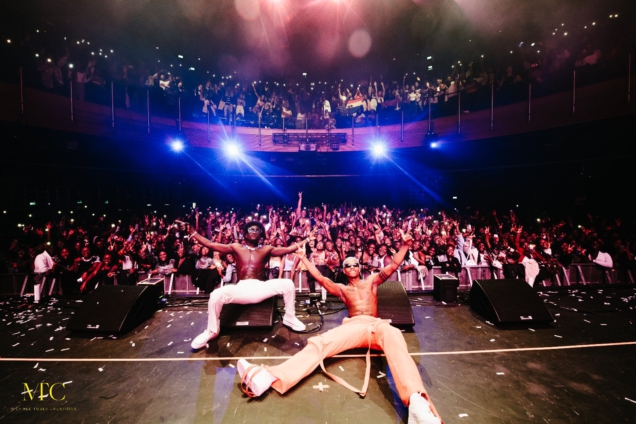 The Lynx signees took over The O2 Indigo with an electrifying performance to commemorate Ghana’s 65th Independence Day celebration.

The duo entertained the audience at the arena with back-to-back hit songs to which patrons sang and danced along.

Patoranking, Mayorkun, MsBanks, Eugy, Darkoo among others were also present.

This becomes their foremost headline show in the UK which many enthusiasts predict could be the first of many.

KiDi later expressed his appreciation to all who contributed to making the landmark concert a success.

London, thank you for being part of this journey.
To our Superhero team who put this entire show together , friends , partners , family , fans, to all the amazing superstars that came thru for us , we appreciate you so much 🔥✊🏽
Let’s do this again soon 💙🇬🇭 pic.twitter.com/2nKm6ei5Gn

See some videos from the sold-out concert below.

Kuami Eugene doing the lords work! Showing them how Rockstar does it!🥰🥳🔥🔥 congrats @KuamiEugene #KiDiKuamiEugeneIndigo pic.twitter.com/4WRasuj5du

2 years down, you still give me butterflies- Fella Makafui to Medikal on wedding anniversary

Going naked in front of Samini was not a big deal, I’ve birthed 5 children- Stephanie Benson

Ghanaian rapper, Kwaw Kese has reacted to the trending purported copy of a will of Kwadwo Owusu Afriyie, popularly known as Sir John. END_OF_DOCUMENT_TOKEN_TO_BE_REPLACED

Nigerian actress, Eucharia Anunobi, has revealed she urgently needs a man to settle down with. END_OF_DOCUMENT_TOKEN_TO_BE_REPLACED

General Manager of GhOne TV, Nana Aba Anamoah and Broadcaster, Serwaa Amihere have chided supporters of the New Patriotic Party (NPP) for defending the purported copy of a will of Kwadwo Owusu Afriyie, popularly known as Sir John. END_OF_DOCUMENT_TOKEN_TO_BE_REPLACED

Kourtney Kardashian and Travis Barker have got married – again. END_OF_DOCUMENT_TOKEN_TO_BE_REPLACED