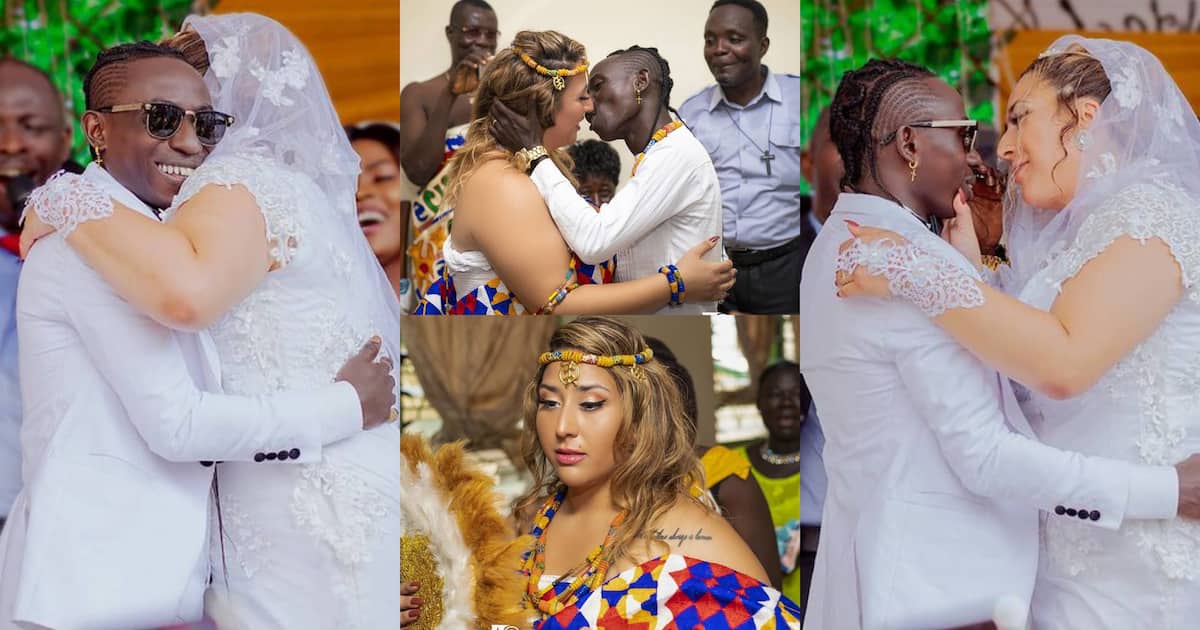 Liha Miller, the wife of musician Patapaa, has reacted to claims that the couple’s marriage is rocky and on the verge of ending.
Liha in an interview with Zionfelix has explained she was really surprised when the rumours broke out on social media because there were untrue.

According to her, even if the reports were true, they should have come from her and not for her to read about it on social media.

Reports were rife a few weeks ago that the couple have gone their separate ways after tying the knot in a solemn ceremony in January 2021 which has been blessed with a son.

The musician in a post which sought to confirm the speculations blamed blogger Zionfelix for the turnout of events.

He is quoted to have said: “It’s because of this guy I don’t want to see my wife again. He is the problem between I and my wife [sic]“.

But clarifying issues in an interview, Liha admitted every marriage has its own problems and theirs could be no exception.

“The fact that I don’t wear my ring always doesn’t mean we are divorced and even if our marriage is troubled, nobody has the right to talk about it and make recommendations for us except ourselves and parents,” Liha told Zionfelix in the interview.

Kumawood actor, Patrick Safo has reportedly drowned while in a pool

Viola Davis makes a stunning transformation in the new trailer for ‘The Woman King’, in which she plays Nanisca, leader of the all-female warriors known as the Agojie. END_OF_DOCUMENT_TOKEN_TO_BE_REPLACED

African-American businessman and jet broker Kelvin Mensah, popularly known as PJKev has added his voice to the many people against the building of the National Cathedral. END_OF_DOCUMENT_TOKEN_TO_BE_REPLACED

Nigerian hip-hop artiste, Eedris Abdulkareem has disclosed that he is battling kidney failure and will have a surgical operation at the end of July. END_OF_DOCUMENT_TOKEN_TO_BE_REPLACED

According to reports from Nigeria, unidentified gunmen have attacked an ‘advance team’ of President Buhari’s presidential aides leading to injuries to two people. END_OF_DOCUMENT_TOKEN_TO_BE_REPLACED

Sensational highlife/afrobeat artist KiDi has said that his dream is to collaborate with Daddy Lumba on a song. END_OF_DOCUMENT_TOKEN_TO_BE_REPLACED