Ghanaian actor, John Dumelo and aspiring member of parliament for the Ayawaso West Wuogon Constituency has stated that his political ambition is geared towards serving humanity.

According to him, he’s looking at a long future in politics, hence, failing his constituents is not on his agenda.

John Dumelo was reacting to Samini’s caution a few weeks back during an interview on Accra100.5FM’s Entertainment Capital programme.

The reggae/dancehall artiste who had some doubts about John’s political ambition, threw in his support after weeks of monitoring his activities.

“If you are genuinely ready for the task. I’m with you bro. I support the vision behind Yung and able people taking charge. Pls don’t let our support be in vein. Support from the youth toward you is purely nonpartisan and it’s high time you acknowledge that. #Idey4u” Samini tweeted in support. 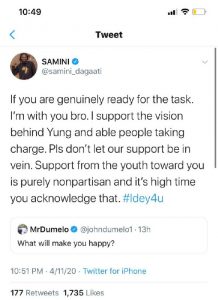 Reacting to Samini’s tweet, John reiterated that his intentions were solely to serve and represent the youth in his constituency.

“That’s what I keep telling people; when they say: ‘Politicians are the same, when John goes there, that’s what he will do, too’, I always tell them that: ‘Look, if I fail the people, I’ve failed God, that’s the truth of the matter.

“So, I can’t be a Member of Parliament and fail then that means that my whole political life span is a good four years. We all know that every politician or anybody who wants to be a member of parliament wants to do 8 years so that he knows that, yes, he also came to serve people. And, so, I’m looking at the future of being in politics and, so, I’m not here to fail; I’m here to serve humanity and let everybody have a prosperous life,” he said.

“I’m appreciative of what he [Samini] has said and I think for me, it’s a complement. I just hope and pray that, the thing, I can’t do it all alone; for everything to be possible, we all have to unite. When I become a Member of Parliament, I need everybody on board who can help me so everything will be successful in Ayawaso West Constituency. So, I’m not here to fail, I’m here to serve the people; I’m here to represent the youth especially, in Ayawaso West Constituency,” the entrepreneur added.

Meanwhile, John Dumelo is busy at work solving one problem after the other in his constituency. Just a few days ago, the actor constructed water access points for some residents of his constituency.

Ghanaian actor and entrepreneur, John Dumelo has requested for the funds set aside for the Black Stars, had they qualified to the round of 16 in the FIFA 2022 World Cup, to be used to purchase desks for school kids. END_OF_DOCUMENT_TOKEN_TO_BE_REPLACED

END_OF_DOCUMENT_TOKEN_TO_BE_REPLACED

Accra’s biggest and only photo festival, “Wondaland” is back; this time bigger and better. END_OF_DOCUMENT_TOKEN_TO_BE_REPLACED