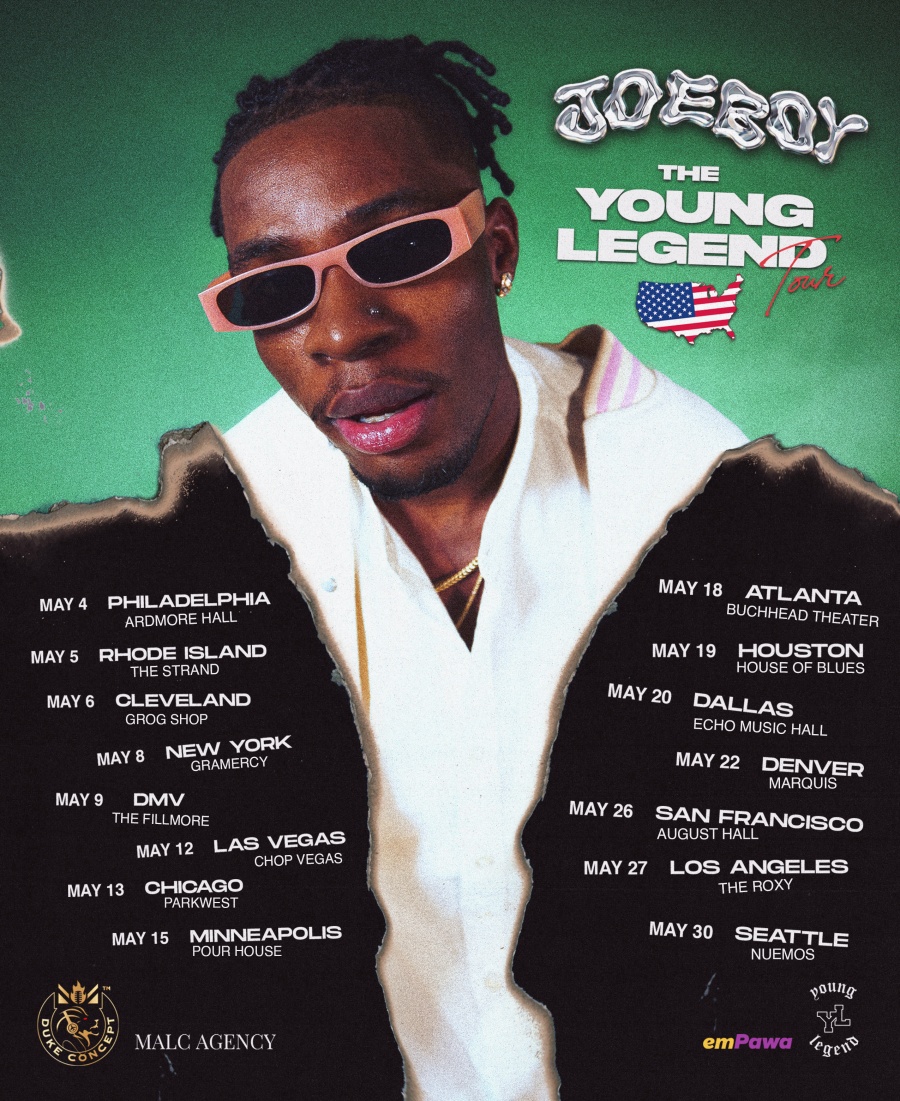 One of African music’s brightest new stars, Joeboy, today announced his first headlining tour of North America. Starting in Philadelphia, PA on May 4 and ending in Seattle, WA on May 30, the Nigerian pop star will be bringing his youthful lyrics and captivating beats to 15 cities across the US  on this whirlwind tour.

Having gained recognition in 2019 with the release of his EP Love & Light, Joeboy quickly ascended to stardom in Nigeria. His single ‘Baby’ received critical acclaim and recognition worldwide as he charted globally, and hit number one in over 10 African countries, including Kenya, Tanzania, Ghana, and his home country of Nigeria. The song has now reached over 80 million views on YouTube alone.

Joeboy released his first full length LP, Somewhere Between Beauty & Magic in February 2022. As the sole performer on the project, the 14-track project highlights Joeboy’s production finesse and sultry, light-hearted vocals. His latest single ‘Sip(Alcohol)’ has over 400 million streams across platforms, having also topped singles charts around the world. His knack for creating instant hits has landed him widespread industry support and coverage from the likes of Rolling Stone, Billboard, COMPLEX, Pitchfork and more.

Joeboy’s tour is being produced by Duke Concept; the preeminent production and promotion  company for Afro-Caribbean artists touring North America. Duke Concept has brought many African artists to the US for the first time and has handled touring and logistics for some of the top African talent including Burna Boy, Davido, Wizkid, Fireboy, etc.

Fri May 6 – Cleveland, OH – The Cambridge

Does Rotimi know about this?- Stonebwoy humorously reacts to Mr Drew’s request for a feature

Sarkodie’s next virtual concert to be held on the desert in Dubai on March, 20th

Ghanaian movie producer, Pascal Aka has revealed how movie awards schemes in Ghana do not take the movie industry seriously compared to their Nigerian counterparts. END_OF_DOCUMENT_TOKEN_TO_BE_REPLACED

Ghanaian actor, Prince David Osei has expressed his concerns about the implementation of tax on mobile electronic transactions (e-levy) and if the government will put the monies into good use. END_OF_DOCUMENT_TOKEN_TO_BE_REPLACED

Ghanaian Lawyer, Sandra Ankobiah is not new to the fine and luxurious life. END_OF_DOCUMENT_TOKEN_TO_BE_REPLACED

General Manager of GhOne TV, Nana Aba Anamoah has cautioned young girls not to fall for the pressures of society and rush into marriages. END_OF_DOCUMENT_TOKEN_TO_BE_REPLACED