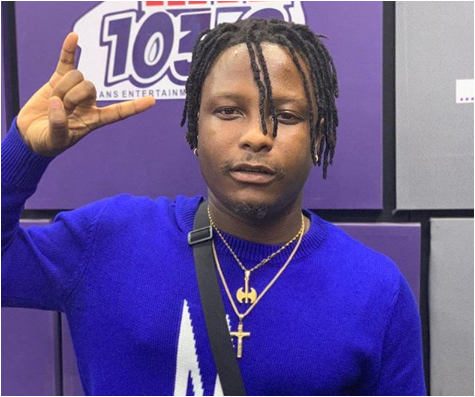 Less than 20 minutes after the announcement of his release from the Burniton Music Group, Kelvynboy is full of praises and worship on Instagram. According to Stonebwoy, after an audit of Kelvynboy’s conduct during his initial one-year agreement which expired on January 22, 2019, the label found no good reason to activate the 4-year extension of the contract option. The label therefore decided to drop him.

However, reacting to the news, Kelvynboy took to his Instagram page to share an old video of him singing some gospel songs.

Earlier this week, a video that showed Kelvynboy asking people to plead with Stonebwoy on his behalf went viral on social media. He knelt down apologizing to his ‘music father’ for all that he had done to him.

However reacting to the said video in an interview with Jessica on Citi FM, Stonebwoy said:

“Kelvyn boy’s apology is just to save his face in Public if you ask me; The people he asked to beg me don’t know me more than him. If he wants to apologize to me, he knows where to find me.”

As it stands, Kelvyn Boy is now an independent artist and anyone who wants to work with him must contact him in person.

Ghanaian actor and entrepreneur, John Dumelo has requested for the funds set aside for the Black Stars, had they qualified to the round of 16 in the FIFA 2022 World Cup, to be used to purchase desks for school kids. END_OF_DOCUMENT_TOKEN_TO_BE_REPLACED

END_OF_DOCUMENT_TOKEN_TO_BE_REPLACED

Accra’s biggest and only photo festival, “Wondaland” is back; this time bigger and better. END_OF_DOCUMENT_TOKEN_TO_BE_REPLACED