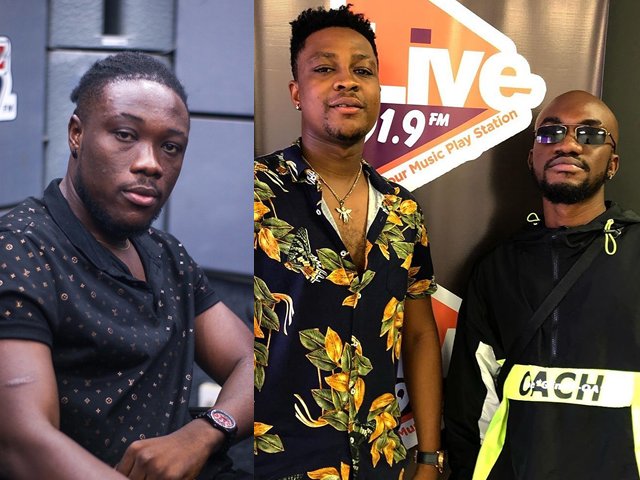 Former Highly Spiritual Music act, Kurl Songs, claims his former label mates have taken a song he is still working on in the studio, recorded their version and have released it.

According to the ‘Jennifer Lomotey’ hitmaker, the song titled ‘Dwɛ’ by Krymi and Mr Drew featuring Sarkodie belongs to him.

Kurl Songx, in an interview with Andy Dosty, on Hitz FM’s Daybreak Hitz, Thursday, said that the boss of Highly Spiritual Music, Kaywa, gave the beat to him to compose the song.

The artiste added that after he had a misunderstanding with Kaywa, the producer allowed his signees, Krymi and Mr Drew copy his melody and create a similar tune.

‘’The ‘Dwɛ’ song is my song. You can call Kaywa and ask. He played the beat and sent it to me….I wrote the song and everybody in the studio said it was a hit so we decided to send it to Shatta Wale. He said he was going to do it [then] little issues started coming,’’ he alleged.

Kurl Songx also accused his former label mates, Krymi and Mr Drew of stealing his melodies and his lyrics.

“The melodies and all, it is me. Diana Asamoah where does Drew know Diana Asamoah? Drew didn’t write the song so where does he know all these things. Kaywa should come and tell me I am lying,’’ he challenged.

The relationship between Kaywa and Kurl Songs became sour after the artiste said on Hitz FM in 2019 that the label didn’t support him enough.

Mr Eazi and girlfriend, Temi Otedola all loved up as they celebrate 3 years of dating

What a time to be an African! On the back of a successful Global Citizen Festival in Accra, and a visit of  Recording Academy CEO, Harvey Mason Jr to Ghana, his first trip to West Africa, it appears that Afrobeats may soon get its individual shine at the Grammys! END_OF_DOCUMENT_TOKEN_TO_BE_REPLACED

The School of Graduate Studies of the University of Professional Studies (UPSA) has honoured Ghanaian musician, Rebecca Acheampong known popularly as Becca for her outstanding academic achievements. END_OF_DOCUMENT_TOKEN_TO_BE_REPLACED

Platinum selling artist, KiDi has reacted to the resurfacing of his old tweets on the social media platform. END_OF_DOCUMENT_TOKEN_TO_BE_REPLACED