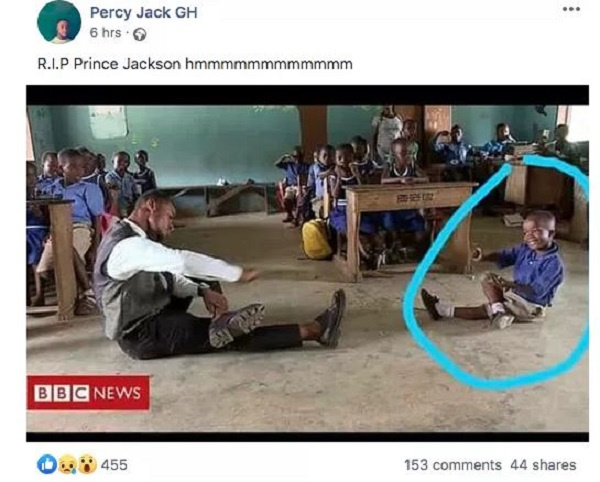 Teacher Percy Jack GH from the viral video which showed he and his students dancing to Medikal’s “Omo Ada” has confirmed the death of his little dance partner, Prince Jackson.
The multi-talented teacher confirmed the sad news via his Facebook page after news of the boys’ death broke yesterday.

“He fell down and no attention was given for 5 days. According to the doctor, it is internal bleeding”. he added.

Celebritiesbuzz.com.gh first broke the news of the little boys’ death. According to them the little boy fell down and hit his head on the floor, his parents thought it wasn’t anything serious so they didn’t bother to take him to the hospital.

Sadly for them, the little boy suffered from internal bleeding which caused his death the website reports.

Viola Davis makes a stunning transformation in the new trailer for ‘The Woman King’, in which she plays Nanisca, leader of the all-female warriors known as the Agojie. END_OF_DOCUMENT_TOKEN_TO_BE_REPLACED

African-American businessman and jet broker Kelvin Mensah, popularly known as PJKev has added his voice to the many people against the building of the National Cathedral. END_OF_DOCUMENT_TOKEN_TO_BE_REPLACED

Nigerian hip-hop artiste, Eedris Abdulkareem has disclosed that he is battling kidney failure and will have a surgical operation at the end of July. END_OF_DOCUMENT_TOKEN_TO_BE_REPLACED

According to reports from Nigeria, unidentified gunmen have attacked an ‘advance team’ of President Buhari’s presidential aides leading to injuries to two people. END_OF_DOCUMENT_TOKEN_TO_BE_REPLACED

Sensational highlife/afrobeat artist KiDi has said that his dream is to collaborate with Daddy Lumba on a song. END_OF_DOCUMENT_TOKEN_TO_BE_REPLACED