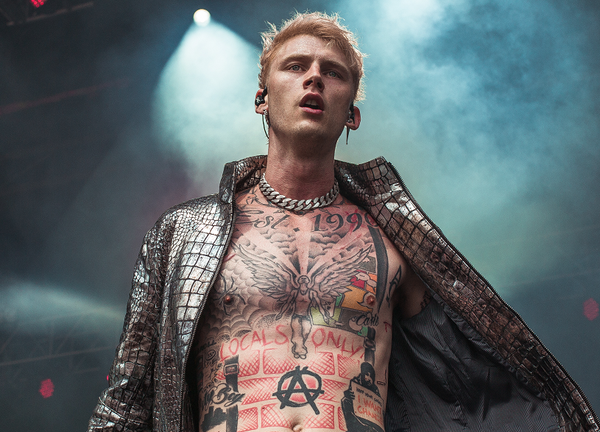 To mark the anniversary, the Cleveland rapper took to Instagram with a celebratory post. He shared a yearbook photo of a girl named Savannah Frank. Underneath the photo was her senior quote: “Rap Devil was better,” a reference to MGK’s diss track being better than Eminem’s “Killshot” diss.

“It’s the ‘Rap Devil’ one year anniversary today…tell it happy birthday,” he captioned the pic.

MGK and Eminem ignited their beef last year with a series of diss tracks. After hearing MGK’s verse on TechN9ne’s “No Reason,” Eminem fired the first round on his Kamikaze cut “NotAlike”

Shortly after, MGK returned fire on “Rap Devil,” inspired by Em’s own 2013 track “Rap God.” “im standing up for not just myself, but my generation. im doing the same shit you did back in ur day,” MGK tweeted at the time. “life is still real on my side, and i had to take time from the grind to defend myself from someone I called an idol.”

That prompted Em to release his scathing response “Killshot” on which he called MGK a “white toothpick” and the “wack” version of him.

MGK claims he had another diss ready, but after hearing “Killshot,” he decided not to release it. “I actually had a clip ready, I heard ‘Killshot’ and I put that shit back in the holster,” he told “The Breakfast Club.” “My track record with beef isn’t Christina Aguilera and Mariah Carey. It’s all gorillas. I’ve went to war with nothing but gangsters, gorillas, and 450-pound security bouncers.”

R. Kelly moved out of solitary confinement to general population while awaiting trial