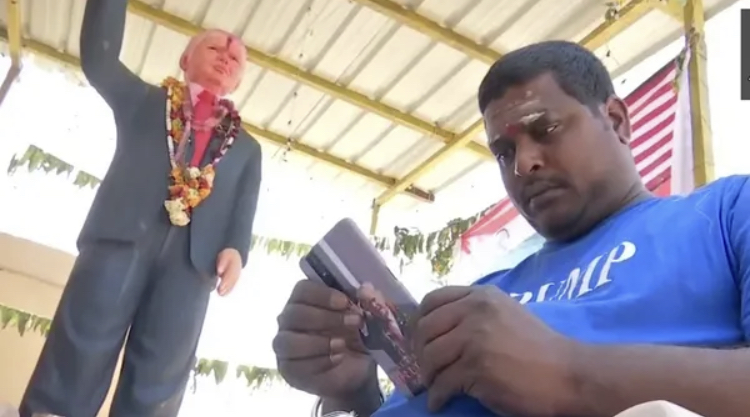 A 38-year-old man from the Indian state of Telangana has died after fasting for four days to pray for Donald Trump’s recovery from Covid-19.

According to his family, Bussa Krishna Raju worshipped the US president like a god, and was shocked and disturbed to find out about his coronavirus diagnosis.

Mr Raju refused food and started praying for Mr Trump’s recovery when he found out about his infection last week. Mr Trump tested positive on Thursday 1 October, and was treated at the Walter Reed Medical Center for several days.

Mr Raju’s family told the Times of India that he collapsed on Sunday while having tea at his relative’s residence in the village of Toopran in Medak district. He was taken to hospital where doctors declared him dead.

India: “He was upset when he learnt about Trump testing positive for coronavirus. He spent sleepless nights, starved and prayed for the US president’s recovery for the past three-four days. He died of cardiac arrest today around noon.”

Mr Raju said at the time that he had been praying for Mr Trump’s re-election, as well as his wellbeing and that of the First Lady Melania Trump. He claimed that even before installing the statue, he was worshipping Trump for over four years.

And in an earlier interview with the Times of India, Mr Raju said that the reason he started worshipping Mr Trump in the first place was that he appeared in his dreams.

Mr Raju had expressed a wish to meet Mr Trump when the president visited India for a rally alongside Narendra Modi in Ahmedabad in February this year. His wish remained unfulfilled, however.

Mr Raju is not the only Indian to show his affection for Mr Trump. In the past the Hindu Sena, a right-wing fringe group, has prepared songs for Mr Trump’s welcome, celebrated his birthday and carried out photo exhibitions where they gave up offerings of cake to a poster of the president.

Hindu Sena members say they support Mr Trump because of his perceived hardline stance on Muslims, and his close relationship with Mr Modi. Hindu Sena also carried out a religious ceremony to pray for Mr Trump’s re-election during his February visit.

EXCLUSIVE: Where Cardi B and Offset Really Stand After Their Steamy Las Vegas Reunion

One of the three men charged in relation to Mac Miller‘s 2018 death from a drug overdose has been sentenced to 17 years and six months in prison. END_OF_DOCUMENT_TOKEN_TO_BE_REPLACED

The 2022 Billboard Music Awards took over the MGM Grand Garden Arena in Las Vegas on Sunday (May 15), with Sean “Diddy” Combs hosting and performing. END_OF_DOCUMENT_TOKEN_TO_BE_REPLACED