President of the Creative Arts Council, Mark Okraku Mantey has officially been selected by President Akufo-Addo for the role as the Deputy Minister of Tourism, Arts and Culture.

Earlier this year, rumors were rife about Mark’s nomination as Deputy Minister with celebrities like Sadiq, Kuami Eugene supporting him. However, Ghanaian dancehall act, Shatta Wale was publicly against his nomination.

In a press release issued by the Communications Directorate of the Office Of the President, the list containing names of persons to be appointed as Deputy Minister in Akufo-Addo’s second term was submitted to the Speaker Of Parliament on Wednesday 21st April 2020 for Parliament approval. 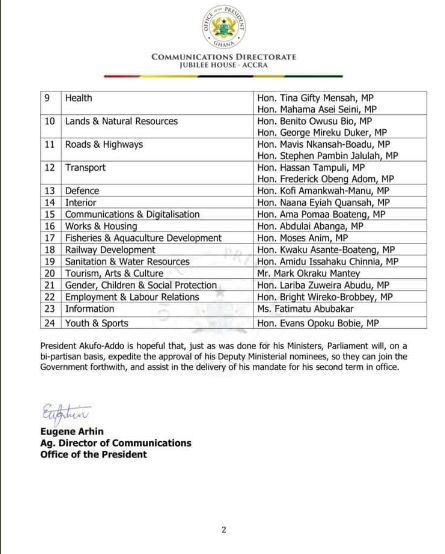 Mark will be deputy to the CEO of Graphic Communications Group, Dr. Ibrahim Mohammed Awal, who was named as Minister Designate for Tourism, Creative Arts and Culture.

The music producer has been in the arts and entertainment business for close to three decades and has been behind practically all the big music hits from the long periods of the ’90s.

Related Topics:Mark Okraku Mantey
Up Next

A Davido, Kelvyn Boy collabo could be on the way. END_OF_DOCUMENT_TOKEN_TO_BE_REPLACED

Eyinatayo Iluyomade, a 19-year-old Lagos-based comedian, has been arrested and charged to court for saying an expensive joke. END_OF_DOCUMENT_TOKEN_TO_BE_REPLACED

Despite the public not being privy to the romantic life of Ghanaian actress Salma Mumin, she has revealed her heart has been broken several times. END_OF_DOCUMENT_TOKEN_TO_BE_REPLACED

The Lioness of Africa, Wiyaala and the King of African Dancehall, Shatta Wale on Saturday, August 13, 2022, rocked the Summer Stage in New York City. END_OF_DOCUMENT_TOKEN_TO_BE_REPLACED

Legendary Ghanaian rapper, Tinny has descended heavily on Stonebwoy and Mercury Quaye over some comments they had made on radio concerning the confiscation of his car. END_OF_DOCUMENT_TOKEN_TO_BE_REPLACED