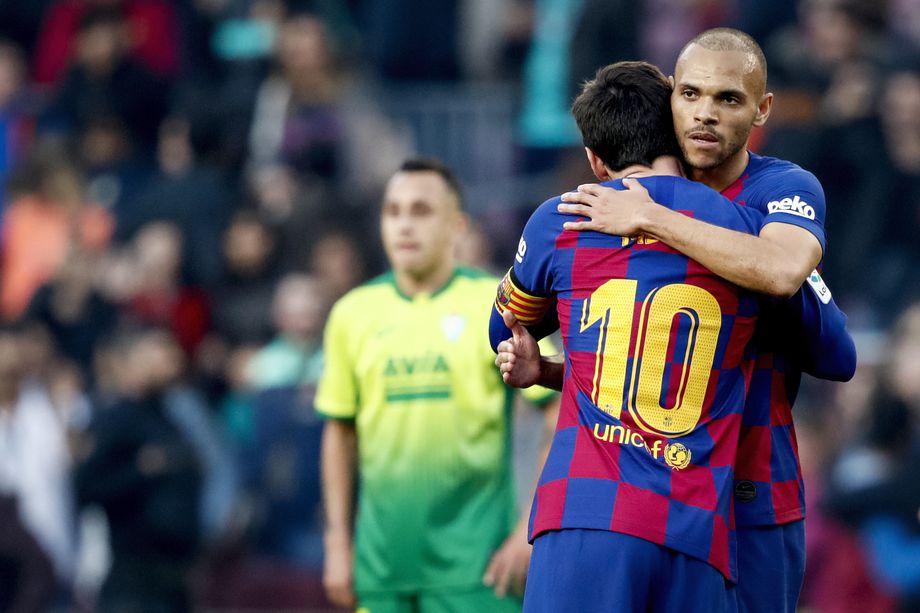 After a difficult week for the club, Barca demolished struggling Eibar 5-0 at Camp Nou, with four-goal Messi in inspirational form as he netted a first-half hat-trick.

Before the match many Barca supporters waved white handkerchiefs towards president Josep Maria Bartomeu and chanted for his resignation after he was forced to deny allegations earlier in the week that the club had hired a firm to “damage the image” of players past and present, including Messi.

Then there was the controversial signing of Martin Braithwaite, who arrived from Leganes as an “emergency” purchase to cover the absence of Ousmane Dembele and seen as an underwhelming acquisition.

But the Denmark international made an immediate impact, having a hand in Messi’s fourth before getting involved in Arthur’s goal that rounded out the scoring.

When asked about what Messi said after helping him score, Braithwaite told reporters: “He congratulated me, he’s a great guy.

“He tried to make me comfortable [after being brought on], he looked for me with his passes. I won’t wash my clothes after the hug he gave me,” he quipped.

“Honestly, I’m very happy to have been able to give him assistance. I felt very well here, surrounded by fantastic players.

“I tried to run and move, which is what I have to do, and the team-mates have found me, so it has been amazing. I am very happy.”

Barca coach Quique Setien was pleasantly surprised by Braithwaite, accepting the forward had more of an impact than anticipated.

“Braithwaite did more than I expected, much more,” he said. “Honestly, he was very good and I think we have got an extraordinary signing.

“He’ll adapt perfectly to what we do, he was involved in two goals and he understands the game so well. He’s powerful and technically very proficient – he’s a worker and has many things that will help us.”

Barca are in action again on Tuesday in the Champions League against Napoli, before returning to LaLiga action against Real Madrid next Sunday.

Related Topics:Martin Braithwaite
Up Next

Lizzo Named Entertainer of the Year at 2020 NAACP Image Awards

Governor of New Jersey announces he has a kidney tumour