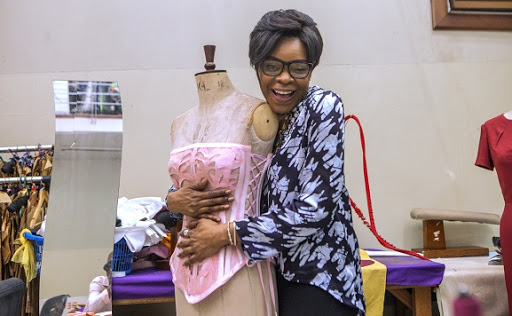 The African continent is gradually becoming one of the biggest and leading fashion markets in the world, along with Europe and the Americas. For decades, throughout the vast majority of the 20th century, the fashion industry had been critically dominated by the Western brands and big names of which everyone had heard of. However, the reality is now changing as the fashion principles, beauty standards, and the cause of the sector change altogether.

Unlike the vast majority of the western world, the African continent and its fashion have not gone under globalization as much. Therefore, the fashion industry in the region remains highly impacted by the traditions and the culture of ancient civilizations. It is evident in everything from colors to shapes and the expression of clothing items. Those bright tones and expressive silhouettes are what attract so many people from all over the world. There now is unprecedented demand for African fashion and the global capitals of design are keeping up with the trend.

Since 2011, the United Kingdom has hosted the annual African fashion week in London. It is the largest and the most prominent Africa-focused fashion event held outside of the continent. Its main aim is to promote African culture, fashion, and design among the larger public and the global influencers that are often based in London. Besides the purely fashion-oriented goals, the fashion week has also managed to contribute to a range of activities and social awareness campaigns. Notably, the Mayor of London Sadiq Khan’s black history month celebrations were heavily supported by the African Fashion Week in London.

The trend has found its place in a range of industries. Companies that work with international companies and operate in multiple nations have found success in bringing African fashion to certain audiences. Notably, the leading gambling operator Playamo, which is present in multiple nations, has decided to introduce African design elements on its websites. The effort has paid off and the users with African origin are extremely thankful for cultural sensitivity and the company’s effort to raise awareness regarding the topic.

Big companies are now interested in the African fashion industry as well. Therefore, what is left to make it a big thing globally? When will we see the name of Nairobi, Johannesburg, or Addis Ababa among the top fashion destinations in the world? Is there a long way to go? The answer is not very precise as fashion is a dynamically developing and changing sector. Fashion hotspots can emerge within a few years and become of global significance. The Georgian capital of Tbilisi is a fine example as it managed to transform into a truly global fashion destination. The city now hosts numerous fashion shows annually, attracting the attention of international media and the general public.

In the end, every important process of changing the region depends on individuals. Fashion designers that create clothing pieces and showcase them to the world are truly bringing the African culture closer to the rest of the world. It is because of such talented individuals that global icons, such as Michele Obama, have worn and openly discussed the African fashion trend. But who are up and coming African fashion designers? What are their influences and achievements?

Art comes without any limitations and that is what makes this field so interesting to explore. The South African fashion designer Sindiso Khumalo has never wanted to be in this field. Instead, she aimed to become a famous architect, designing buildings and different structures all around the world. However, even after studying architecture for years, she has decided to pursue a career in fashion. Suddenly, Khumalo herself along with those around found that combining fashion with the vast architectural knowledge is simply amazing. Her skills and experience in designing buildings brought something special to the fashion world.

Khumalo’s clothing items are full of bright colors and modern silhouettes. Many compare her style to the architecture of the late Iraqi-born British designer Zaha Hadid’s architecture. It is extremely contemporary and is aimed at women who want to stand out from the crowd. The designer herself believes that she designs items for brave and successful women, who are able to overcome obstacles on a daily basis.

Her works have been showcased in some of the leading fashion magazines and festivals globally. She often visits Paris, London, and New York and has been featured in the Vogue editions of Italy and the United Kingdom.

The high-end fashion has arrived in Africa. More luxury and exclusive brands are present in the African market than ever before. Mr. Taibo Bacar is now regarded as the creator of one of the finest fashion brands on the continent. Being a male designer from Mozambique, he had to overcome quite a few obstacles to pave his way towards the success and the top tier fashion industry.

He has shown his designs at African shows like the Johannesburg fashion week and the African International Fashion show. He is well known not only on the continent but also in Europe. He is one of the only few African designers that had an opportunity to display their work at the Milan fashion week, one of the most celebrated fashion events on the globe.

She is one of the finest and most celebrated fashion designers of not only Nigeria but the entire continent. Sagoe started her career in 1989 but just like it happens with many others in the industry, she earned her degree in another field. She studied finance and accounting at two leading universities, the University of Lagos and the University of Miami. Later on, she decided to pursue a career in fashion, becoming one of the highest-earning and famous designers of Africa. She runs her very own fashion house which sells clothing pieces all around the globe. 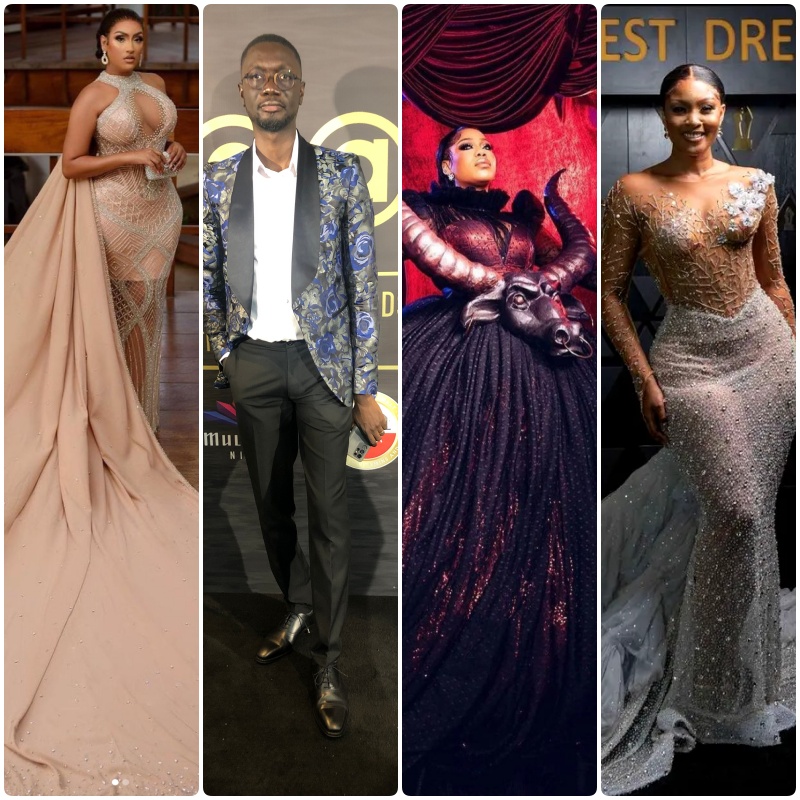 The 8th Africa Magic Viewers’ Choice Awards (AMVCA) went down last Saturday night, at the Eko Hotel and Suites, Victoria Island, Lagos, and it was celebration of haute couture of Africa.

It was a gallery of fashion art as movie people across Africa showed up in style, in different forms of fashion expressions.

From the mesmerizing to the captivating, and everything in-between, it was a night of fashion explosion.

Below are photos of your favourites at the AMVCA 2022

MzVee Cuts Off Her Hair; New Look Outdoored At VGMAs The afrobeats singer shocked patrons when she got onto the red carpet in a low-cut hairstyle, drawing the attention of the cameras.

MzVee after breaking to fame some ten (10) years ago had the nickname ‘Natural Girl’ due to her admirable natural hair and her advocacy for girls across the country to stay true to themselves and as natural as possible.

But a decade down the line, the singer has seen it necessary to rebrand and champion the course from a different perspective.

She will be celebrating her 30th birthday and 10th year anniversary as a professional musician in a couple of months.

MzVee bagged two nominations at the VGMA but was unable to take home any of the plaques after a fruitful 2021.

Taking to her Instagram page to outdoor the new look, she posted a picture of herself with the caption “Fully clothed in his grace.. very excited for #TheNextChapter #10yearAnniversary #30 in June ✨”

MzVee had earlier revealed in Instagram Live interview with Dhamie Offishal (Senanu Damilola Wemakor} that her 6th studio album will be ready on her birthday on June 23. She is also set to hold her 10 years anniversary on June 30.

Hit or Miss? What the stars wore to the 2022 Ghana Music Awards 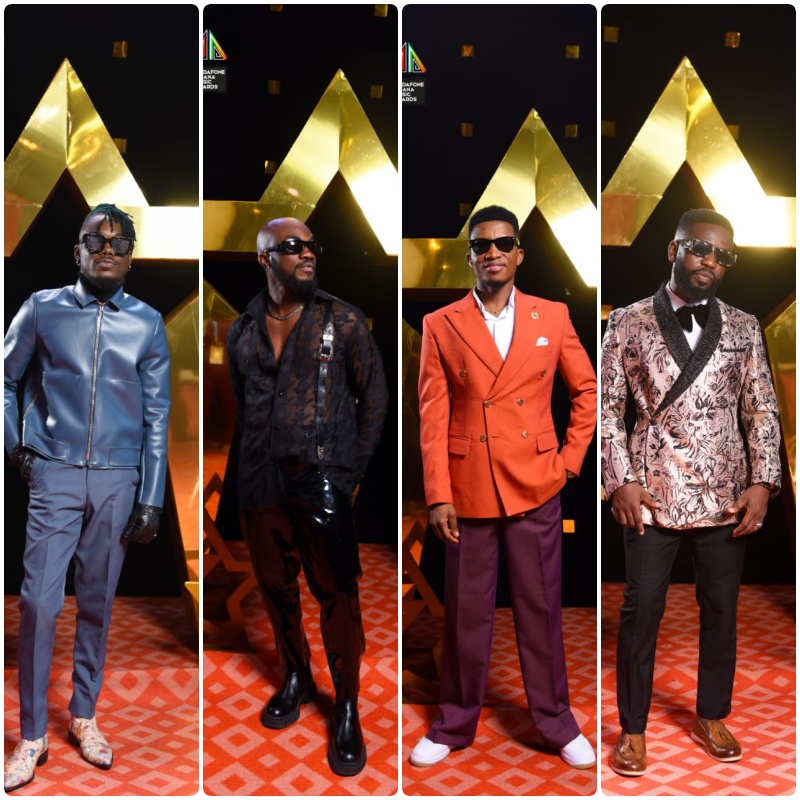 The 2022 Vodafone Ghana Music Awards finale came off at the Grand Arena of the Accra International Conference Centre, on Saturday night with Kidi topping the night. END_OF_DOCUMENT_TOKEN_TO_BE_REPLACED 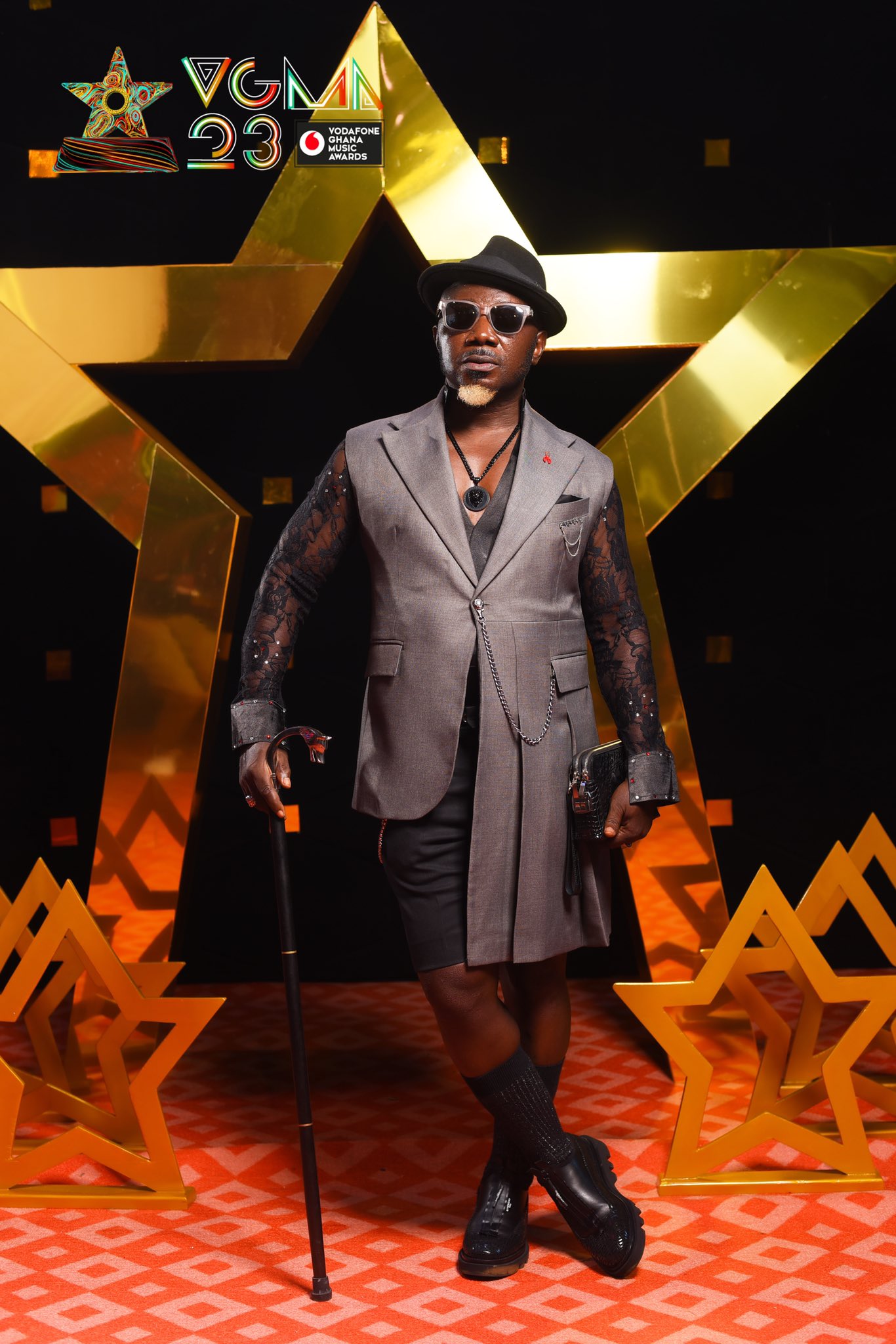 Richard Opoku, widely known as Osebo turned up to the 2022 Vodafone Ghana Music Awards with his usual eccentric fashion sense.  He wore a jacket over a pair of shorts and rocked black boots to complete the fierce look.

Osebo has rapidly risen to fame in Ghana as a result of his out of the ordinary fashion sense and style. He has been intensely criticized by most Ghanaians for the way he fused western culture into that of Africans in his fashion looks.

The 2022 Vodafone Ghana Music Awards kicked off on Friday evening with the Industry Awards night,   at the Grand Arena of the Accra International Conference.

A majority of the awards was focused on the technical categories. The big awards will be presented on tonight, Saturday, May 7, 2022 at the the same venue. 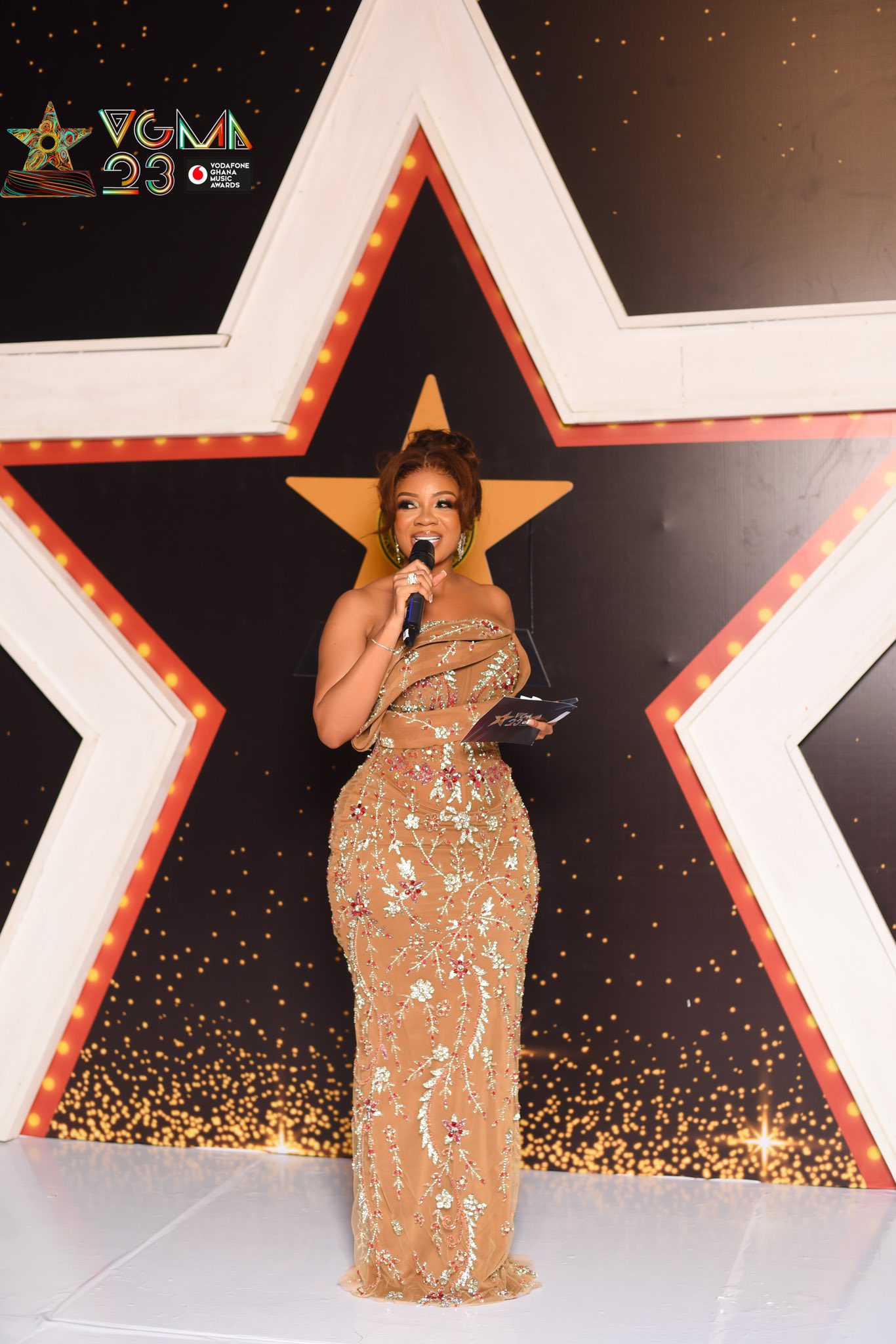 Serwaa Amihere turned out in style to the 23rd edition of the annual Ghana Music Awards, headlined by Vodafone.

The GH One TV host who is performing the duties as Red Carpet host alongside James Gardiner, made sure she turned head in her red dress.

The 2022 Vodafone Ghana Music Awards kicked off on Friday evening with the Industry Awards night,   at the Grand Arena of the Accra International Conference.

A majority of the awards was focused on the technical categories. The big awards will be presented on tonight, Saturday, May 7, 2022 at the the same venue. 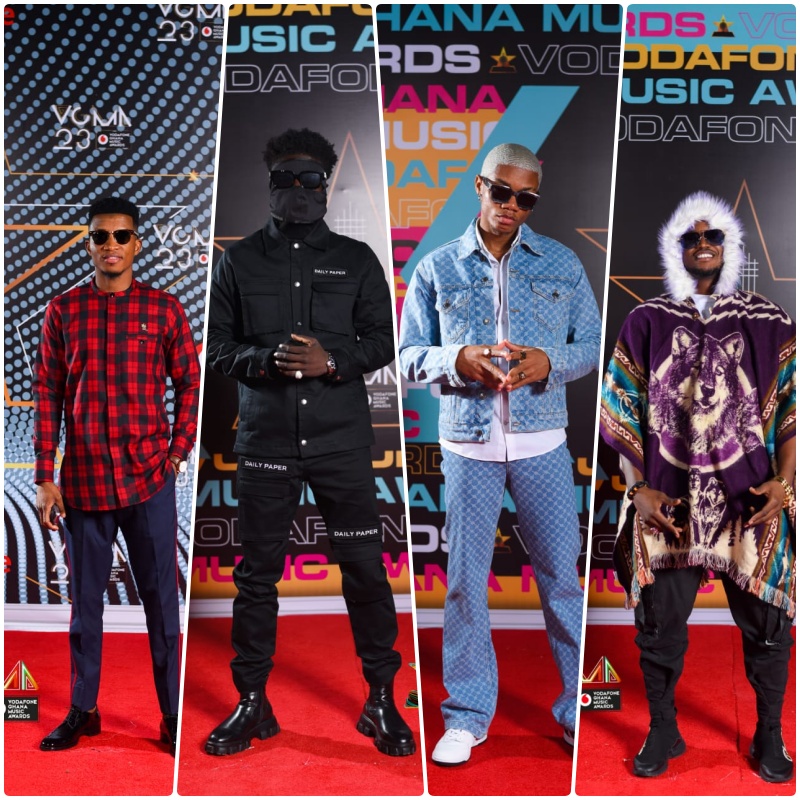 The 23rd edition of the annual Ghana Music Awards, headlined by Vodafone, kicked off on Friday evening with the Industry Awards night, at the Grand Arena of the Accra International Conference. END_OF_DOCUMENT_TOKEN_TO_BE_REPLACED