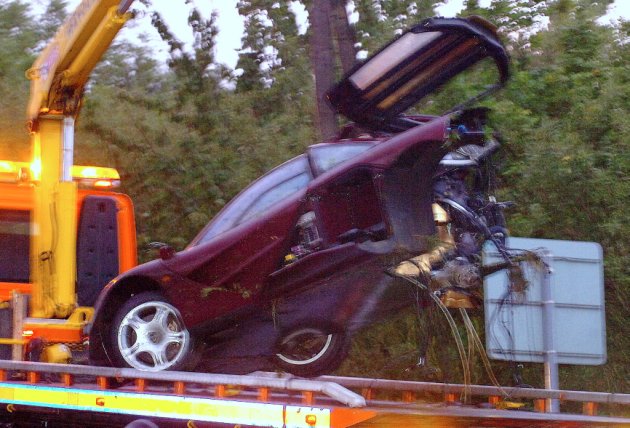 We may grumble about our premiums, but sometimes something happens that might even make you feel sorry for insurers. For example, the people covering one of Rowan Atkinson’s cars have just forked out a staggering £900,000 to fix it – the biggest repair bill in British history.

Atkinson, 58, suffered a shoulder injury in 2011 when he crashed his beloved McLaren F1 for the second time, but it wasn’t the medical expenses that did the damage. While the comic recovered quickly, his 240mph supercar spent more than a year in the hands of McLaren’s expert technicians in Woking, Surrey. The result was a £910,000 repair bill for a car which Atkinson paid £640,000 for in 1997 – making the bill three times bigger than the most expensive repair claim previously documented, a £300,000 claim paid by Aviva to fix a crashed Pagani Zonda in 2010.

Rowan Atkinson. Image: SWNSAtkinson, worth a reported £71 million, hit a slippery patch of road near Peterborough in August 2011, he lost control of the F1 and hit a tree – leaving the car’s 6.1-litre engine 20-yards away from the rest of the vehicle. It was the second time Atkinson had crashed his F1, with the actor front-ending it into a Rover Metro in 1999.

Although http://www.moneyexpert.com/van-insurance/ has good advice on some insurance for vans, technicians at McLaren Special Operations spent four weeks calculating how much the car would cost to repair, with the figure standing at £910,000. The job was given the go-ahead by the insurance company because the F1’s value has soared, with one immaculate model selling for £3.5 million last year. Now, 16-months after the accident, Atkinson is back on the road in the car and wants to continue to use it as regularly as possible and not keep it hidden away.

The star’s full experience is documented in this month’s ‘Classic and Sports Car’ where he explained getting behind the wheel after more than a year was like “putting a familiar sweater on”. He told the magazine: “I’m not a collector. I don’t like the toy cupboard syndrome that causes so many good cars to evaporate. “It depresses me that they are hidden away like investment art, or gold ingots in a Swiss vault. “The McLaren is just so usable, it is a crime not to use it. No gritted teeth, you just get in and drive.”