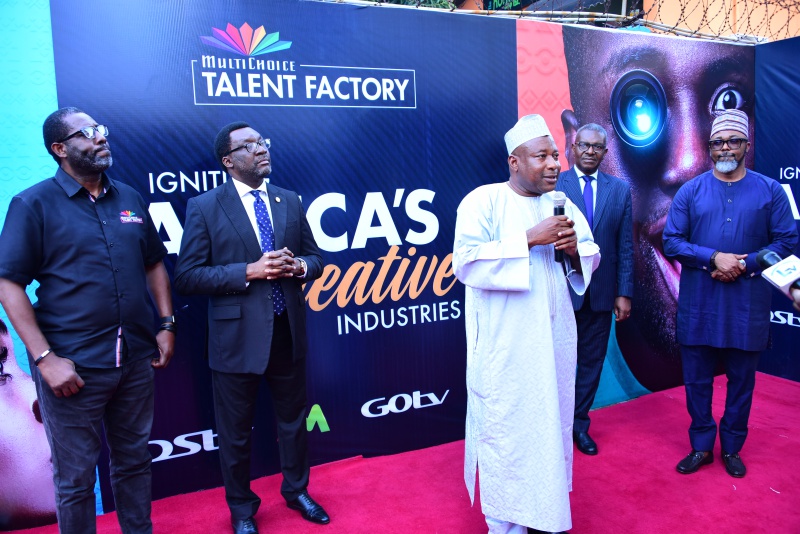 MultiChoice Talent Factory Opens West Africa Academy[/caption] The West African Academy of MultiChoice Talent Factory (MTF), was officially opened in Lagos by the Deputy Minister of Tourism, Arts and Culture, Dr. Ziblim Barri Iddi and the Lagos State Commissioner of Tourism, Arts and Culture, Mr. Steve Ayorinde earlier this week. The MTF Academy is expected to provide Africa’s next generation of film and television storytellers from Ghana and Nigeria with a 12-month training programme. Speaking at the launch Dr. Ziblim Barri Iddi was full of commendation for Multichoice, lauding the company for giving young African filmmakers across the continent an opportunity to understand the business of film production and the opportunity to enhance their skills; “Our founding fathers saw the importance of film and television  as a key tool for shaping the African narrative and thus laid the foundation for this sector to be an integral part of our growth agenda.” He charged the students to take full advantage of the opportunity given them over the next year. Turning to the Ghanaian four he said, “the Ghanaian film industry requires highly skilled professionals with a keen eye for business to further open up our economy, and with an initiative like this I am confident you will return fully equipped to contribute to revitalizing filmmaking in Ghana.” Whilst interacting with the media, Dr. Ziblim Barri Iddi added “the time for African governments to empower filmmakers across the continent is now; we need to support the sector more, as Nollywood has proven the industry is a sustainable foreign exchange earner.” The MTF Academy will give the 20 students from Ghana and Nigeria the opportunity to hone their creative skills, thereby increasing the pool of world-class talent within the industry. It also will teach them the business side of film and television said Femi Odugbemi, West Africa Academy Director, MTF.  “We will be providing them with the skillset to ignite their passion, connect with industry professionals and tell authentic African stories through a comprehensive curriculum comprising theoretical knowledge and hands-on experience in cinematography, editing, audio production and storytelling” he added. As Academy Director, “I will be preparing these candidates as future business owners who will in turn, play their part in building the economy around the industry. It’s time that we not only reap the rewards of high-end quality TV and film products, but we also equally benefit from the investments behind the lens.” In attendance were members of the academia from the Pan Atlantic University who are partners of the MTF, industry stakeholders, reps from MultiChoice Africa as well as the media, who joined in the ribbon cutting ceremony, which was followed a tour of the Lagos-based academy facilities.]]>