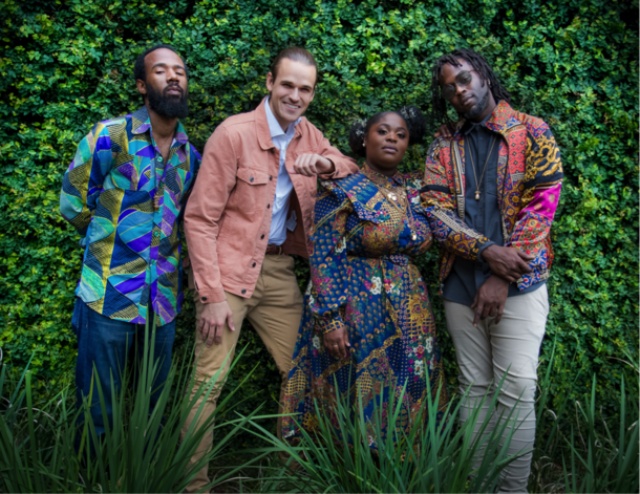 Capping off a monumental year that included a Grammy nomination for “Best New Artist,” breakout band Tank and The Bangas release the music video for their song “Dope Girl Magic”.
The track is taken from their latest album, Green Balloon, which continues to receive critical praise.

Additionally, the band’s debut performance on “Austin City Limits” will air on PBS this Saturday, January 25 as part of their 45th season. Fans can check their local PBS listings for air dates and times in their area, which varies across the United States: acltv.com/watch/tv-schedule/.

The group continues to take their lauded live show on the road this year with an upcoming extensive run of dates supporting The Revivalists. The run of shows includes stops at New York’s Radio City Music Hall, D.C.’s The Anthem, Detroit’s Fillmore, Chicago’s AragonBallroom and more. See below for complete tour dates.

Tank and The Bangas unanimously won NPR’s Tiny Desk contest with “Quick,” a riotous single they released in 2017, about which Bob Boilen proclaimed, “This band combines R&B with hip-hop’s poetry and rollercoaster storytelling, with a flair and alchemy that could only come from New Orleans.”
Since 2017 the band has toured non-stop, selling out venues both stateside and abroad including festival appearances at Coachella, Bonnaroo, Newport Folk Festival and more. The band was included on Rolling Stone’s list of the “10 Artists You Need To Know,” calling them, “A secular church experience, with freewheeling improvisational chops and positive vibes,” while lead-singer and frontwoman Tarriona “Tank” Ball was featured in the September, 2019 issue of Vogue and the November, 2019 issue of Essence.
Tank and The Bangas are Ball, Norman Spence (bass), Joshua Johnson (drums) and Albert Allenback (alto saxophone, flute).
Related Topics:Tank and The Bangas
Up Next

Videos have emerged of the moment a Russian ice hockey star who signed a million-dollar contract with an American team was rounded up by Russian policemen and taken to an army enlistment office before he is sent to fight in the war in Ukraine. END_OF_DOCUMENT_TOKEN_TO_BE_REPLACED

A woman who flashed a gun before attempting to make her way into Diddy’s BET after-party was arrested outside the mogul’s house. END_OF_DOCUMENT_TOKEN_TO_BE_REPLACED

Andy Goram has died at the age of 58 after a short battle with cancer. END_OF_DOCUMENT_TOKEN_TO_BE_REPLACED

A woman who went viral 2 years ago for marrying the man who caught the garter after she caught the bouquet at their friends’ wedding, has shared an update on their marriage. END_OF_DOCUMENT_TOKEN_TO_BE_REPLACED

Liverpool star, Mohamed Salah has committed his future by signing the biggest deal in the club’s history. END_OF_DOCUMENT_TOKEN_TO_BE_REPLACED