Actress Yvonne Nelson in responding to comments on Twitter has revealed some information about the father of her daughter Ryn Roberts.

Out of the blue, the actress tweeted “Know your worth” and it sparked an outrage on the microblogging platform. Some fans believed her tweet was a shade to the celebrities who were caught in the Cardi B “meet and greet” brouhaha.

One Twitter user replied her saying that “know ur worth. So ur worth is having a baby for a married ma? Wo tw* wai” and it went viral. 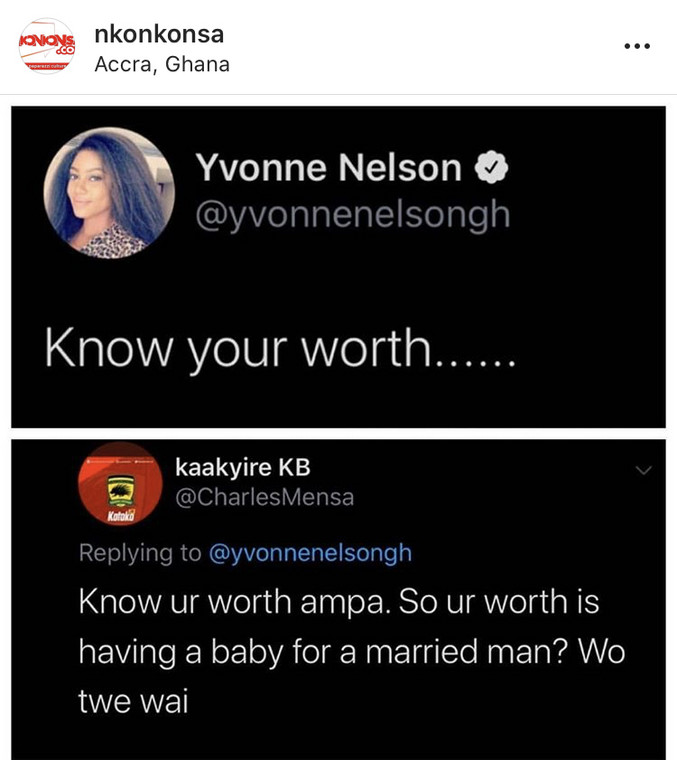 Ghanaian blog Nkonkonsa shared the screenshot on his platform which attracted a number of derogatory comments from followers of the blog. Some of these comments angered Yvonne Nelson and she headed to Twitter to curse them.

Yvonne seized the moment to clear reports that she got pregnant for a married man. “I’ll make this clear today! James Roberts, Ryn’s dad was divorced when i met him,(you can interview him) his ex wife isnt the mother of his 2 kids! And yes he’s an AMAZING dad to ryn and his two kids!”

Started blocking! I need blocks for my water front! Say something dumb and get it! Fast and hot!

The dumb charles in kokonsah’s post, you are CURSED for life! Mark my words! Never bring my baby(daughter) into anything negative! God punish you! Ive given you all the publicity you want! Enjoy it.

Kwesi Arthur to shut down Kumasi on December 22

Chris Fonye popularly known as “Hydraulix Fonye” is a Ghanaian producer, sound engineer, songwriter and singer with a vast experience in the Ghanaian entertainment industry. END_OF_DOCUMENT_TOKEN_TO_BE_REPLACED

Although there may be hundreds of afro-beats artists in the country, Highly Spiritual Music signee, Lasmid believes he is unique. END_OF_DOCUMENT_TOKEN_TO_BE_REPLACED

Highly Spiritual Music signee, Lasmid, has stated that he wasn’t expecting his song “Friday night” to reach such great heights within a short time frame. END_OF_DOCUMENT_TOKEN_TO_BE_REPLACED

The 2023 African Cup of Nations, AFCON initially scheduled for Côte d’Ivoire next June will now be held in January and February 2024 due to the concerns over the rainy season in the country. END_OF_DOCUMENT_TOKEN_TO_BE_REPLACED