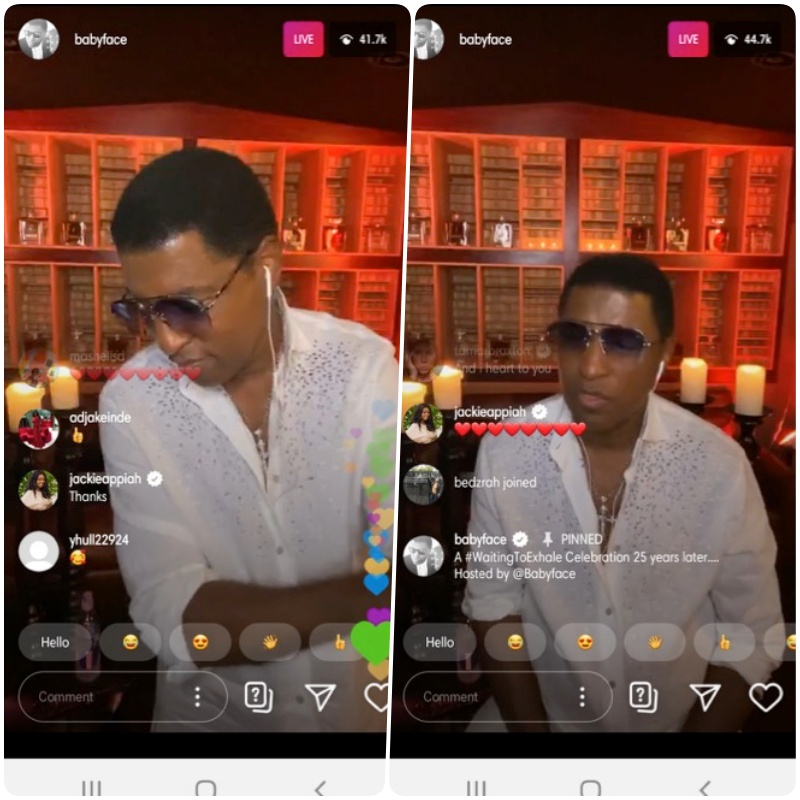 Not enough twilights, sandcastles nor charms could stop almost 50K “Instagramers” from drooling and savoring over Multiple Grammy Award winning singer, producer, and songwriter Kenneth “Babyface” Edmonds’ via his special Instagram Live presentation on May 24, 2020.

The occasion was the 25th anniversary of the Soundtrack to the award-winning movie “Waiting to Exhale”. (1995)

Ms. Jackie Appiah remained captivated and interactive throughout the entire broadcast lasting almost Two hours with comments and emojis expressing her emotions and admiration for the melodious tunes of the Soundtrack that defined her generation in the 90s.

Some of her comments can be seen on the screenshots captured by Ameyawdebrah Media include,  Ghana Flags, multiple heart emojis, applause Dancing queen etc…..

What could be the connection here? Curious minds may ask, Jackie Appiah obviously became a household name in Ghana in the 90s and her nostalgia for the genre of Babyface’s music is an affirmation our favorite Actress and Philanthropist has eclectic taste and continues to mesmerize her fans and admirers about her taste and preferences for the finest things in life including great music.

It is undeniable that an appreciation for talent & craft as such exhibited in WAITING TO EXHALE movie & soundtrack makes you appreciate Creative Arts Industry  has the capacity to transcend cultures when it is harnessed effectively as cultural, economic, and educational tool.

We always knew talented performers like Ms. Jackie Appiah could have been much bigger “STARS” beyond Ghana if and only if the Creative Arts Industry was given the necessary impetus for development in Ghana. (That’s another story for another time).

The observation from the Broadcast on Instagram is simply revelatory that our beloved Jackie Appiah was whisked by Babyface Edmonds into nostalgia for her teenage and young adult years in the 1990s.

Maybe one day Ms. Jackie Appiah will grant us an in-depth insight to her life experiences in the 90s and hopefully take us all on a memory lane into her eclectic taste in everything and all things 90s including, Music, Fashion and Movies. (Hopefully)

For the young fans wondering what the fuss is about? The movie Waiting to Exhale, is a 90s Cult Classic, a Cultural Groundbreaking and Empowering Storytelling portrayed on Screen by legendary Actresses including, Angela Bassett, Whitney Houston, Loretta Devine, Lela Rochon and with one of the best-selling Movie Soundtrack Albums produced by Kenneth “Babyface” Edmonds.

We appreciate Ms. Jackie Appiah for letting us experience another hidden passion of hers; 90s Music and her love for “Babyface”.

If you know you know! 1990s was incomparable decade to live in and live through. So much greatness. Bring-back the 90s.

Related Topics:babyface and jackie appiah
Up Next