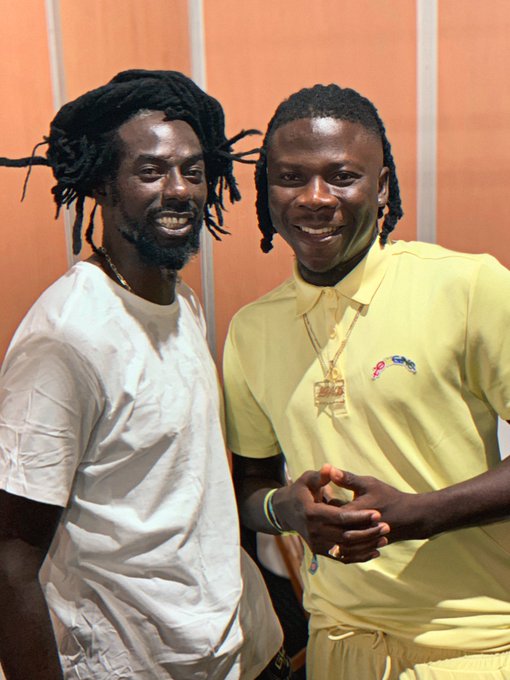 Dancehall artiste Stonebwoy has downplayed any negative effect a collaboration with Buju Banton may have on his brand.

According to him, the fact that the Jamaican reggae legend has been to prison means nothing.

It emerged over the weekend that Stonebwoy has recorded a song with Buju Banton.

Stonebwoy met the reggae music legend during a performance at the Afro Nation Festival in Faro, Portugal last week.

Born Mark Anthony Myrie, Buju Banton was in December 2018 released from jail after serving eight years of a ten-year sentence.

Reacting to concerns that Buju’s reputation as an ex-convict may affect his brand, Stonebwoy told Andy Dosty in an interview on Daybreak Hitz on Hitz FM that he is not worried about that.

“We all go court aaaa,” he said and added that, “This ex-convict came out of prison wey edey fill the stadium,” referring to the reggae star’s Long Walk to Freedom concert which had about 35,000 people in attendance in March.

He believes that the West understands these things and that “If people didn’t [make] mistakes, there wouldn’t be cells.”

The ‘Tuff Seed’ hit singer explained that it does not really matter if the person is an ex-convict, especially when there is no ban on the person.

Stonebwoy is currently on his ‘Shuga Sumer Tour’ which has seen him perform Stonebwoy in 5 countries (Austria, The Netherlands, Sweden, Portugal and Germany) in 8 days.

Watch: KiDi reveals one thing that makes him happy

The 2023 African Cup of Nations, AFCON initially scheduled for Côte d’Ivoire next June will now be held in January and February 2024 due to the concerns over the rainy season in the country. END_OF_DOCUMENT_TOKEN_TO_BE_REPLACED

Bose Ogulu has told her son Burna Boy to “tone down the madness” as she celebrated his birthday. END_OF_DOCUMENT_TOKEN_TO_BE_REPLACED

The Hewale Lala (Song Of strength) hit maker Perez Musik gets ready to have his first-ever major concert. END_OF_DOCUMENT_TOKEN_TO_BE_REPLACED