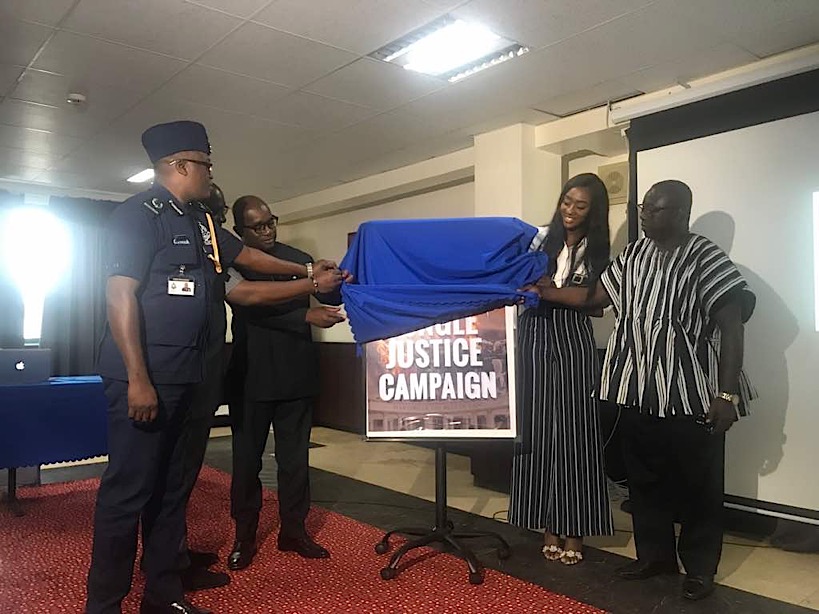 Actress and radio/TV presenter Regina Van Helvert has officially launched her campaign against mob action in Ghana, dubbed  ‘Jungle in Justice’ on Friday, 24th August which was held at Alisa Hotel in Accra. The ‘Heels and Sneakers’ actress bewailed that its time Ghanaians are well educated when it comes to crime in the society because it is not legal for an individual to take one’s life. Regina also explained the procedures which would guide her probe the issue of ‘mob action’ in the country that is she would start the campaign with the hashtag #stopjunglejustice on all social platforms. According to her, a lot of the Ghanaian youth mostly spend their time on social media hence using the hashtag would get the attention of the youth in order for them to join in the campaign. ‘’ The are various ways we would like to talk to people about Jungle Justice and one is to trend with the hashtag. This is because a lot of young people are active on social media and in order to do so, we are going to use Facebook, Twitter, Instagram, Snapchat and various interactions to promote the jungle justice. We would ask people whether they have experienced it before and get resource people who can answer a few questions” she maintained The actress also noted that programs would be held in various regions in Ghana according to their schedules, therefore, making the campaign not just identified in Accra but to other Districts as well like Ashanti Region, Eastern, others. She also promised that Ghanaians should expect more from her team because, with the aid of the police and the Arm forces, she believes that they would be able to minimise the rate of mob action and also use the various platforms to educate Ghanaians of the need to report a crime rather than them taking the law into their own hands. Regina urged all stakeholders, the media, and law execution department to support her on this operation in order to save innocent souls. Captain Dennis Mahama, the father of the late Major Maxwell Adam Mahama, has endorsed the campaign by indicating his support for the project during the launch because he feels it time Ghanaians are cultured on the mob justice issue. The event was beautifully graced by dignitaries in politics, actresses, and colleagues from the media. Van Helvert as part of her campaign on mob action showed a synopsis of the movie that took the life of a young teenager who was living unrefined lifestyle in the community and was scorched to ashes by his people for stealing. The educative movie had the likes of John Dumelo, Yvonne Nelson, Peter, and Striker of ‘Beast of No Nation’ of which captures the idea behind the campaign. Jungle Justice was produced by Award Winning Actress Regina Van Helvert and Idowu Okeniy.]]>

Exporting Ghanaian music to Nigeria, an exercise in futility? The case of the Menzgold & Zylofon Media Nigeria launch concert

The Hewale Lala (Song Of strength) hit maker Perez Musik gets ready to have his first-ever major concert. END_OF_DOCUMENT_TOKEN_TO_BE_REPLACED

Kofi Sonny, CEO of 610Music, a direct representative for Universal Music Group in Africa, unveiled two of his newly signed artistes to the world over the weekend. The event pulled in dignitaries from all over the globe to witness what many have dubbed “the birth of greatness.” END_OF_DOCUMENT_TOKEN_TO_BE_REPLACED

GuiltyBeatz is ringing in the summer! The Grammy-nominated Ghanaian producer and DJ is back with another dazzling solo effort – an Amapiano-infused dance anthem ‘Universe’ featuring Pop sensation, Mr Hudson and buzzing Ghanaian singer, Twitch 4EVA. END_OF_DOCUMENT_TOKEN_TO_BE_REPLACED

The host of Joy FM’s Strong and Sassy, Animwaa Anim-Addo, has tied the knot in a private ceremony. END_OF_DOCUMENT_TOKEN_TO_BE_REPLACED

Grammy award-winning Nigerian musician, Burna Boy is trending on Twitter over his choice of outfit at a recent concert. END_OF_DOCUMENT_TOKEN_TO_BE_REPLACED