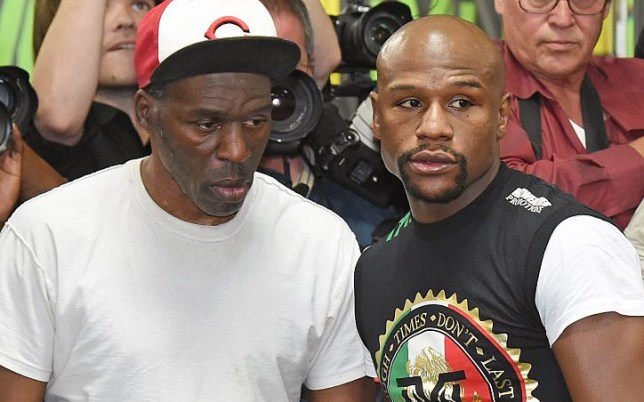 Legendary boxing trainer Roger Mayweather has passed away at the age of 58, Floyd Mayweather’s camp have confirmed.

The American, Floyd’s uncle, was heavily involved in Mayweather Jr’s training team following his own boxing career. Roger was considered the finest trainer of his generation and Floyd attributes his glittering career to his uncle’s lessons in discipline.

The cause of death was unconfirmed but Roger had been in declining health over the last decade and Floyd attributed his deterioration to the after-effects of his boxing career, where he had a record of 59-13, with 35 knockouts.

‘My uncle Roger Mayweather has lost a lot of memory from the sport of boxing,’ Floyd said in an interview in 2015. ‘He’s only in his 50s, but it seems like he’s an old man in his 80s.’

The 58-year-old had been a professional boxer until 1999, when he retired as a 37-year-old. He was a two-weight champion during an impressive career, holding the lineal super featherweight and WBA titles for two years across 1987 to 1989.

Roger trained Floyd for the first two years of his career and helped him become professional in 1996. Roger stepped down once for a period of two years as Floyd’s father took over, but he returned in 2000 and served under the legendary boxer for a further 12 years.

However, Roger’s health problems were evident in 2016 when he went missing for several days in Las Vegas, Nevada.

Oprah Winfrey slams report that she was arrested for sex trafficking

18-year-old North Carolina-based rapper Tino Szn has just shared his new video for “Drowning Out”, a fun and upbeat track off his most recent project Sentient. LISTEN END_OF_DOCUMENT_TOKEN_TO_BE_REPLACED

In a message for International Youth Day, His Royal Highness The Prince of Wales said: END_OF_DOCUMENT_TOKEN_TO_BE_REPLACED