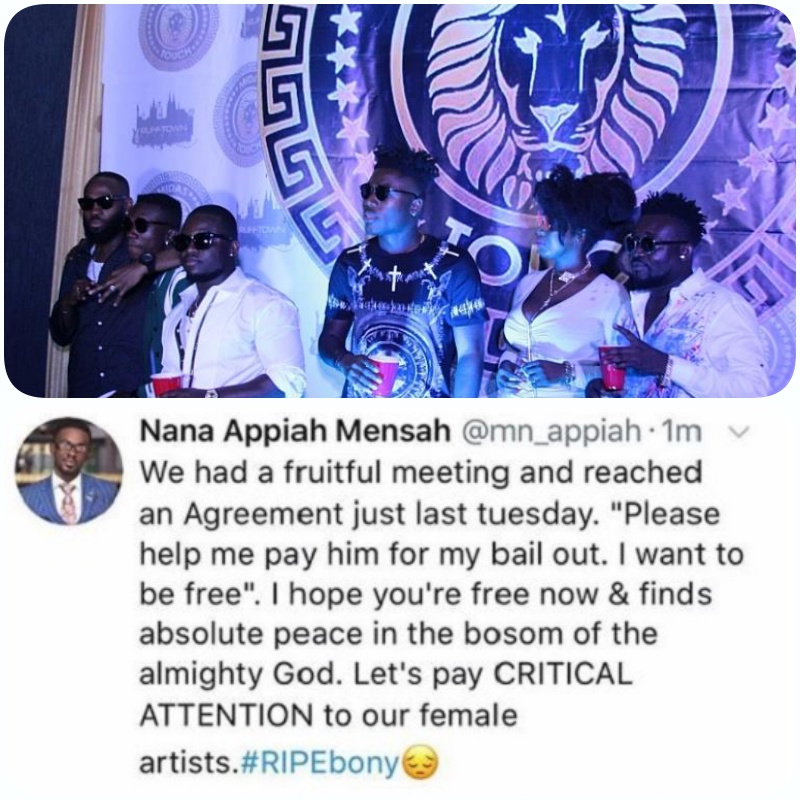 When you are one of the hottest artists in Ghana, everyone wants you!! That was the story of the late dancehall artist, Ebony Reigns, who appeared to be torn between 3 labels at the time of her death. Although it was publicly known that Ebony was signed to Ruff Town records, under the management of singer Bullet of Ruff N Smooth fame, many do not know it was under a partnership with Midas Touch Inc. In fact Midas Touch Inc was responsible for most of the financing for Ebony. Zylofon Music has also been negotiating with Ebony to sign her, and according to sources the talks were completed last week, and Zylofon media was set to soon announce it. This is the reason why Zylofon Media CEO, Nana Appiah Mensah recently tweeted that: “’we had a fruitful meeting and reached an agreement last Tuesday. ‘’please help me pay him for my bail out I want to be free’’ I hope you’re free now and find absolute peace in the bossom of the almighty God. Let’s pay critical attention to our females artistes’’ His comments have since received a lot of backlash with many saying he was insensitive to the demise of Ebony, her family and friends; while others say it was unprofessional of him to have talks with Ebony without involving her ‘established’ management. But what did Nana Mensah mean when he said ‘bail out’? According to sources all was not well with the management for Ebony. Sources say Midas Touch Inc was not happy because they were not getting their investment worth from Ebony. Ebony was canceling paid gigs they had arranged for her (as screenshots have proven that these were out of fears of dying because it had been prophesied by many pastors that she would die in a motor accident). Sources say Ebony also clashed with Midas Touch Inc over the car she wanted the label to buy for her. The source hinted that she wanted a Range Rover, but the label thought that with less than a year to end their contract with her, they couldn’t see how she could ‘pay back’ the full cost for a Range Rover at the pace she was running, i.e. canceling paid gigs etc. The source added that instead of the Range Rover, Midas Touch Inc gave Ebony the jeep, in which she had the car crash, as a temporary car . It belonged to one of the members of Midas Touch Inc. In January 2018, Ruff Town Records in collaboration with MIDAS Touch officially unveiled 3 artistes on their record label as the label promises to change the music industry with these artistes namely, Brella, Ms Forson and Danny Beatz. So what bail out did Ebony ask from Zylofon Media, currently the big money bag in Ghana’s entertainment space? Stay tuned!]]>

Related Topics:ebonyfeaturedmidas touch inc
Up Next

Culture, diversity and empowerment… how the success of Black Panther could impact Africa