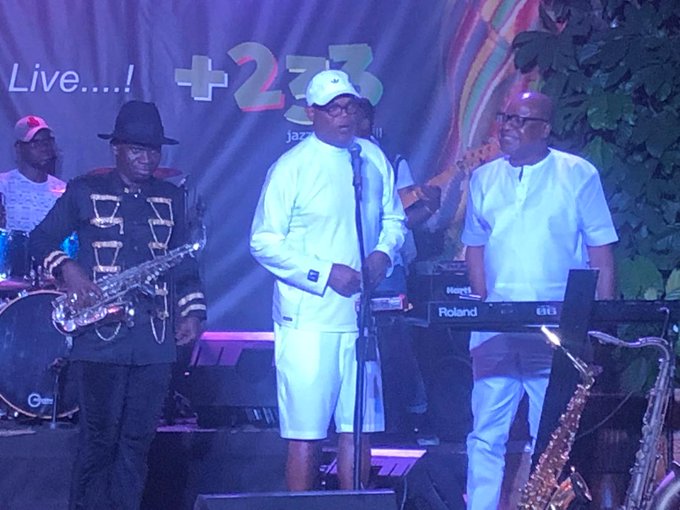 Veteran American actor, Samuel L Jackson who has been visiting West Africa filming a documentary on slavery, has arrived in Ghana.

He was first spotted at the +233 Jazz Bar on Saturday night, giving a speech. The documentary,’ Enslaved’ has since taken to Gabon, where the actor has traced his own ancestry.

Jackson has been sharing his experiences across West Africa so far on social media. Check out a few below:

The ride or die babies & the women handling their biz like always! The dancing babies & the tambourine playing nana were da best!! #homecoming #ghana #enslaveddocumentary

Loving these kids! First group was getting water from the local well & stopped to holla at a brutha. The others were participating in tribal ceremonies. #homecoming #gabon #enslaveddocumentary

When you meet The King of The Benga, your ancestral tribe & he turns out to be your best friend Skeeter!!! When you’re on a journey of discovery & a life choice becomes clear! #homecoming #gabon #enslaveddocumentary

The series will chart the horror of slavery through underwater archaeology. Created by doc outfit Associated, the series is being timed to coincide with the 400-year anniversary since the first African was brought to the New World as a slave.

According to Deadline, Journalist Simcha Jacobovici (The Naked Archaeologist) is in charge of the series, which will retrace the harrowing sea voyage that brought millions of Africans, over hundreds of years, to a life of slavery.

The host of the documentary, Jackson, who is a licensed diver, will we seen going in search of the sunken slave ships that went down with their human cargo.

Related Topics:Samuel L. Jackson in Ghana
Up Next