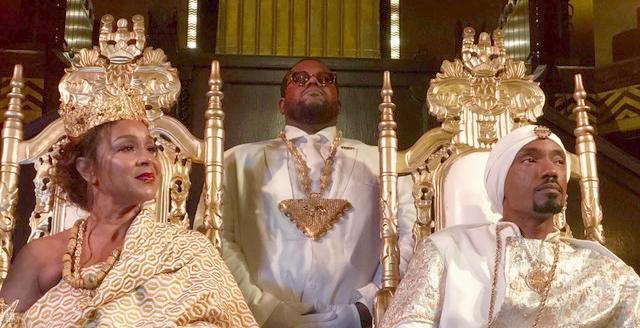 American actress, model and entrepreneur, Lisa Raye McRoy in telling ‘her truth’ in a recent interview on The Wendy William Show, referred to herself as the ‘Queen Mother of Ghana’, which drew a lot of attention from Ghanaians on social media.

American media reported in September that LisaRaye was enstooled as a queen mother of Agona Kwanyanko in the Central region. According to reports, she was named as queen mother because of her humanitarian efforts, and that she was chosen for the role by the ‘paramount chief of Agona Kwanyako, the chiefs, and the entire Kyidom Traditional Divisional Council’.

LisaRaye McCoy’s enstoolment  took place at a glitzy ceremony at the Cicada Club in Downtown Los Angeles, CA. It was attended by some ‘chiefs’  dressed in regal clothes who referred to King Yahweh of the ‘beautiful Kingdom of Yahweh’ as the one that made it all possible. 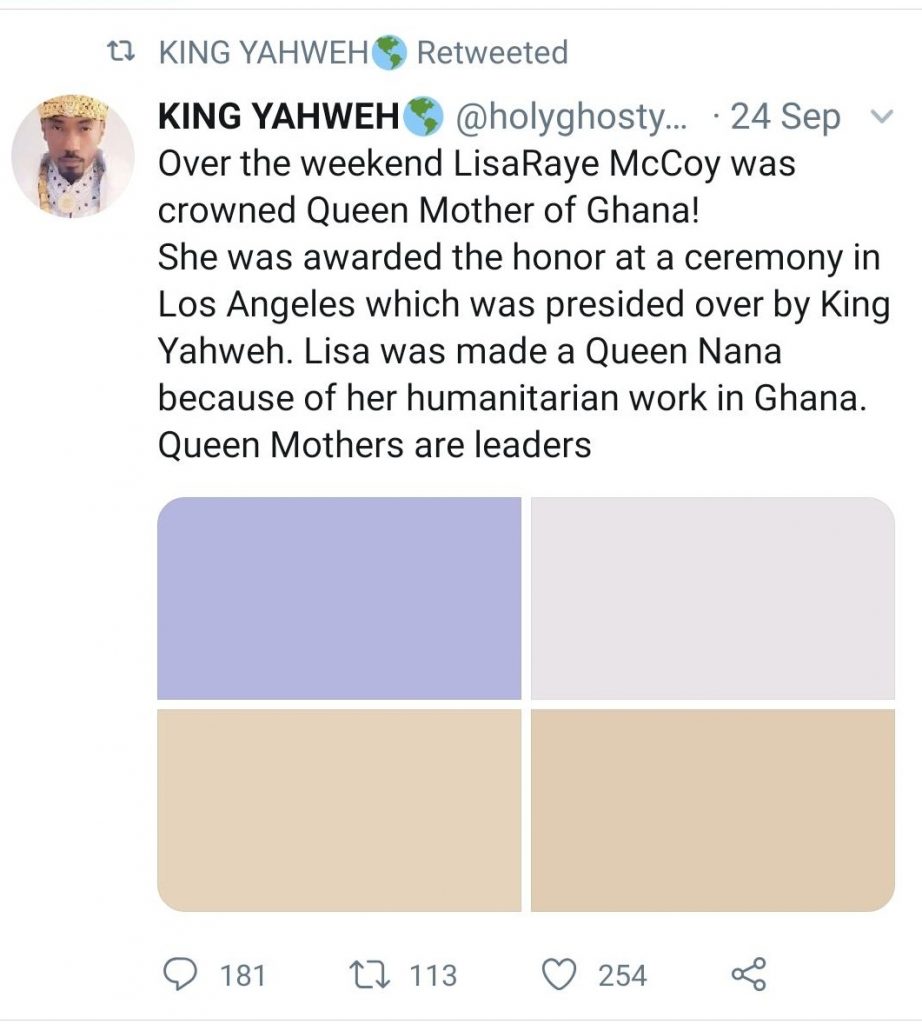 King Yaweh also posted photos of the ceremony on his Twitter page gloating about crowning LisaRaye McCoy ‘Queen Mother of Ghana’. With Twitter users poking wholes into his claims and his authority, the ‘King’ has since made his Twitter account private. 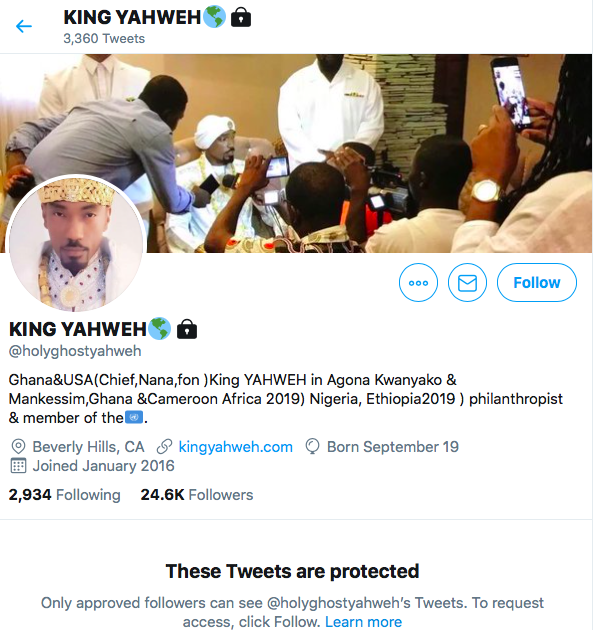 So who is King Yaweh?

“THE IMPERIAL MAJESTY KING YAHWEH, affectionately recognized as King YAHWEH The Holy Ghost,  is the founder of the Kingdom of YAHWEH and several organizations established to assist individuals who cannot assist themselves.  The Imperial Majesty King YAHWEH was duly crowned and ordained by YAHWEH as the Imperial King.  Also, His Majesty was officially enstooled as Chief (King) in April 2015, and His kingship hails out of territories including the regions of Mankessim Traditional Area, and Agona Kwanyako, Central Region, Ghana.

He is the first person in Ghanaian’s history to be enstooled in two different villages in the same lifetime. His stool names in each community respectively are Nana Edu Ababio, Chief of the Mankessim Traditional Area, Central Region and  Nana Nyarko Adu-Asare II Chief of Agona Kwanyako, Central Region. His Majesty,  The Imperial King YAHWEH, The Holy Ghost, has known residences in cities within the United States including Beverly Hills, Atlanta, and Miami. The Kingdom of YAHWEH is a faith-based organization/movement that believes in identifying with people today, while not judging the critically misunderstood person of yesterday.

His Majesty vehemently promotes the simple truth that everyone deserves a second chance in life to make better choices and welcomes people from all walks of life regardless of race, creed, culture or religious beliefs. The Kingdom of YAHWEH serves as freedom’s global bridge to peace and prosperity for all nations to connect, network, and collaborate in fostering a better tomorrow for all people. His Majesty’s focus includes assisting the communities in the redevelopment of distressed communities and generating essential services to enhance the quality of life….”

Most of these details cannot be verified.

The “Lioness of Africa,” Wiyaala has been invited to join the Recording Academy’s class of 2022. END_OF_DOCUMENT_TOKEN_TO_BE_REPLACED

Burna Boy has revealed in an interview that American R & B star Toni Braxton gets 60% of the royalties of his last single ‘Last Last.’ Burna Boy made this revelation when answering questions of how the single came about while appearing on a podcast. END_OF_DOCUMENT_TOKEN_TO_BE_REPLACED

Ghana have been banned from competing in the next two editions of the FIFA U17 Women’s African Qualifiers and fined $100,000 by the Confederation of African Football. END_OF_DOCUMENT_TOKEN_TO_BE_REPLACED

Although the music industry in Ghana is heavily dominated by males, there are a few young women, pulling their weight, and rubbing shoulders with their male counterparts. END_OF_DOCUMENT_TOKEN_TO_BE_REPLACED